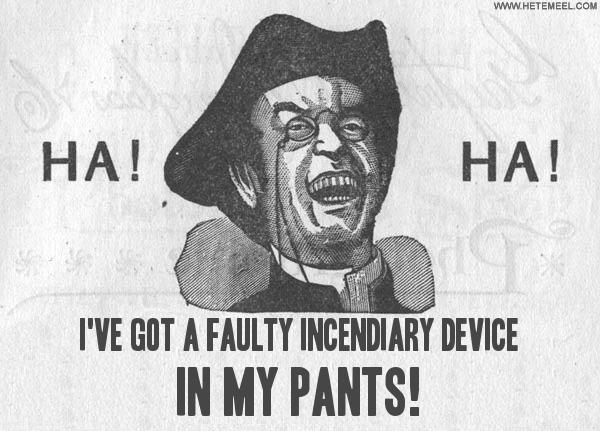 So there was a failed terror attack on Friday, and while that’s kind of scary and all, really, in this case, it’s mostly hilarious:

Per Ed Henry on CNN:

This administration has expressed skepticism of the color chart alert system. They’re concentrating more on improving security checkpoints and other measures at airports, not colors.

Susan Collins on Homeland Security committee says she’s expecting a briefing soon, wonders how the passenger got explosives on the plane to begin with, and if he actually does have ties to any terrorist organization.

Passenger Richard Griffith, who was on the plane, just said the explosives must have been in the guys pocket, ended up “in his crotch.”

Now that’s what I call a crotch rocket.

Naturally, it’s not good that the bomber, Abdul Farouk Abdulmutallab, got an incendiary device onto a plane. And  I’m dreading what new and exciting forms of security theater our friends at the TSA will come up with to make us feel safe that the guy or gal next to us doesn’t have a bomb in their crotch.

But honestly, I’m not all that worried. After all, here’s what evidently happened:

Federal authorities have been told that Abdulmutallab allegedly had taped some material to his leg, then used a syringe to mix some chemicals with the powder while on the airplane, one official said. Officials described the device as incendiary rather than explosive, pending tests by forensics experts at the FBI. Incendiary devices generally deliver less of an impact than explosive devices.

A man who said he was on Flight 253, Syed Jafry of Holland, Mich., told the Detroit Free Press that he noticed a glow three rows ahead in the Airbus 330, then smelled smoke. The next moment, Jafri recounted, “a young man behind me jumped on” Abdulmutallab.

So the guy got some chemicals on that could have maybe started a fire, but weren’t explosive. That’s not particularly scary. Oh, sure, it would be frightening in the moment. But you can’t bring a plane down with an incendiary device. Not even close.

In a way, this is the sort of “attack” that proves that terror countermeasures are working. If this is the best al Qaeda and its sympathizers* can do…well, it’s pretty pathetic. Basically, they’re as frightening as your high school friend who discovered you can set hair spray on fire. Both could hurt someone, other than themselves. But that would be more by chance than by design.

No, this attack is not reason to panic. It’s reason to laugh long and hard at those who want to scare us, reason to invoke bad double entendres about this wannabe’s crotch fire, like the one in this sentence. And most of all, it’s reason to cheer the demise of al Qaeda, a truly terrible organization that now has been reduced to setting small fires. I just hope no terrorist decides to egg my house. That could be horrible.

–
*The guy evidently claims to be with al Qaeda, but there’s reason to think he might just be self-aggrandizing.