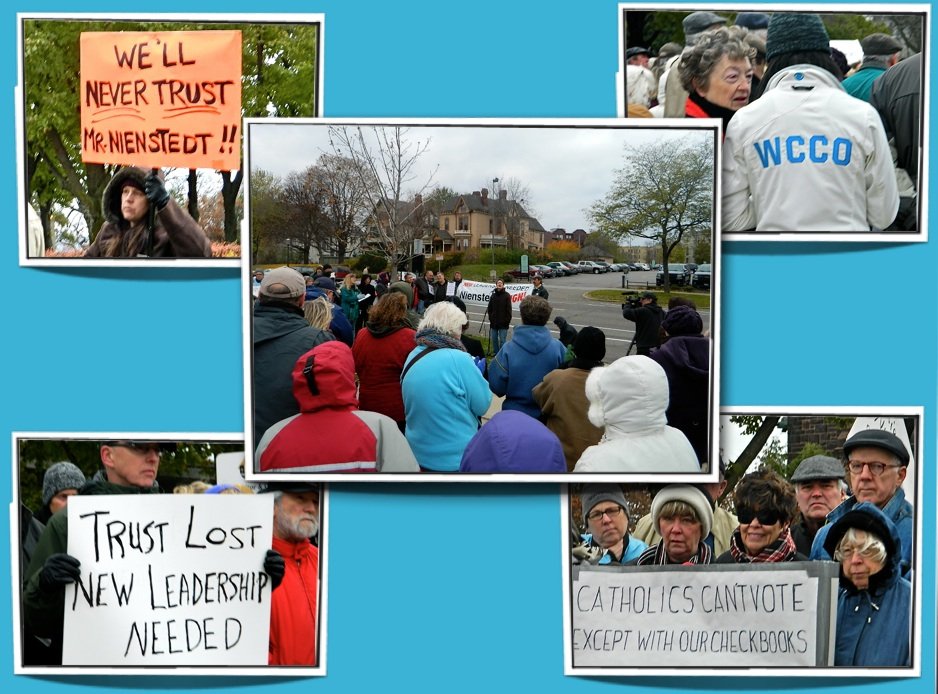 The Head of Catholic Church, Pope Francis is leading in a new direction that moves from a preoccupation with sex and back to the principles that Jesus taught – like caring for the poor. However, the head of local Catholic Church, Archbishop John Nienstedt, is the ultimate in a preoccupation with sex. Not only has Archbishop Nienstedt been involved in condemning gays and condemning women, he lobbied against the Child Victims Act that removes the statute of limitations for child sexual abuse cases going forward. One of Nienstedt’s priests has been convicted of child molestation but went free because the statue of limitations ran out. Over a million church dollars has been spent since since the year 2000 in lobbying for laws that allow priests to get away with sexual crimes while trying to force sexual laws on everyone else. Not only did the Archbishop Nienstedt coverup and defend priests accused of sexual crimes, he rewarded them with extra funds. His actions put others at risk.

While many have left the Catholic church, an amazing grassroots group called Catholic Coalition for Church Reform (CCCR) is striving to reform the church from within. Even on a cold blustery day, many brave souls gathered to ask Archbishop Nienstedt to resign and to urge people to write to the Papal Nuncio about the choice for the new pope (address at bottom).

The CCCR wants Archbishop John Nienstedt to resign from the St. Paul-Minneapolis Archdiocese after the way the church handled accusations of sexual misconduct. The most profound statement is coming from Bob Beutel, “We need healing, but healing cannot begin with the knife still in the wound.” Indeed as victims speak out and church priests have not been brought to justice, the case for resignation grows. New allegations have added more concern. Basically, the Archbishop has tried to make priests untouchable by law, while the CCCR holds that “Religion is no defense for criminal actions.” What is even worse, is that no warning, no supervision and no controls were put on the priests in question. In fact, at least one priest was given immediate retirement with extra money and complete lack of supervision.

Surprisingly, major media is covering this. Kudos to Star Tribune for actually covering the lobbying expenditures although the article avoids mentioning Archbishop Nienstedt’s name. Kudos to MPR for the series of articles. It actually looks like real journalism. I am so surprised at the coverage. The coverage means that it is less likely that the Catholic church will get away with coverup again.

It is looking to be more likely that Archbishop Nienstedt will resign because Catholics are voting with their donations. Some especially rich donors are also speaking up. From Star Tribune LETTERS:

Now the money is speaking to the power.

In an article that lacks local precedent (“Some rich donors turn from archbishop,” Nov. 7), the Star Tribune quotes five local, prominent Catholics, one anonymously, who have expressed disaffection with Archbishop John Nienstedt’s leadership and suggest that further financial support may not be forthcoming. These are wealthy people who can build buildings, write checks with four or more zeros, and are tapped to chair fundraising campaigns such as the one for $160 million that is currently under review.

One should look to money or power to understand how the Catholic Church, a worldwide institution, goes about its decision making. Simply put, the two are equivalent. As local money dries up, power is speaking, which will very likely lead soon to the archbishop’s demise.

One of the problems is that normal church donations do not just go to the local church, but also go to the Archbishop Nienstedt’s lobbying effort to prevent priests from facing the law and even rewarding priests who have been convicted of breaking the law. The financial books are cloaked in secrecy and the reform group CCCR is not part of the financial process. Therefore some good Catholic non-profits like St. Joseph’s Home for Children might suffer because who knows how much that Archbishop Nienstedt can divert funds to protect priestly privileges of sexual perversion.

The worst of all of this is the coverup. One can understand that there are priests who break laws. However, when the person who is the head of the local Catholic church protects and rewards them, what does that say about the true nature of Catholic church? Does the word get around and attract more people to the priesthood who would use it as cover for sexual perversion? Isn’t the Catholic church essentially hanging out a sign saying, “Sexual Predators R Us?”

Archbishop Nienstedt must have hired that public relations firm because he uses so many reassuring phrases like “forthcoming”, “taking appropriate steps”, “restore trust” and “we take these matters very seriously”. All the possible actions that are not actually active actions are being taken like “outside firm”, “task force”, “review” and “new polices”. This a repeat smoke-and-mirrors performance of last time the church faced this same controversy. Remember this:

In 2002, Archbishop Harry Flynn of St. Paul and Minneapolis spearheaded the passage of the 2002 “Charter for the Protection of Children and Young People,” the U.S. bishops’ landmark effort to overcome a scandalous legacy of clergy sexual abuse of minors and failed episcopal oversight.

The way changes happens in the Catholic Church is through an office of the Papal Nuncio. So if you care about this, then you should write. You should especially write if you are Catholic or were Catholic.

Here is the contents of the card the CCCR provided:

Please write to the U.S. Papal Nuncio about the qualities that you want in a bishop or a candidate that you recommend. He has said he welcomes letters from individuals.

Do write and make your voice heard!