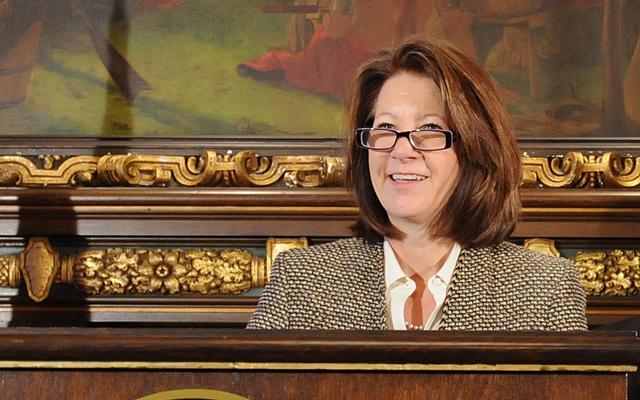 Commissioner Jesson says the majority of families receiving assistance “do not fit a pattern of fraud, abuse and misuse.’’ (MinnPost photo by James Nord)

Even the title is politically charged. As Welfare Reform 2.0 inches its way through the Legislature, it’s hard to imagine Gov. Mark Dayton signing legislation that puts up so many obstacles for low-income families seeking government help.

The DFL governor has not spoken publicly about the Republican plan – and his spokesperson says he doesn’t plan to, for now – but his commissioner for the Department of Human Services has now denounced it in a letter to state lawmakers.

Dayton may be waiting to see how far the legislation goes before jumping into another fight with GOP legislators, especially as no significant action has been taken yet in the Senate, but Commissioner Lucinda Jesson isn’t holding back.

Republicans counter that the legislation is “intended to tighten up” the assistance programs and that eliminating waste and fraud translates into more money for the poor.

“This is really about the integrity of dollars for people in need,’’ Gottwalt told me recently. “Minnesotans want to help the people truly in need.’’

But Jesson says the majority of families receiving assistance “do not fit a pattern of fraud, abuse and misuse.’’ Rather, she says, they are responsible adults trying to care for their families and “achieve self sufficiency.’’

Taking on GOP early in session

“The memo is pretty unprecedented in tone and timing,’’ says Jessica L. Webster, staff attorney for the Legal Services Advocacy Project, one of many advocates for the poor. “You don’t usually see leadership like this early in the [legislative] process.’’

Jesson, calling MFIP “the state’s primary resource for moving children out of poverty” by reconnecting parents to and supporting them in the work force, cites a 62 percent increase in the number of Minnesota children in poverty between 2000 and 2010, which figures out at an increase of 50,000 youngsters.

She says she fears the numbers of poor children will grow if the legislation is passed and have long lasting consequences since studies show children growing up in poverty face the greater likelihood of school failure, criminal activity, significant health problems and less success throughout life.

Currently a family of one unemployed adult with no other income and two children receives $532 in cash and $473 in food support monthly, she says.

“I understand that the bills seek to address perceived problems with parents [use of drugs, lack of effort to obtain employment], yet the harm of these policies falls disproportionately on children,’’ she writes.

Further, she says, such “burdens” “are not imposed equally on other people receiving state benefits such as unemployment insurance, state-funded tax credits or payments under state contracts.’’

Jesson points out that DHS is in the process of implementing “extensive” anti-fraud and new eligibility changes made to the assistance programs last summer with the 2012 to 2013 budget agreement, including measures to prevent purchase of alcohol and tobacco with a benefits card.

She says she created the Office of the Inspector General to prevent and investigate fraudulent activity in human services programs.

Further, she characterizes the majority of persons on these financial assistance programs as working at very low-income jobs or having serious health problems limiting their abilities to hold full-time jobs, or being new mothers or recently unemployed.

“These are children and families who, through their hard work, deserve a chance to climb the ladders out of poverty…’’