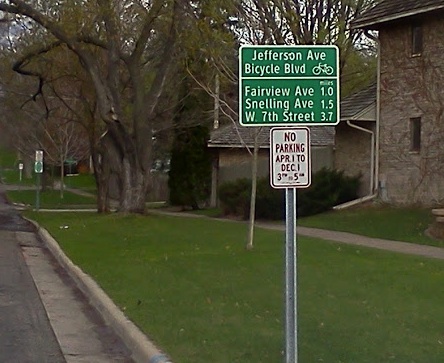 “I’m beginning to know what Charlie Brown feels like,” lamented Dave Pasik.  “I keep running to kick that football, and the last minute, Lucy pulls it away.”

At Wednesday night’s St. Paul City Council meeting, Pasik’s football was the Jefferson Avenue Bikeway, or at least parts of it.  Charlie Brown was the cyclists, Jefferson Avenue residents, disability advocates, and pedestrians.  Lucy was Council Member Chris Tolbert and the rest of the City Council. On April 4, in the latest move in a series of meetings, plans, revisions, and amendments, the council voted unanimously to approve an amended resolution for a Jefferson Avenue bikeway that removes several of the traffic circles that had been approved previously.

Full disclosure: I am a member of multiple cycling advocacy groups and a year-round bicycle commuter.
Editor’s note: Where is the line between being a citizen and involved, and being a detached and neutral reporter? For citizen journalists, that can be a tough call. In this story, Mike got involved, and spoke at the hearing, but we think he turned in a good story that reports what all sides had to say. If you disagree, tell us so in the comments — or write a longer commentary for the Free Speech Zone. 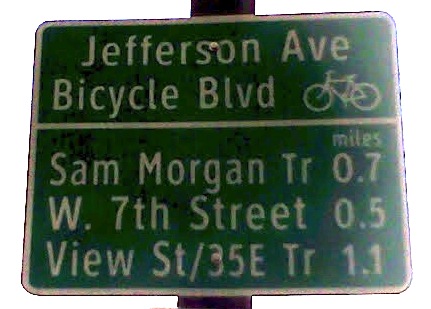 The Jefferson Avenue Bikeway, a bike boulevard  planned for Jefferson Avenue from Mississippi River Boulevard  east to the High Bridge, has a lot of history.  At about 2:31pm Wednesday night, local blogger Bill Lindeke tweeted:

“Big St. Paul meeting at St P city hall at 5:30,. Last minute amendment stripping out much of the Jefferson bike plan: show up if you can.”

Down at City Hall before the meeting began, Ward 3 Legislative Aide Nicole Wittig-Geske was working double-time to get people copies of the amended Jefferson Bikeway resolution (PH  12-69) and to sign them up to speak for or against the resolution.  The amendment removes most traffic circles, and modifies the crosswalks and pedestrian signals at some intersections.  This was a complicated question, as many bikeway supporters were for the resolution before amendment but against the amendment. Some people opposed the bikeway altogether, while others supported the amendment that would make change in the bikeway plan. 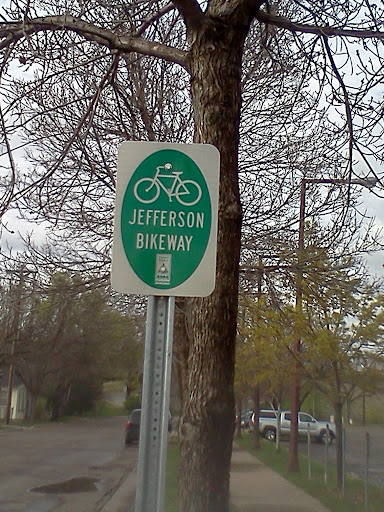 After Erickson’s presentation, the public comment portion began.  There were four speakers against the bikeway resolution in any form, 16 for the resolution without amendments, and about four for the amended resolution. Those opposed spoke first.

Gary Fisher of Saratoga Street spoke first against the bikeway, saying, “We don’t have any money.”  Colleen Kelly of Juliet Avenue said, “I resent my neighborhood being used as a social experiment.”  Larry McEntire, of Jefferson Avenue, said he “objects to expenditure of additional funds on Jefferson,” and that it was fine the way it is.  He also said that advanced stoplights are unnecessary because “exercise bikers don’t stop anyways.”

The next two speakers had signed up to speak against the resolution, but were in fact against only parts of it.  Brian Valento of Macalester Avenue said he was pro-everything in the resolution except what he called “concrete crop circles.”  Jessica Treat, Lafond resident and executive director of St. Paul Smart Trips, said that “’good enough’ misses the point… calm and safe streets.”  She said the last minute amendment “subverts public process.”

At this point, it became clear that the division of those for and against the resolution was confusing, and it was decided to give each remaining speaker two minutes.  Gary Fisher left the room shaking his head, as it became clear that instead of each side having 15 minutes as planned, the people for the bikeway would have more time than those against.

The first speaker in the for-bikeway-against-amendment group was Amber of Sargent Avenue who spoke with her baby in her arms.  She said she chose her residence based on its location, proximity to daycare, and road safety.  She said her perspective of what safe is changes dramatically when there is a child trailer on her bike.

Deb Jeston of Jefferson said that she bikes on the sidewalk because as is, “on Jefferson, cars rule.”  Patrick Kampy  of Jefferson expressed disappointment in the “eleventh hour amendment.”  Elizabeth Fable of Jefferson said she was “proud to live on the Jefferson Avenue Bikeway” and was disappointed by the loss of traffic circles. Bob Spaulding, the St. Paul Transportation Committee Chair and the Planning Commissioner, said the resolution before amendment was approved by the committee 14-0 after much deliberation and should not be changed.

The final speakers were a few people who had signed up in favor of the amendment.  Andy Singer of Berkeley Avenue said he likes traffic circles and said that the percentage of cyclists as commuters far exceeds the money spent on cyclists.  Jim Skoville, professor emeritus of industrial relations at the University of Minnesota, said he was in favor of the advanced pedestrian stoplights as people with mobility issues have difficultly crossing fast enough on the old stoplights.  I spoke last, saying that the bikeway will be used by Minneapolitans as well as St. Paulites, and that I disapproved of the amendment, but welcomed the overall resolution.

Tolbert then spoke on his decision to amend the resolution.  He said that there were five viewpoints to accommodate: 1. in favor of a complete bikeway, 2. in favor of calmer and less traffic, 3. status quo, 4. anti-roundabout, and 5. fiscal conservatism.  He said he did not want residents to feel like the decision was shoved down their throats, so he compromised.

In the end, Tolbert’s amendment was passed.