And so, without further ado, it’s time to play Who’s Up, Who’s Down, and Who’s Out? 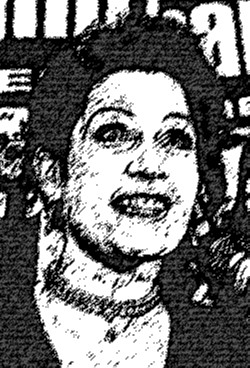 Bachmann is clearly the big winner here, and I think this is more important that people realize. Yes, Rick Perry jumped into the presidential race today, but remember: Iowa comes before New Hampshire. And Bachmann is clearly in good shape in the Hawkeye State. If she can hold this advantage and win in February, she could end up positioning herself as the default far-right candidate in the GOP race. And no, I really can’t believe I just typed any of that.

Bachmann has built a strong organization in a caucus state, and organization wins caucuses. She could still implode, à la Howard Dean in 2004. But right now, she has to be the favorite in Iowa, and that means she has to be in the top two or three candidates in the race right now — and one with a real, legitimate chance to be the Republican nominee. I’m scared too, friends. I’m scared too.

Paul finished a strong second in the straw poll, proving what we already knew: Paulbots travel well, have little to occupy their time, and will do anything to propel their guy to a meaningless second-place finish in a straw poll.

That’s not to say that this wasn’t fairly impressive, mind you. In 2007, Paul took 9 percent in the straw poll; he’s jumped over 20% here. I don’t expect Paul to win Iowa or even place third, but he’s showing himself to be exactly where he was in 2008 — a candidate who can consistently draw 20 percent  in race after race. Not enough to win the nomination, or even really compete for it — 20 percent is both his floor and his ceiling. But enough to be a continued presence in the race, all the way to the convention.

Perry’s sixth-place showing is impressive, given that he just jumped into the race today and has no organization in Iowa. It’s especially impressive given that he beat “front-runner” Mitt Romney (more on him in a minute).

What will be interesting over the next few months will be how Perry and Bachmann compete for the right wing of the party. The candidate who comes out on top will, in my opinion, probably get the GOP nomination, as they appear hell-bent on selecting the candidate with the most radical positions possible. For Perry to win, he’s going to have to either beat Bachmann in Iowa, or at least come close, and then finish her off in South Carolina. He has some strength there, obviously. It will be interesting to see how much.

Santorum’s fourth-place finish is a sign that he’s not quite dead yet. Yes, he’s well behind Bachmann, but he surprised by surpassing Cain, and that’s a sign that he has some level of organization. That said, he still is at best a distant second to Bachmann in the hearts and minds of the far right, and with Perry entering the race, that’s not where he needs to be.

Cain finishing fifth, behind Santorum, is a disaster. He’s clearly fallen well behind Bachmann in the race for the standard-bearer of the right, and is arguably now behind Santorum and Perry, too.

This doesn’t mean Cain will quit the race, of course. But his disappointing showing is going to cause some of his supporters to start looking at Perry, Bachmann, and Santorum, and that quickly becomes a vicious cycle. Cain will have to do something to stop the bleeding, and very soon.

Romney’s campaign won here in 2007, but recognizing the way the wind was blowing, they chose not to actively compete here in 2011. That was a mistake. Because Romney’s name was on the ballot, and yet he came in behind a write-in candidate in Rick Perry.

Romney could have finished in fourth or fifth place and shrugged it off; his big early state is New Hampshire, and everyone knows it. But by finishing seventh in a state where he does have at least some organization, he shows what we all knew: that his support among GOP activists is weak at best.

Mitt will undoubtedly try the Giuliani gambit here, arguing that because he didn’t compete, it doesn’t really count. But that didn’t work for Giuliani in 2008, and I doubt it will work for Romney here.

It was a nice run for Gov. Timmy, but he bet everything on a solid finish in the straw poll, and he got crushed. Yes, he finished third, but he was more than doubled by Bachmann, and that’s not the position he needs to be in.

Granted, Pawlenty’s campaign in some ways is trying to emulate John Kerry’s in 2004 — hang around, seem vaguely acceptable to everyone, eventually win by default — but with Perry’s entrance into the race, his room to do that is growing smaller, and he seems to lack any real momentum.

At this point, I don’t see how Pawlenty puts things right. I think his campaign is in a death spiral, and I don’t think there’s any way to pull out. And I find this hilarious. Absolutely, positively, hilarious.

Gingrich has completely imploded. His eighth-place finish — he won just two percent of the vote — is down at the level of complete pretender. He has no significant organization and no real plan to win the nomination. At this point, I can only conclude that Newt is running to draw attention to himself, so he can get booked on more talk shows. He certainly isn’t running to win.

Will the media stop pretending that he’s a viable candidate now? Probably not. But when you get just 69 votes in the straw poll — less than half of one percent — and when those results mirror what your poll numbers have shown in state after state…well, at some point, we all just need to admit that Huntsman never was going to be a serious candidate for president, not in the GOP as currently constituted.

I have no idea why McCotter thought he could win the presidency, and neither does anyone else. The fact that he drew only 35 votes proves it.

I haven’t yet seen what Palin’s totals were — I assume she’s in the “Other” group — but it certainly isn’t significant. And that tells you everything you need to know. No, she wasn’t going to get many votes given that she wasn’t campaigning at all. But you’d think that if she had any real hope of winning this year that she would have received at least some tepid support, around, say, the level of Rick Perry, or at least Newt Gingrich. Especially as she brought her on-again, off-again bus tour to Des Moines in the days leading up to the event.

That she drew dead proves that the GOP now has the same opinion of Our Lady of Wasilla as everyone else. They know she’s a fraud, a grifter, an attention-seeker. They know she has no intention of actually running for president. And they know better than to waste their time on her anymore. We should follow their lead.