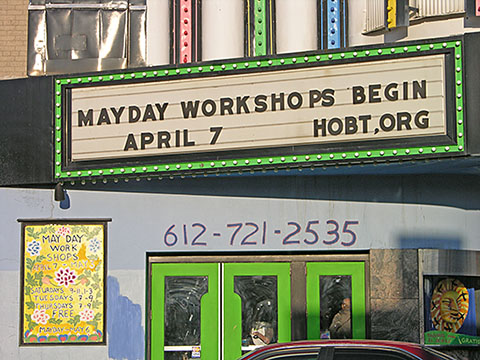 MayDay Parade, Ceremony, and Festival, is a celebration coordinated by In the Heart of the Beast Puppet and Mask Theatre of Minneapolis. Held on the fist Sunday in May since 1975, HOBT (Heart of the Beast Theatre) presents a parade of puppetry and imagination traveling approximately 11 blocks into Powderhorn Park in south Minneapolis. The parade culminates with a ceremony welcoming spring and our shared community life. In the preceding month of April, the theatre becomes a giant workshop of artistic wonder as the community builds the costumes and props for the pageant and parade. The entire metroplitan park is filled with a Festival of progressive groups and music and drumming of a vibrant citizenry. When I first obtained a digital camera, MayDay was one event I immediately planned on photographing. So from 2004 I have been in Powderhorn Park on the first Sunday in May. In 2008 I attended my first MayDay public workshop. I have attended nearly every day a public workshop was held since my first exposure.
Everyone is invited. A storyboard contains a visual representation of what the year’s festival and parade is using as a theme. Different sections (parade units) present interpretations of the concepts of the story. You are invited to listen to a narrative of the storyboard in the foyer and then check out and possibly join a section. This is a very fluid environment and your creativity is welcomed and encouraged, so you will not be confined to your initial choices. My guess is that you will be able to learn and to contribute in as many sections you vist.
The public workshops are held Tuesday and Thursday evenings in April from 7 to 9 p.m. including May 1st and 3rd. On Saturdays the public workshops happen from 9 to 11 a.m. and from 1 to 3 p.m. Details at hobt.org.

This years theme is about Transition Town concepts, a movement to educate people about reshaping our living towards a sustainable culture. realigning our thinking and feelings – “Break the Spell”; reaffirm our abilities to affect changes – “Make Do”; and celebrate life in all forms with – “Surround of Light”. Come and add your voice, and be sure to wear painting clothes.