Pastor Dave Greenlund describes the 100-member congregation at Peace Lutheran Church in Lauderdale as “a creative bunch.” That ingenuity was tapped recently as church members found a way to insulate the cold, concrete basement of this 57-year-old building by using some recycled materials and a little chance inspiration.

The church basement has 13 below-ground-level windows along its north and south sides. “Instead of individual window wells, the builders poured a retaining wall 2 feet out from the building and dug 5 feet down,” Greenlund said. “Basically there was a ditch running along the length of the building.”

Light poured into the basement, which houses a kitchen, restrooms and a social hall, but between each window are 8 feet of uninsulated concrete. “The walls would virtually freeze every year,” he said. Heat escaped from the room and that made it hard to use the lower level.

The church needed to do something to rehab the space, but it had limited funds and church members did not want to lose the light from the windows. The answer: a combination of recycled materials and low-cost homemade solar tubes.

First, Greenlund found some overstocked metal roofing material at Siwek Lumber and Millwork in northeast Minneapolis (cost: $200). He searched craigslist and found recycled foam that had been torn out of a building in Rogers, Minn. (cost: $200).

“We framed an enclosure [along the outside wall] with the metal roofing and added 2 inches of recycled foam,” he said. “Then we were back to the light problem.”

The insulating enclosure blocked all light from the windows. Greenlund had installed solar tubes in another building and knew they were a good solution. The tubes funnel light into a room and take less space than a sunroof or window, but they cost a minimum of $200 each.

“We couldn’t afford that,” he said.

Greenlund began looking on line for materials to build his own light tubes but had no luck. Finally, he visited Ax-Man Surplus Store on University Avenue and found some plastic sheeting used for funhouse mirrors: bendable 30-by-40-inch sheets of thick white plastic that had a mirror-finish on one side. The sheets were $3.99 each and were split in half to make two tubes per sheet (cost: $2 per tube).

Then came the biggest obstacle. Greenlund needed clear plastic domes to put on top of the tubes. Solar tube manufacturers would not sell materials separately. “I went to the Dollar Store to Ax-Man and I couldn’t find anything,” he said. But one day, when he was in the church kitchen, he came across four plastic salad bowls that he thought would work perfectly.

The next Sunday he made an announcement during the church service: If congregants had clear plastic salad bowls at home they would like to contribute to the project, he’d replace the bowls with colorful ones. 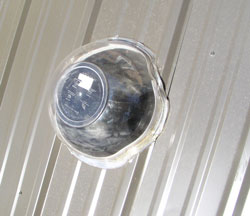 During the church social hour after that service, a church member made a trip to Party City on Fairview Avenue in Roseville and bought 15 12-inch clear plastic bowls (cost: $8 each).

“She was concerned that [the donated bowls] wouldn’t match,” Greenlund said. “We paid $120 total for the [new] bowls. We only needed 13, but we have a little extra in case one cracks.”

It took two days for Greenlund and church members Dennis Murnyak, Glen Haberdank, Mike Casey and Roland Ragoonanan to finish the project on the south side of the building. At press time, the north side was not done, but visitors to Peace Lutheran’s basement have taken note of the warm air in the basement—even when the furnace is turned down—and the sunlight that comes in through the tubes.

“The return on this stuff is so great,” Greenlund said, “and it’s so fast.”

Total cost of the project was $520, Greenlund said. Had the church bought new materials and contracted the work, the pastor estimates the cost would have been $5,000 to $8,000.

Some of the metal trim for the project isn’t an exact match to other materials used on the building, Greenlund said, “but why are you chasing perfection here? It’s a no-win proposition.”