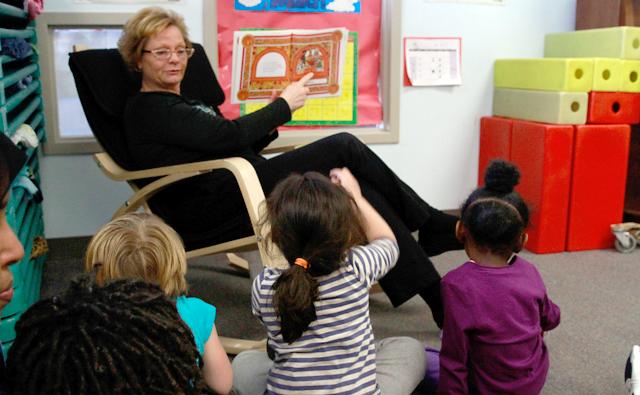 Preschool teacher Denise Taylor reading to a class of 4-year-olds at the Early Childhood Education Center at the Midtown YWCA. (MinnPost photo by Terry Gydesen)

Among the crowd of 4-year-olds pulling on warm jackets and stuff like Spider Man gloves and fluffy pink scarves for outdoor play Tuesday at the Early Childhood Education Center at the Midtown YWCA in Minneapolis were two antsy little boys with energy to spend.

They tugged on snow pants, coats and hats. Then, as little boys all over are wont to do, and I as the mother of two boys remember only too well, one jabbed the other — not hard — and maybe just to get his buddy’s attention.

“Stop hitting me,’’ said the recipient of the unwanted action. The hitter stopped.

This was a lesson partly learned.

There was unwanted touching, but the perpetrator stopped the behavior when asked to, likely thanks in part to lessons taught at this nationally accredited and Parent Aware four-star-rated early childhood education program.

High-quality preschool education programs like this at the Y are more than learning ABCs and numbers, they’re also about learning good behavior and how to get along with peers, early learning experts say — skills that serve a child well upon entering kindergarten.

About 50 percent of Minnesota children begin kindergarten not primed to learn, according to a recent report from the Minnesota Department of Education, but early childhood education programs could change that proponents maintain.

The Y’s Midtown program is accredited by the National Association for the Education of Young Children and though it includes a mix of middle- and lower-income families, it also qualifies as one of 12 Hennepin County Strong Beginnings Child Care Program sites. Families in Strong Beginnings receive subsidized child care.

At the Midtown Y program, a racial and ethnic mix of families, you can see how far the Walrus class of 4-year-olds has come since last fall when school started, says Deby Ziesmer, vice president of early childhood education at the Minneapolis YWCA.

Their vocabularies have increased, boosted by all the books read to them at school, as has their knowledge of the world, Ziesmer says. And they’ve learned another important skill, if they hadn’t already known: to ask questions, she says.

Learning to get along

Two little girls in class this very day lifted a world globe from a classroom shelf so teacher aide Iman Mohamad could point out her Somali homeland to them in comparison to Minnesota’s geographic location and tell them more about her life there.

Children are also learning, Ziesmer acknowledged, “how to get along with each other.’’

“A lot of times when children start with us, they don’t know how to play’’ with one another, added Mandi Zaccardi, director of the center. They are more accustomed to being caregivers to younger siblings, she said.

About 30 minutes before the touching incident, preschool teacher Denise Taylor had read to the 12 children in her class a lively storybook stressing all the wonderful things hands can be used for but cautioning with an oft-repeated refrain that every child joined in saying: “Hands are not for hitting.’’

Use words instead, teacher said.

Angela Hernandez is full of praise for the program, which her granddaughter Emmalena Espinoza, attends, and for Denise Taylor, the girl’s teacher.

The child “knows how to count to 20 and she’s only 4 years old. She knows all her colors. She knows how to write her first name and she’s working on her last name. She’s trying to read books,’’ says Hernandez, who says her family wouldn’t have been able to afford the program without tuition help from Hennepin County.

Besides that, “They’re the ones that gave me the red flag she needed speech” therapy, Hernandez said about her granddaughter. She’s glad staff did. “Now she says ‘yellow’ instead of ‘jello,’’’ Hernandez said.