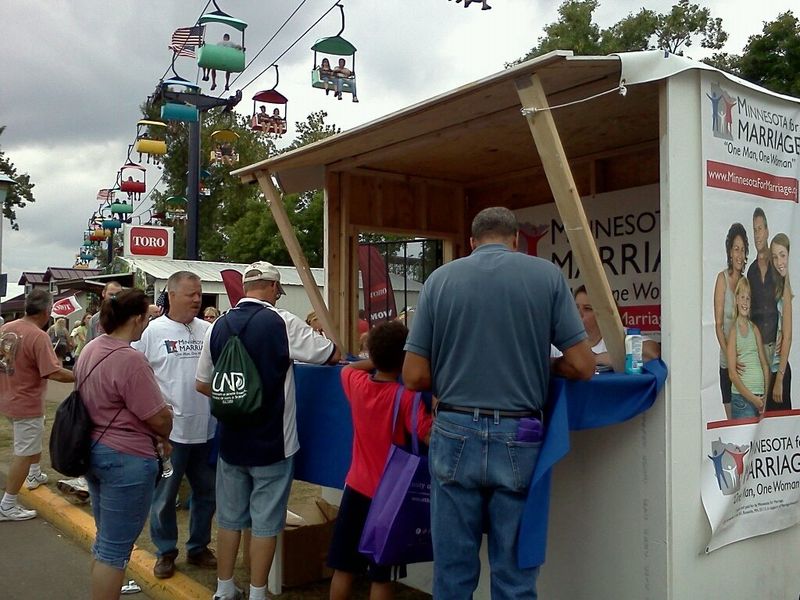 As a dedicated chronicler of the right’s congenital inclination to paint itself as the victims no matter who it picks on, Bluestem is getting some good belly laughs from the “What if” school of mythmaking reacting to Sunday’s Glitzkriegat the State Fair.

Dismayed by the sudden appearance of a Minnesotans For [Discriminatory] Marriage booth on a grassy boulevard, clever giltterati dropped the sparkly on the booth from the Minnesota State Fair’s signature skilift ride. The City Page’s Roy Pratt noted that

As usual, Nick Espinosa chose the least violent, most colorful protest yet known to man.

The template response to glitterbombing is “What if these barbarians dropped something other than glitter?” with the expectation that the audience will then froth out at the imaginary image of acid or knives or fill-in-the-blank.  And already, a spokester for Minnesotans for Marriage passively aggressively whined to WCCO/CBS Minnesota and whomever else will listen about the “tolerance” from “the other side.”

Bluestem gives a hearty thumbs up, though, to Tom Emmer for creativity in a post at True North, Emmer: I Guess The Mainstream Media Only Cares When Bad (and Potentiall​y) Dangerous Behavior Is Against Their Point Of View…:

When is this guy going to be charged?  Why do our so-called “reporters” give an attention-hungry child what he wants?  Why are the reporters not questioning authorities about their hands-off approach to this assaultive behavior?  Yes, we are just talking about glitter but that should not be the issue.  If an immature young man like this one was dropping glitter on a high school student in Anoka, wouldn’t we hear the media cry for more bullying laws. . . .

In short, let’s not talk about the glitter, but let’s imagine that LGBT activists were dropping glitter on gay students, why then….

One simply can’t argue with that logic, merely identify it as the chimera it is, a hybrid of Tom’s legal horse puckey and High Post-moronic Style. If glitterbombing wasn’t what it is, it might indeed be something else.  (Emmer doesn’t mention his own earlier close encounter at the Fair with Espinosa).

The ability of orators and statesmen like Tom Emmer to inflict the hypothetical on impressionable minds may be in large part responsible for the popular cliche: “It is what it is.” At a time in which some many wish to frighten us about what might happen, Americans need to be reminded of simple facts.

But even there, Emmer’s hypothetical doesn’t hit the target. After reading Andy Birkey’s excellent analysis this morning, A new cultural phemonenon, the ‘glitterbomb’ hits anti-gay activists at state fair:

The “glitterbombs” that have targeted Michele and Marcus Bachmann, Newt Gingrich and Tim Pawlenty were taken to the Minnesota State Fair on Saturday when Minnesota For Marriage, a group that opposes rights for same-sex couples, was showered with glitter from the fair’s Skyride. The glitterbomb phenomenon, homegrown in Minnesota, has also secured a place in pop culture. Fox’s hit show Glee is explicitly using the glitterbomb in its fall season promotional ads and the New York Times examined the phenomenon last week. . . .

The glitterbomb has quickly become a pop culture reference, especially following Fox’s decision to use it in its upcoming promotions of the hit show Glee. . . .

The ad makes direct reference to activist Nick Espinosa shouting “Taste the rainbow” as he showered presidential candidate Newt Gingrich with glitter at a book signing hosted by the Minnesota Family Council earlier this year.

No, Tom Emmer, the media wouldn’t be calling for anti-bullying laws. They’d be calling it the season premier of Glee.

Image: The M4M booth at the fair on Saturday.