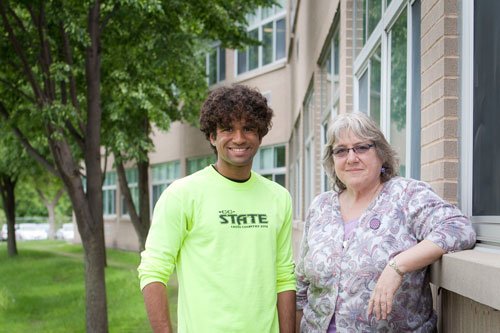 Kahn and Landrum brought their inspiration for a local ideas festival to St. Paul after attending the Aspen Ideas Festival in Colorado last summer.

Landrum was one of 12 American Bezos Scholars, high school students who survived a rigorous screening process to receive an all-expenses-paid trip to the prestigious Colorado festival. There, the students—each with a teacher from his or her school—rubbed elbows with heavy-hitters such as Supreme Court Justice Elena Kagan, world-famous cellist Yo-Yo Ma and Internet crowd-sourcing innovator Perry Chen, co-founder of Kickstarter.com.

Landrum’s and Kahn’s participation was funded by the Bezos Family Foundation, an education-oriented nonprofit run by the parents of Jeff Bezos, founder of Amazon.com. The two returned to Minnesota wanting to bring an experience similar to the Aspen Ideas Festival to the school.

Inspire MN’s mission is to provide a gathering that inspires, ignites passions and spurs students and community action, Landrum and Kahn said.

Several successful Minnesotans have been invited to share their stories on March 20. The speakers include polar explorer Paul Schurke, $1 Million Forever St. Paul Challenge winner Tracy Sides, children’s book author Kurtis Scaletta and visual artist Seitu Jones. The speakers will talk about their own inspirations, first attempts, obstacles they have encountered, the people who supported them and their ultimate success.

The community is invited to attend the event, which will be held from 1 to 6 p.m. in the school auditorium. Registration starts at 12:30 p.m. Participants must RSVP by March 15 to bigideasfestival@gmail.com. A $5 donation is suggested.

Kahn cautions that parking in the school’s lot will be difficult. Participants are encouraged to take the MTC bus no. 3, which stops at Maryland Avenue and Grotto Street, a quarter block from the school, or to park on the street.