A few nights ago I attended a Reconstructionist Jewish slash ecumenical religious service in south Minneapolis. The theme for the evening was human rights—more specifically, same-sex marriage and the Minnesota Marriage Amendment.

One of the folks I met was Tom White, and I’ll let him speak for himself. These comments are adapted from his remarks on February 10, 2011, during Marriage Equality Day at the State Capitol:

I am Tom White, who, with my Darlene, represents the very best of our Catholic upbringing. We stand with the Catholics for Marriage Equality of Minnesota and the many Catholics who, in their deepest conscience, believe in a God that not only cherishes but celebrates our LGBT brothers and sisters in their struggle for justice and equality for their families. 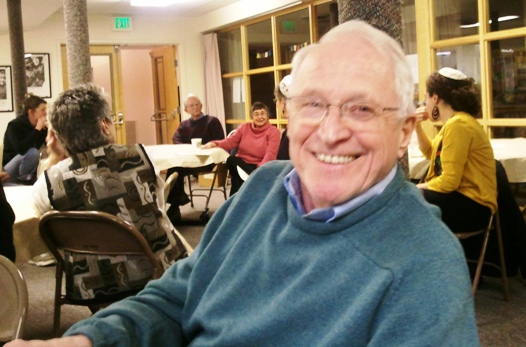 We are the proud grandparents of two wonderful boys, Mac and Morgan, ages 15 and 10, who happened to have two moms, one of whom is our only daughter. Mac and Morgan are good athletes, exceptional students, and love and respect their moms.

Last year for a school assignment Mac chose the topic, “Gay Marriage: The Arguments for Equality.” He wrote:

In an interview a particular politician stated that children raised in a home with gay parents will not be likely to succeed. I have found, however, in my experience, that I doing quite well, which I would hope undermines his argument.

Why should a fifteen-year-old honor student have to defend his family’s very existence?

My wish would be that every Minnesotan could spend just one day with a family like ours and experience the family bond of love and life that goes there . . .  the games, the schoolwork, the chores, the love, and the prayer.

We have two lucky boys. They are just a regular family but they have two nurturing moms, instead of just one.

We have exceptional families begging for equality.