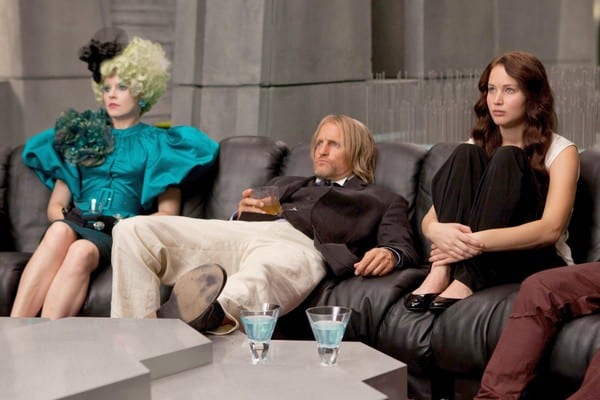 The year is…well, I don’t know exactly what year the universe of director Gary Ross’s and co-screenwriter Suzanne Collins’s film, The Hunger Games, takes place in, but it is sometime in the future: a very grim future. The United States does not look the same on a map or a globe as it does now. Instead of state lines, there are district lines. There are twelve districts in all, with a place known as the Capitol at the hub of this civilization called Panem.

The Capitol is where the most rich, fashionable people live. It is also where the government, led by the elderly President Snow (Donald Sutherland) dwells. Though this government may look glossy and well groomed on the surface, it has a venomous, reptilian contempt for the surrounding districts. There was an uprising by the districts against the Capitol many years ago. The rebellion was quelled, but as a reminder that the people of the Capitol are not to be messed with, an event called the Hunger Games is held every year. One boy and girl between the ages of 12 and 18 from each district are chosen by a paper ballot lottery to be a tribute in the Hunger Games. They are then shipped to the Capitol to prepare for the event, which is a fight to the death in an arena. 24 kids go in. One lucky (and likely traumatized) winner comes out.

In District 12, a place rich in coal and poverty, 16 year-old Katniss Everdeen’s (Jennifer Lawrence) worst nightmare slaps her on the face. Her younger sister, Primrose (Willow Shields), is chosen as the girl tribute. Overcome with horror, Katniss volunteers to take Primrose’s spot. Joining her as the boy tribute is the local baker’s son, Peeta (Josh Hutcherson).

After an hour to say goodbye to her family and friends, including her best friend, Gale Hawthorne (Liam Hemsworth), Katniss is put on a train to the Capitol. Once there, Katniss is put through a whirlwind of a preparation agenda, all the while aided by her organized, pink-wig wearing scheduler, Effie (Elizabeth Banks); her kind, calm clothes and makeup overseer, Cinna (Lenny Kravitz); and her drunken mentor, Haymitch Abernathy (Woody Harrelson), who is a former survivor of the Hunger Games.

The acting in this film is pretty superb across the board. Casting director Debra Zane did a nice job of bringing in a lot of recognizable faces and a lot of talented unknowns. Lawrence is terrific as Katniss. She is a refreshing heroine for modern cinema. Katniss hunts with a bow and arrows, she provides for her family, and even though she does have boys in her life that she might get romantically involved with, she does not depend on those boys to keep her safe or do everything for her.

Starring opposite Lawrence as Peeta, Hutcherson to me was the most impressive performer of the film. He channels a variety of emotions in a very convincing manner. For instance, when Peeta’s name is called at the lottery, his face was a mask of trepidation: mouth slightly open, eyes wide, lips trembling, feet dragging across the ground; a perfect portrayal of surprised horror. When Peeta is in the Capitol, however, he flashes smiles and cracks jokes for the cameras that are trained on the tributes in order to present a likeable personality for the crowd. By conveying these emotions so naturalistically, Hutcherson creates a multi-layered character you can root for.

The most entertaining scenes in the movie take place between two supporting characters: President Snow and Seneca Crane (Wes Bentley), who is the head Gamemaker in charge of operating the Hunger Games. These scenes take place in Snow’s rose garden, a place Crane visits when things happening in the arena aren’t to Snow’s liking. Sutherland is so great here. As he snips petals off of hand picked roses, he carefully asks Crane what he plans to do next. Sutherland’s voice almost sounds casual, but you can just barely hear some malice seeping through. Bentley, whose uniquely shaved beard should go down as one of the most memorable in movie history, replies to Sutherland’s queries with a good mix of cockiness and uncertainty. When Sutherland says to Bentley, “I like you. Be careful,” you can sense the hidden threat behind the words, and the force of that warning is awesome.

While the acting is stellar, the camerawork and editing are not. In the film’s first few minutes, when the camera showed different parts of District 12, I thought, “Oh, no. Not again. Yet another movie with an overly shaky camera.” The camera would focus on an old man eating scraps, needlessly shake up and down for a few seconds, and then cut to another shaky scene for a few seconds. This technique was implemented at various moments throughout the film, perhaps most annoyingly in the first fight scene in the arena.

I’m guessing that director Gary Ross used the shaky camera effect to give the film a “real feel.” Or maybe he did it in fight scenes so the camera could never focus on the gory mayhem (Ross did have to ensure that everything would stay within the boundaries of a PG-13 rating). Whatever his reasons, Ross’s vibrating cameras and the editing team’s (consisting of Christopher S. Capp, Stephen Mirrione, and Juliette Welfling) feverish cuts are still distracting, frustrating cheap thrills that do not belong in a movie. Please, keep the camera on something long enough so we can enjoy or cringe at what’s onscreen. Project X (2012) had better camerawork than this, and that film was all from the point of view of a handheld camera at a hysterical high school beer bust.

The screenplay, penned by Gary Ross, Suzanne Collins, and Billy Ray, is rushed at times. With a running time of 2 hours and 22 minutes, I think the movie is long enough, but the time is not managed as well as it could have been. The main blunder was not devoting enough time in the arena. The alliances formed, the chases, the blood spilt: it all happens too fast. A slower build-up to the climax (which itself is rather flat and short) would have made watching the unforgiving game of survival even more suspenseful.

I give The Hunger Games four out of five stars, a B+.

The Hunger Games is rated PG-13, has a running time of 2 hours and 22 minutes, and was released to theaters across the United States on March 23, 2012.