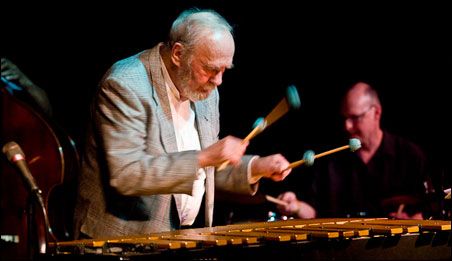 It’s not so much about the rhythm as the cause.

Celebrated Twin Cities percussionist Marv Dahlgren is calling on drummers far and wide to pick up their sticks at 2 p.m. Saturday to communicate a sobering fact: there are at least 925 million starving and malnourished people in the world.

In this state, about 10.8 percent of the population falls at or below the poverty line with hunger numbers here doubling over the last five years.

“We’re trying to raise awareness,” says Dahlgren, well known as principal percussionist for the Minnesota Orchestra for 48 years before his retirement a few years back. “I just sit at the phone every day and call drummers.”

At least 5,000 drummers from here, around the United States and from other countries as well will join in.

Unlike so many others who saw news of widespread famine and crop failure in Africa back in August, Dahlgren took up hunger as his cause, enlisting drummer friends including the notable David Stanoch, who has played with some of the best musicians around the world.

“I’m concerned that the world is not paying enough attention,” Dahlgren says, 87 years old and still teaching music at McNally Smith College of Music in St. Paul and at Augsburg College in Minneapolis. Stanoch also teaches at McNally Smith.

“I believe those of us who live in the richest nation on earth owe it to the starving children of the world to help them survive the ravages of famine. I want to keep beating the drum to make sure we don’t forget about the millions of children who are losing their lives every day to starvation,” says Dahlgren, whose drumming days began as a preschooler when his mother gave him a pair of sticks and a wooden bread board to play with.

His efforts led to the organization of The Global Drummers Alliance for Hunger Relief and include drummer Dave Schmalenberger and a cadre of other folks communicating the idea via the Internet and social media.

“We are not collecting money,” Stanoch stresses, though urging people to donate through established and reliable organizations such as UNICEF and Feeding America.

As for the drums?

Says Stanoch: “We are using the drums just as they were used ages ago in Africa: to send a message. People are starving. Right now. We believe that if more people understand that, more people will help to turn the tide.”

It works like this. Locally, drummers are welcome to gather at McNally Smith College of Music in downtown St. Paul at 1 p.m. for what they’re calling a Hunger Beat Down.

Dahlgren says he doesn’t know if 10 people or 50 people will show up.

There will be a little music, then, come 2 p.m. Central Time, Jan. 14, drummers will pick up their sticks and play “Three Camps,” a tune that replicates the kind of drumming used at army camps during the Civil War, when the role of drums woke soldiers and called them to meals.

Professional percussionists, educators, students and others will gather in schools, music stores and other private and public locations to play and participate via the Internet with a live stream here.The tempo is 120, Dahlgren says.

Stanoch praises Dahlgren, whom he has known since his junior high days when he would hang out Saturdays at Dahlgren’s downtown Minneapolis drum shop, which used to be located on 10th Street between Nicollet and Marquette, for helping make something good happen.