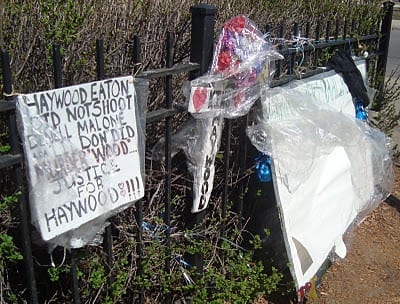 Earlier this week, I was talking with some employees at businesses in the Hawthorn (sic) Crossings strip mall. One concern that got brought up was the memorial for Haywood Eaton on the corner of Broadway and Bryant.

The sun has faded much of the lettering away. The balloons have long since deflated. Many of the businesses don’t want this on the property anymore, and their customers have said so too. Calls to the property owner, Sherman Associates, have gone unanswered.

People have said they wouldn’t even mind taking down this memorial themselves, except for two things…

…first, a level of respect for the deceased and his loved ones, and second, the nature of Eaton’s death. Like too many of our youth, he was senselessly killed in a tit-for-tat argument. Folks are rightly concerned that if the wrong person is offended by their taking down the memorial, then such action could spur more violence directed either at an individual or business in the area.

Personally, I think this makeshift memorial has long outlasted its usefulness in its current form. This isn’t to say that no such memorial to Eaton should ever be placed here, and I freely admit that I have no comparison to the depths of grief that Eaton’s loved ones must still be experiencing. But something that looks like this no longer pays respects to Haywood nor does it help the community. So what to do?

Ideally, the family and other loved ones of Haywood Eaton would remove these items on their own. That way if anything has sentimental value to someone, it would not be taken down and disposed of by anyone else. And then nobody would accuse people of disrespecting anyone’s memory. The family could even contact Sherman Associates to see what kind of more subtle memorial the property owner might be willing to allow.

If that doesn’t happen, then either the property owner or the city should remove these items, and soon. If the family and friends of Eaton, and those who placed these items here initially, don’t clean things up, then somebody’s got to be the bad guy.

How long do we allow such memorials to stay up? Who takes care of them? And most importantly, what do we do as a community so that these don’t even need to go up in the first place?