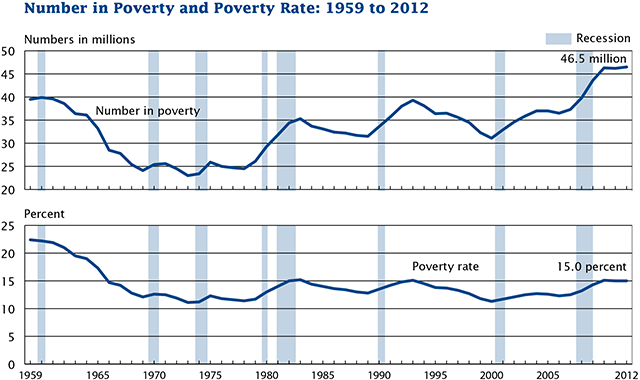 Note: The data points are placed at the midpoints of the respective years.

In case you missed it, “The Mismeaure of Poverty,” an op-ed piece run in the New York Times recently, is a must-read given these congressional times and the Census Bureau’s official report that poverty in the United States remains at about 15 percent.

Writer Sheldon H. Danziger makes a case that without the country’s anti-poverty measures, life would be significantly worse for those on the lowest rung of the economic ladder.

“We have spent $15 trillion from the federal government fighting poverty, and look at where we are, the highest poverty rates in a generation, 15 percent of Americans in poverty.’’

(The Census Bureau’s data shows Minnesota is doing better than most of the nation. Our state’s poverty rate declined from 11.9 percent in 2011 to 11.4 percent last year, meaning 23,000 fewer people are now counted as poor. Only two states showed a decline.)

Argues Danziger: “But this position is wrong, for two reasons. The first is that the official measure is misleading — it measures only cash income, and it does not count benefits from many programs that help the poor. If they were counted, the rate would be closer to 11 percent.’’

Danziger is also a co-editor of “Legacies of the War on Poverty,’’ which harkens back to anti-poverty policies of Lyndon Johnson’s administration and which helps make a case presented by poverty researchers that “poverty and racial discrimination would likely have been much greater today if the War on Poverty had not launched.” The poverty rate then was historically low at 11.1 percent.

Continuing to present evidence for his point of view, Danziger uses, for example, the benefits of the Supplemental Nutrition Assistance Program (SNAP), also known as food stamps, though stamps were long ago replaced by electronic benefits cards.

“A dollar of SNAP subsidies spent on food frees up a dollar for low-income families to spend on rent, utilities or other needs,’’ Danziger says. And that food translates into better health, higher educational achievement and greater earnings for children and adults, he says.

He cites another example. Social Security benefits — which are included in the government’s official measure of poverty — help keep the elderly poverty rate at less than 9 percent, he says.

In contrast, without Social Security payouts, the elderly poverty rate would be about 44 percent, he says.

So, why does the national poverty rate continue high?

Danziger blames in part income inequality, meaning that though the 2012 economy grew by 2.8 percent, and corporate profits rose, “the earning of full-time workers, median household income and the poverty rate barely changed.’’

More benefits from growth must reach the poor, he says. That’s accomplished by recognizing the effectiveness of anti-poverty policies and expanding on those efforts as well as increasing the minimum wage, he maintains.

Danziger says new numbers to be released by the Census Bureau in October do take into account the benefits of programs for low-income families, though those numbers are sometimes overlooked by the public and the press.