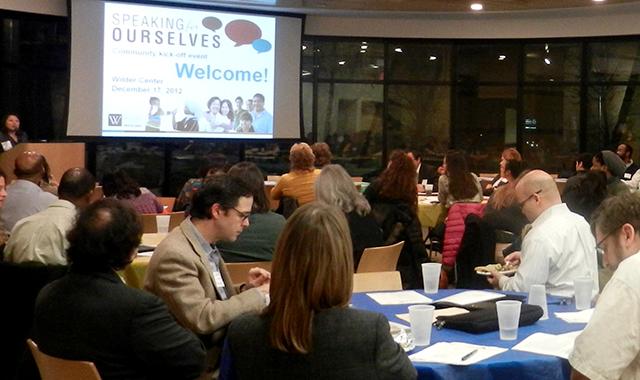 Is there a kind of caste system among the foreign-born in Minnesota where the undocumented are treated as outcasts? What about incidence of domestic violence, access to medical care and food, unemployment and sex trafficking among the state’s immigrant and refugee populations?

These issues and others worthy of study surfaced this week when Wilder Foundation gathered together about 90 people, those who work with and live in these communities, to talk about just how well the state’s fastest growing immigrant and refugee groups are faring from day to day.

The changing face of Minnesota, especially the Twin Cities, is a well-known story, though our state is less diverse than many. Latest data reported in Minnesota Compass shows about 380,000 people or 6.9 percent of the Minnesotans are foreign-born.

Now Wilder Research, at the direction of the Wilder Foundation, is kicking off a deeper study of Hennepin and Ramsey counties’ refugee and immigrant populations: their assets, greatest needs and the challenges to accessing services.

“We are trying to do a community assessment,’’ explains Nicole MartinRogers, the project manager, about “Speaking For Ourselves.” In its earliest stages, Wilder officials are involving the community as they consider which immigrant populations to study, as well as what questions to ask, and how to reach these populations.

Among those groups being considered for study are Latino, Cambodian, Hmong, Vietnamese, Karen, Somali and Oromo.

Documenting current conditions is a first step toward working to capitalize on the communities’ strengths and meet their needs, MartinRogers says.

By calling the meeting, researchers hope to involve people from a wide spectrum of minority communities, including Latinos.

Conveying the perspective of members of the grassroots group Asamblea de derechos civiles was co-founder Pablo Tapia, who carries a message of “liberation” for undocumented workers and the establishment of a path toward legal citizenship.

In a small group discussion, Tapia described how undocumented persons in this country are “not only discriminated against but also taken advantage of,’’ being paid lower wages and “working under close to slavery conditions.’’ The Wilder survey, he says, should include questions that reveal that class division and discrimination.

It’s not the first time Wilder researchers have surveyed the state’s newer residents. Their 2000 “Speaking for Themselves” study touched on the state’s immigration history, pointing out that 28.9 percent of the population in 1900 fit that description while only 4.6 percent in the state did in 1990. The research went on to focus on Hispanic, Hmong, Russian and Somali groups.

That survey, suggested by the St. Paul Pioneer Press and funded by the Knight Ridder Foundation, included: “… reasons for leaving home, reasons for coming to the United States and Minnesota, English language ability, treatment by Americans, views about cultural identity and Americanization, children and schools, religious identification, types of employment, stress factors, and sources of news and information.”

More than a decade later the foreign-born population across the state is growing steadily, but remains in the single digits. Ramsey County boasts 13.4 percent of its residents are foreign born, while Hennepin County trails at 12.8 percent.

Twelve years after the first study, a second study entitled “Speaking For Ourselves” seems to reflect inclusion and the majority community growing accustomed to its foreign-born residents.

Data collection methods have changed as well. In 2000, interviewers called land-line telephones in neighborhoods known to house foreign-born populations. This time, because of the prevalence of cell-phone use, researchers can’t reliably use that method. They talk of using a referral method instead, where one person interviewed suggests another of the same background but a different family to be interviewed.

Wilder researchers are also putting together a 25-person, culturally responsive and multi-lingual advisory board, accepting nominations for those positions on their website until Jan. 11.

Study results are expected in fall 2013.