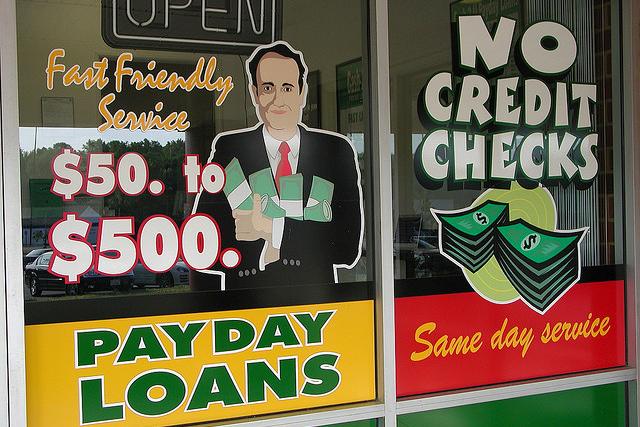 Bills being considered at the Legislature include such changes as capping payday loans per borrower to four a year, requiring lenders to check on a borrower’s ability to repay the loan before it is issued and closing a legal loophole that allows high interest rates. (CC/Flickr/Taber Andrew Bain)

Near the top of anti-poverty groups’ concerns this legislative session are the borrowing problems of people like hard-working Renee Bergeron, a mom of four who dug herself into a hole of debt in part because of a controversial loan practice that is currently legal in Minnesota.

Considered by some a debt trap and by others a financial service for the neediest, the so-called “payday lending” practice allows people to take out short-term, small loans due in full on their next pay day.

Some few, of course, are able to pay back loans with interest on payday. For them, the service is a convenience.

For too many others, however, the loan picture is bleak, more like Bergeron’s experience.

What it meant for Bergeron was a debt cycle that started with borrowing $150 in 2005 to buy Christmas gifts for her children but has ended up costing her about $4,000.

Borrowing of this type, which is banned in 15 states, about doubled in here during the Great Recession, reaching 350,000 loans in 2011 according to the Minnesota Department of Commerce.

Now a payday reform bill has passed through a state House committee and is headed toward the main body. A Senate committee hearing on the proposed legislation is set for Wednesday, this week.

“Our biggest problem with it is it acts as a debt trap,’’ explained Brian Rusche, executive director of the Joint Religious Legislative Coalition and a leader in the Minnesotans for Fair Lending campaign to legally rein in the practice. The effort has the support of 34 organizations, including Holy Trinity Lutheran Church in Minneapolis, a smaller parish that kick-started the effort. 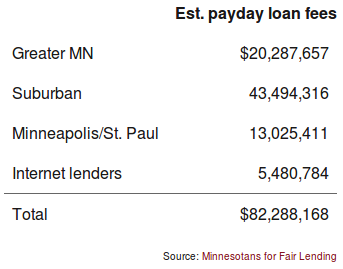 A report released this month by that group asserts that between 1999 and 2012 payday lenders from 84 storefront locations around the state “drained over $82 million in fees from financially stressed Minnesotans, primarily from suburban and Greater Minnesota communities” and that the “payday debt cycle is responsible for the significant majority” of the fees. You’ll see details here.

Those fees, the group says, are “dollars that Minnesotans cannot spend on typical household goods and services,’’ such as food and fuel, which purchases benefit the broader economy.

The way it works, Rusche told me, is that pay-day lenders ask loan applicants to show “some proof of an income stream,” usually a stub from a pay check, Social Security, disability or veteran check, though lenders don’t investigate whether a borrower realistically can repay the loan on time.

Further, loan applicants must provide their bank account number so the money can be electronically withdrawn on payday.

The automatic withdrawal makes it hard to meet existing bills and most people, Rusche said, “take out another one [loan] and another one and another” to cover living expenses. He said in Minnesota the average borrower takes out 10 such loans a year and called the service a “predatory product.’’

The average payday loan is $380, but because of the need to borrow again to meet other expenses, the average annual interest rate for a $380 loan is 273 percent, according to the Fair Lending group.

The problem for borrowers is what seems doable — paying off the loan — when they get paid isn’t realistic for many who are low income and may be dealing with substantial other problems. When the pay off comes due, they’re short on covering rent and other bills.

Bills being considered at the Legislature include such changes as capping payday loans per borrower to four a year, requiring lenders to check on a borrower’s ability to repay the loan before it is issued and closing a legal loophole that allows high interest rates.

For Bergeron, for instance, what lenders didn’t know was that the father of her children was first to put out his hand when her paycheck was deposited.

“Things wouldn’t have been so hard at that time if their dad had worked. But he was running the streets bleeding us dry. Which is why I was short for Christmas…He was with [us] every payday and demanding. So during the week I would go get a new loan so that I would have money to take of some things for the kids and I,’’ Bergeron told me.

Long story short, though her paycheck seemed large enough to cover the loan, in reality it wasn’t and she like other borrowers applied for another loan to pay off the former loan. She says she’d saw the same people all over town doing what she was doing.

“I didn’t realize what was going on” for about nine months, Bergeron said. Then, she saw that about $600 in interest and fees was coming out of every paycheck from the health services company she works for.

In 2006 she contacted a social service provider in Duluth for financial counseling and help getting her family into supportive housing. Now, though she’s still working to pay off about $3,000, she is advancing at her job and steers clear of the payday lending temptation. Her children’s father is out of the picture.

Now, instead of worrying her financial life is in a downward spiral, she attends her children’s basketball and soccer games and pulls out her camera to indulge a photography hobby.