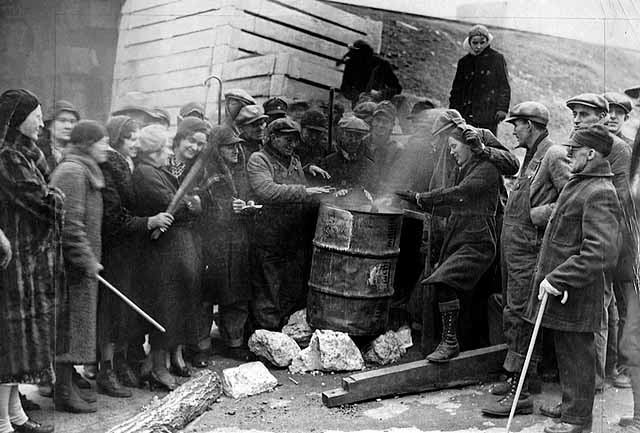 Last week thousands of fast food, retail, and other service sector workers initiated a series of protests across the country, including one day strikes, culminating on “Black Friday” with an estimated 1500 actions, including more than a dozen in Minnesota. In the Twin Cities, big box cleaning workers affiliated with CTUL, (Centro de Trabajadores Unidos en Lucha) struck and rallied outside Target headquarters on Nicollet Mall, while six hundred workers and supporters marched down Saint Paul’s University Avenue retail corridor, stopping at Target and Walmart. The Saint Paul actions disrupted traffic and ended with the arrests of twenty-six protestors who committed civil disobedience by sitting down at the intersection of Snelling and University Avenues.

Media commentators – and even some participants – have described these actions as unprecedented. But the actions have precedents in the formative struggles of the Minnesota labor movement of the 1930s, precedents which can help us to appreciate their significance.

In the lead-up to last week’s actions, low-wage workers were incited by news that a Walmart store in Ohio held a holiday canned food drive asking employees (“associates”) to donate for other employees. Management put bins in the locker rooms with signs reading “Please Donate Food Items Here, so Associates in Need Can Enjoy Thanksgiving Dinner.” A Walmart spokesperson poured oil on the public relations fire when he told the media: “This is part of the company’s culture to rally around associates and take care of them when they face extreme hardships.”

As this story circulated on the internet, it reminded workers and activists of recent revelations that McDonald’s instructed their workers to apply for government-provided food stamps, fuel assistance and Medicaid. Such stories added to their determination to take action. So, too, did the release of a report from the University of California at Berkeley’s Center for Labor Research and Education that 52 percent of all fast food workers rely on one or more public assistance programs.

These contemporary “cost-saving measures” echo the insults and provocations which launched the new labor movement in the 1930s. In the summer of 1933, after a series of wage cuts and reductions in hours, management at Austin, Minnesota’s Hormel Company introduced an “insurance” program which relied on a “voluntary” payroll deduction to fund a community food shelf. Foremen pressed workers to sign on for the deductions. Pro-union activists in the non-union plant decided to push a showdown over this issue.

One worker later told a scholar: “A fellow could not live on what we got, and they wanted money out of our paycheck. We were the poor people.”

When one worker in the Hog Kill yielded to a foreman’s intimidation, several activists stopped work and insisted the foreman tear up the card before they would return to the slaughter. Without fresh carcasses the entire plant would come to a halt. The foreman tore up the card, and the activists put out a call for an after work meeting to organize a union. Hundreds attended and, influenced by the legacy of the Industrial Workers of the World, they chose to call their organization “The Independent Union of All Workers,” signaling their intent to expand their organization beyond the Hormel workforce itself. The IUAW’s structure, membership, ideology, and dynamics were radically different from those of the craft unions which had long made up the American Federation of Labor, unions which were, by the 1930s, mere shadows of their former selves.

In the early years of the Depression, about six percent of the workforce belonged to unions and the unemployment rate was more than 25 percent. The mass production industries which had led the economic growth of the 1920s – steel, auto, meatpacking, rubber, electrical appliances – were completely non-union. The workforce in these industries included large cohorts of immigrant and African American workers, many of whom did not have access to full citizenship and the vote. These workers were economically and politically disenfranchised, and the causes of their poverty and powerlessness lay in the decades well before the Great Depression itself.

But in Austin and elsewhere in 1933-1934, management’s callousness provoked action. Inspired by the struggles undertaken by the unemployed who fought evictions in neighborhoods and demanded relief from all levels of government, and encouraged by the election of a new President, Franklin Delano Roosevelt, who said that if he was a working man, the first thing he would do was join a union, workers began to organize, devise new strategies, and create new kinds of unions.

In the Hormel plant, the new union took shape between July and October 1933. It developed a strong shop floor presence while it also reached out to other workers in Austin’s retail and service industries and farmers in surrounding Mower County. The IUAW pressed Jay Hormel, the CEO of the company, to sign a contract with them. By the second week in November they realized they were making no progress, and they launched a strike the evening of the 10th.

The IUAW’s structure was unconventional and their approach to a strike was completely unorthodox. Rather than march out of the plant and set up picket lines at the gates, the union’s members flooded into the plant and declared that they were in control. Union leaders informed Mr. Hormel that negotiations would take place in the plant, where more than one million dollars of pork and beef hung in coolers – coolers whose temperature was controlled by the striking workers. This was the country’s first sitdown strike. After only three days, Mr. Hormel agreed to the union’s demands not just for a formal contract but for a guaranteed annual wage, the direct sharing of productivity gains, and job security. This contract would last for fifty-two years.

The IUAW did not stop there. They set ambitious goals – to bring wall-to-wall unionism to the community of Austin and to organize the entire meatpacking industry in the Midwest. Within two years, they had unionized every significant department store, hotel, restaurant, and tavern in the city, as well as all public employees. In Austin’s Sears store, packinghouse workers had conducted a shop in. They filled carts and lined up at cash registers but refused to check out until management allowed register clerks to wear union buttons (and negotiate their own contract). They sent rank-and-file organizers to meatpacking plants – John Morrell, Wilson, Swift, Armour, Cudahy – and communities – Ottumwa, Albert Lea, Fairibault, Cedar Rapids, Sioux Falls, Sioux City, and South Saint Paul, and, by 1937, they had achieved unionization in most of them. It is not an overstatement to say that they laid the foundation for the modern labor movement.

And it had all started with management’s exploitation and disrespect.

Today’s fast food, retail, and service sector workers’ struggle seems not so different from this struggle of eighty years ago: on the one hand, workers who have been exploited, treated paternalistically, and dismissed as historical agents; on the other hand, workers creating new kinds of organizations (CTUL, OUR Walmart, the Greater Minnesota Workers’ Center in Saint Cloud, Centro Campesino in Owatonna and Austin, Working America, Minnesotans for a Fair Economy, Take Action Minnesota), undertaking new actions (one day strikes, marches, rallies, and protests with drums and dancers, civil disobedience), and reaching beyond the traditional limits and boundaries of unions and collective bargaining. Not only could these workers change their own terms of employment and their own lives, but they could give the labor movement a much needed boost. As I flowed with the University Avenue march last Friday, I thought of Austin in November 1933.

Maybe it’s not so unprecedented after all.