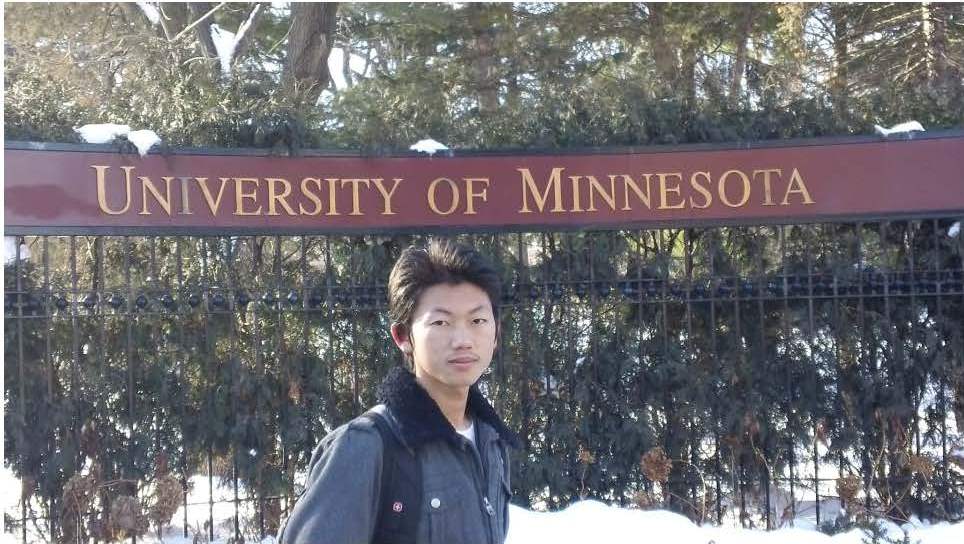 Hue Yang: from Hmong refugee to Hopkins High graduate to freshman at the University of Minnesota

North Minneapolis Hmong students going to Hopkins and Wayzata schools are asking governor Dayton to save the Choice Is Yours school bus transportation that they use to get to their schools.

The Hmong students asked for a short meeting with Governor Dayton, to tell him their life stories going from Hmong refugees to students in America, and to tell him about the great education they are getting in Hopkins and Wayzata schools.

The Hmong students are now writing, collecting, and sending hundreds of postcards to the governor’s mansion.  Many of the postcards have pictures of the Hmong students:  some in traditional Hmong clothing, some going to Hopkins and Wayzata school activities, some doing their homework.   Many of the postcards tell stories of their favorite classes and how the education they have gotten in Hopkins and Wayzata has helped them learn and succeed. 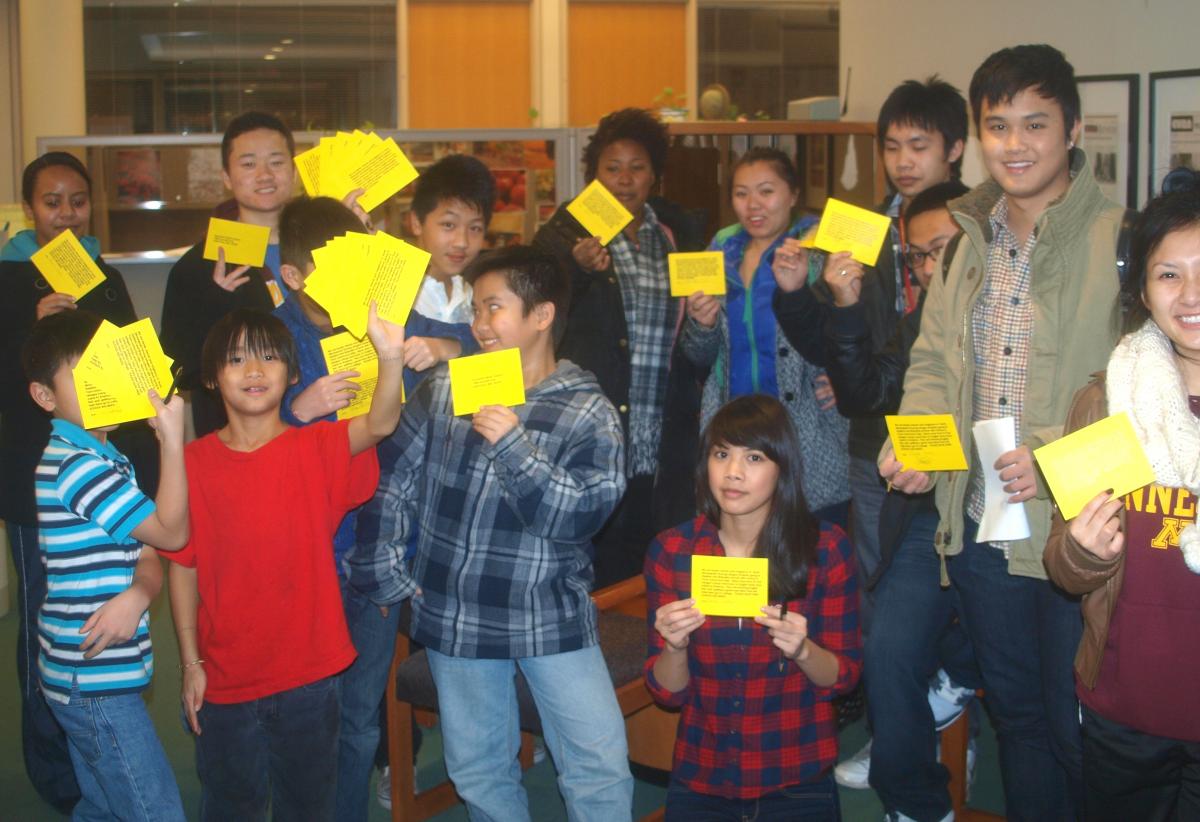 Hue Yang is one of the students who has sent a postcard to governor Dayton.  When he was 12 years old, his family moved from the Wat Tam Krabok refugee camp in Thailand to America and north Minneapolis.  Hue spoke no English.

Hue was the first of the North Minneapolis Hmong refugee students to enter the Hopkins school system.  At first it was very tough for Hue:  he was smaller than almost every other student, nobody else in the school spoke his language, and because he was just beginning to learn English, he often had difficulty understanding what was  being said in his classes.

But Hue  studied very hard.  His grades improved rapidly, and soon he was taking advanced placement courses.  Thanks to a lot of help from his teachers and counselors, Hue graduated from Hopkins high and today he is a freshman at the University of Minnesota.  Hue’s journey from scrawny Hmong refugee who knew no English to student at the University of Minnesota is a great American success story.

And Hue’s story is far from unique among the Hopkins and Wayzata Hmong students.  When Kaoxue Vang’s family arrived in North Minneapolis from Thailand, the only English word she knew was ‘love’.  When her parents heard about Hue’s educational experiences,  They decided to enroll their four oldest children in Hopkins schools.  Kaoxue says because she was still learning English she had to spend twice as much time as her classmates on her homework. But she succeeded through hard work and supportive and challenging teachers.  Kaoxue graduated from Hopkins High, and last year she also entered the University of Minnesota. On Sunday nights Kaoxue now tutors other Hopkins and Wayzata Hmong refugee children, helping them achieve academic success. Other Hmong refugee students are  also graduating from Hopkins high and going on to college 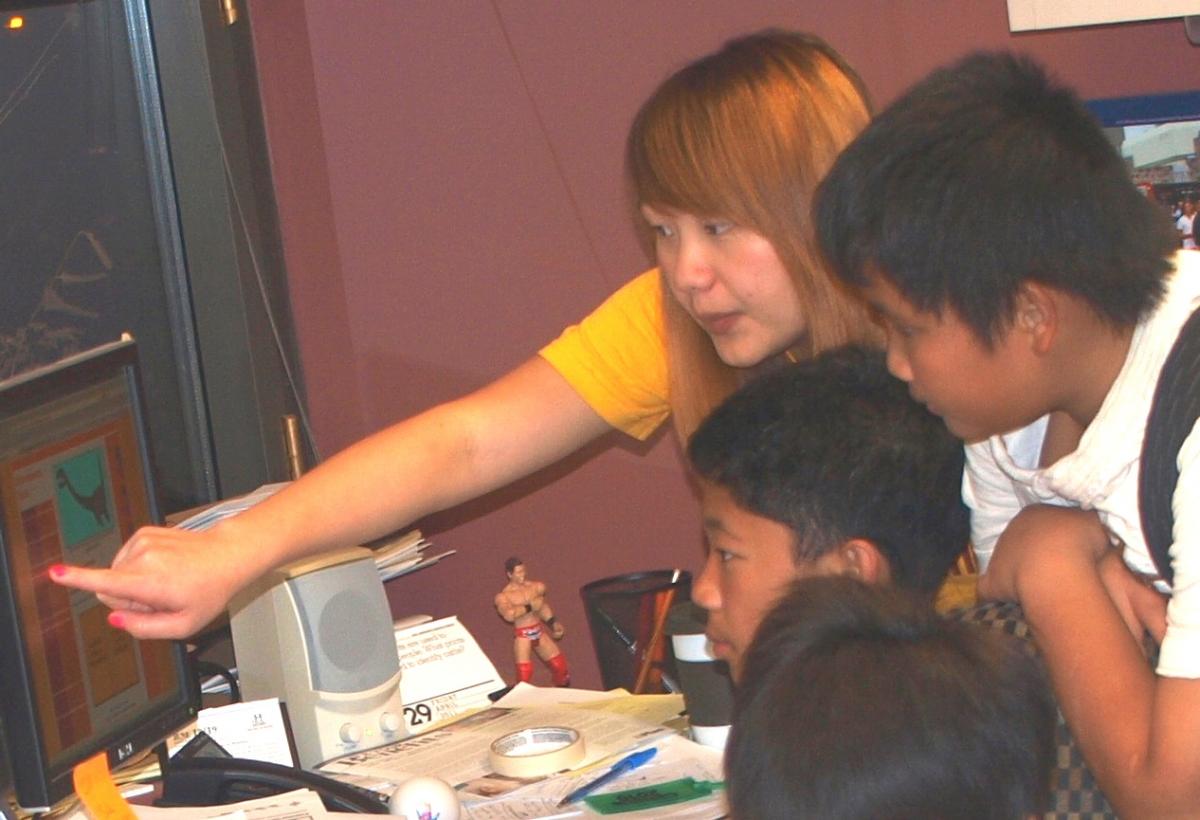 Kaoxue Vang Helps other Hmong refugee students with their homework

Most of the Hopkins Hmong students were born in the Wat Tham Krabok refugee camp in Thailand,  most came to the United States between 2004 and 2007, and almost none of the refugee Hmong students knew any English when they landed in America and came to north Minneapolis.

The Hmong students say they like going to Hopkins and Wayzata because they are surrounded by English speakers, take very challenging classes, and get lots of help from their teachers. They explain that their classes are smaller, they have more class offerings, and because  the other students in their classes study hard to go to college,  it also pushes the Hmong students to study harder. 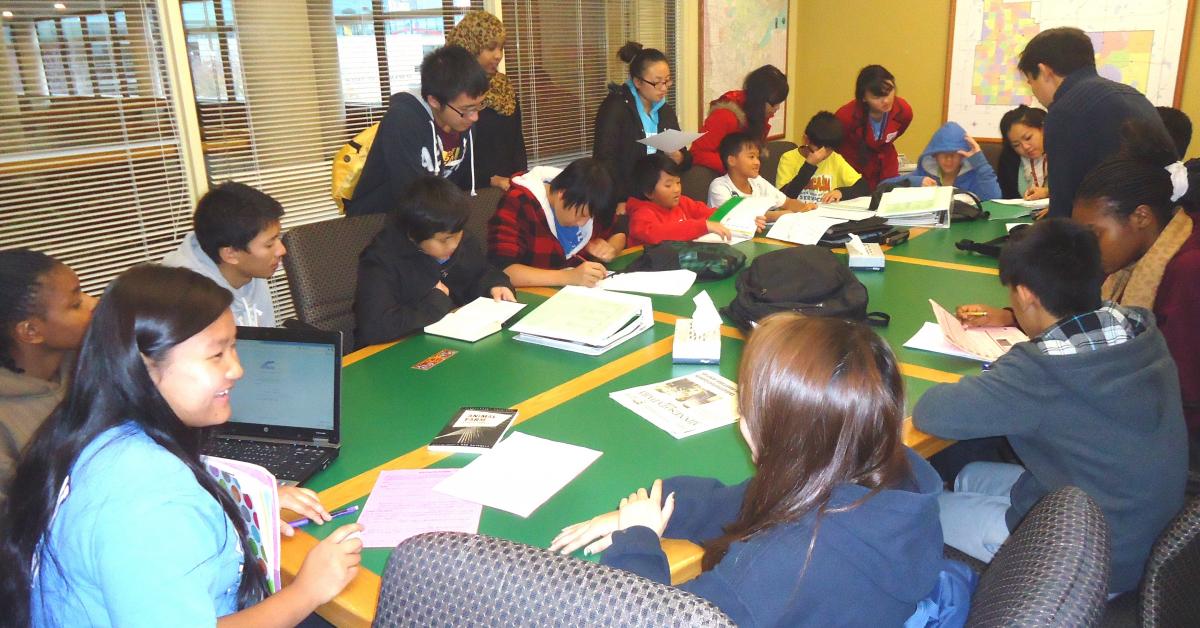 * Supportive, competent teachers go out of their way to help students during and after school
* Students are pushed hard in mainstream classes, and specialized staff  give additional help on the hardest courses such as history and science
* Their academic English continues to steadily improve.
* Students are thriving in science classes and  ELL classes
* Students value the abundance of academic activities, both during school and after school,  that are helping  their academic success.
* Achievement data shows they are making steady academic progress

In the 2011 Minnesota legislative session, the senate education committee voted to terminate Choice is Yours and to stop the school bus transportation. Scores of Hopkins and Wayzata Hmong students went in two waves to the state capitol.  They talked with dozens of legislators. The Hmong students succeeded in persuading legislators to back Choice is yours, and  Choice is Yours was reinstated in the final  budget agreement between the legislators and governor Dayton.  State senators Patricia Torres Ray and Terri Bonoff have worked very closely with the Hmong students. 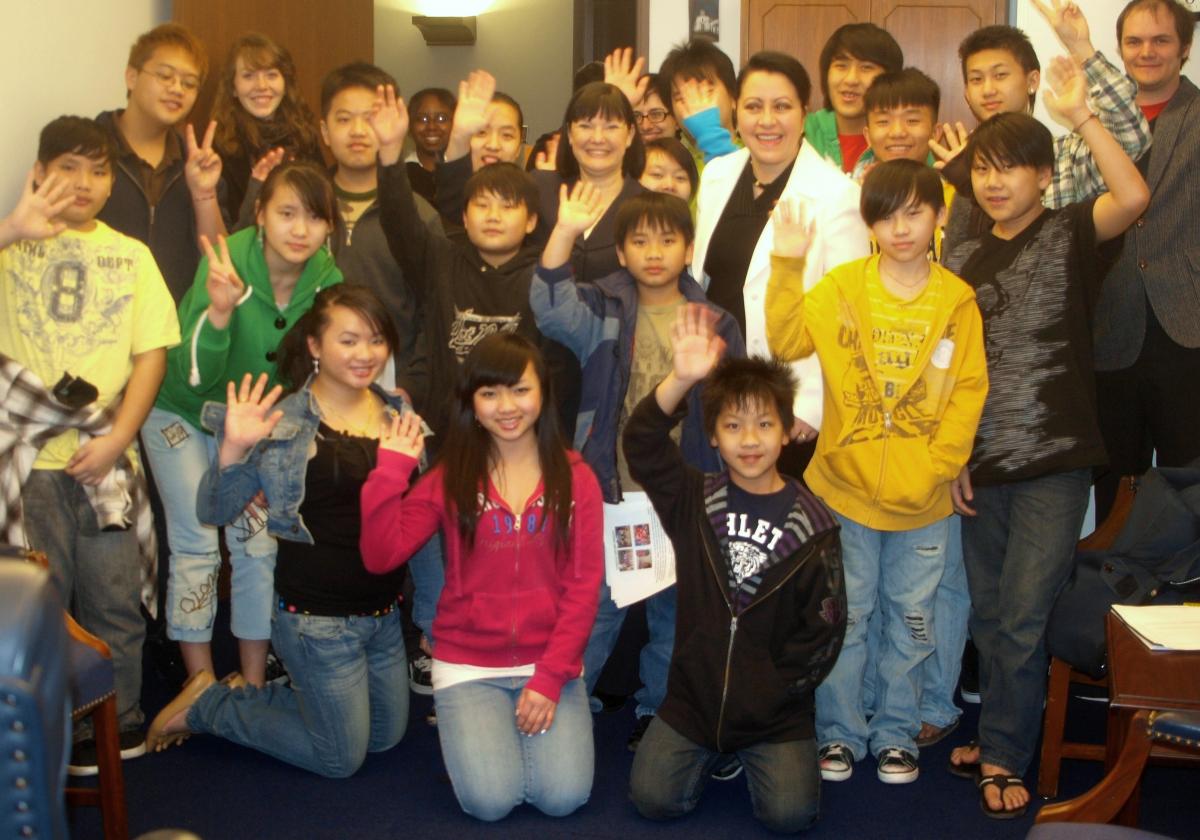 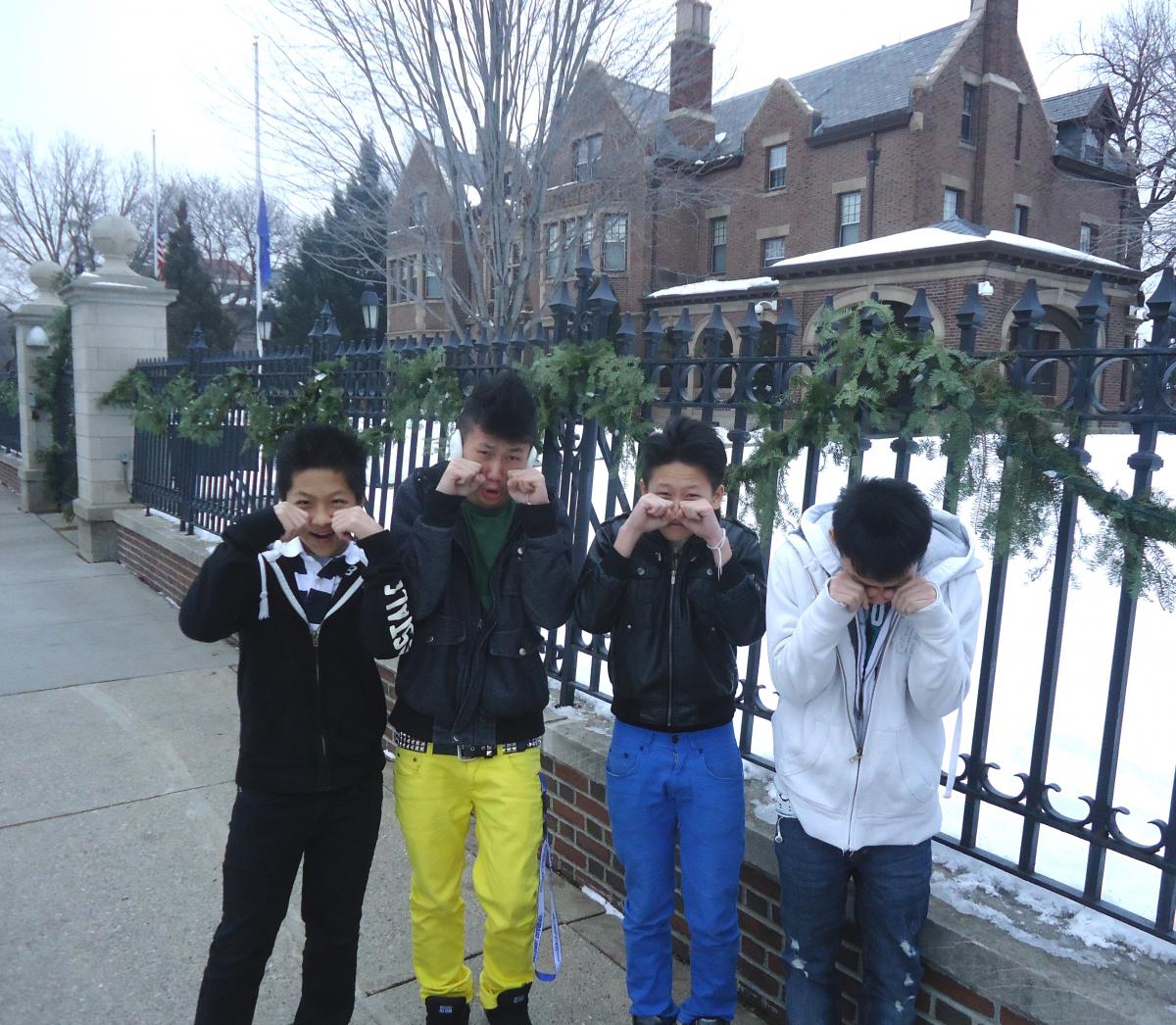 Sad Hopkins Hmong students In front of the Governor’s Mansion.  They still hope one day to meet their governor

Hmong students also hoped governor Dayton would  find their story interesting and educational:  hearing how  students in a few years have gone from destitute refugees knowing no English to university students might offer insights into how Minnesota and the nation can overcome the challenges of high dropout rates and low student performance. 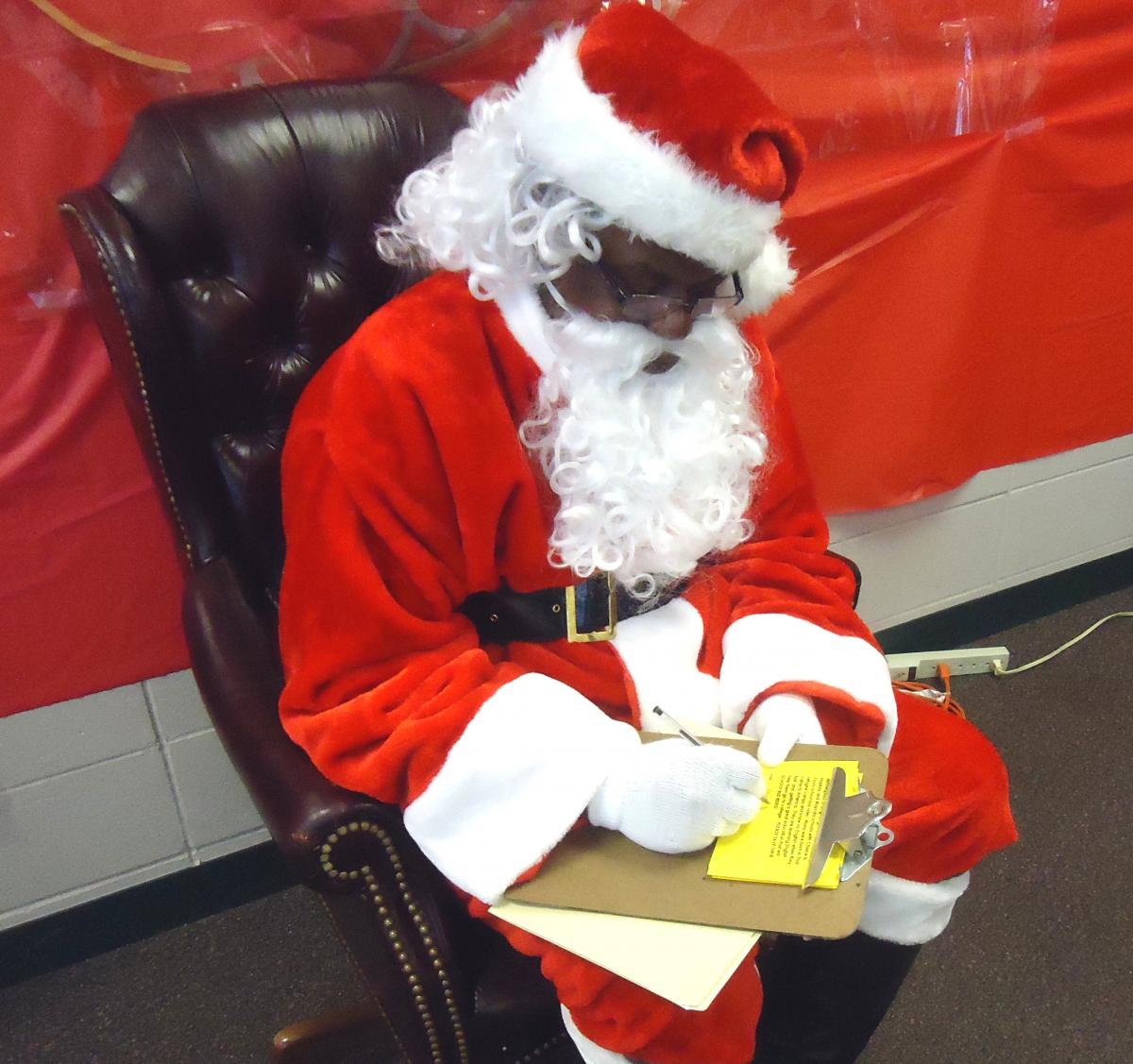 Even Santa Claus signs postcards to save Choice Is Yours school bus rides!

In the meantime, they hope the postcards have helped tell governor Dayton about their lives starting as  Hmong refugees and becoming  successful American students getting a great education in Hopkins and Wayzata schools.

And they hope that governor Dayton will help continue their educational success by supporting their Choice Is Yours bus transportation to Hopkins and Wayzata schools.

Here are some of the postcards that the Hopkins and Wayzata Hmong students have sent to governor Dayton. 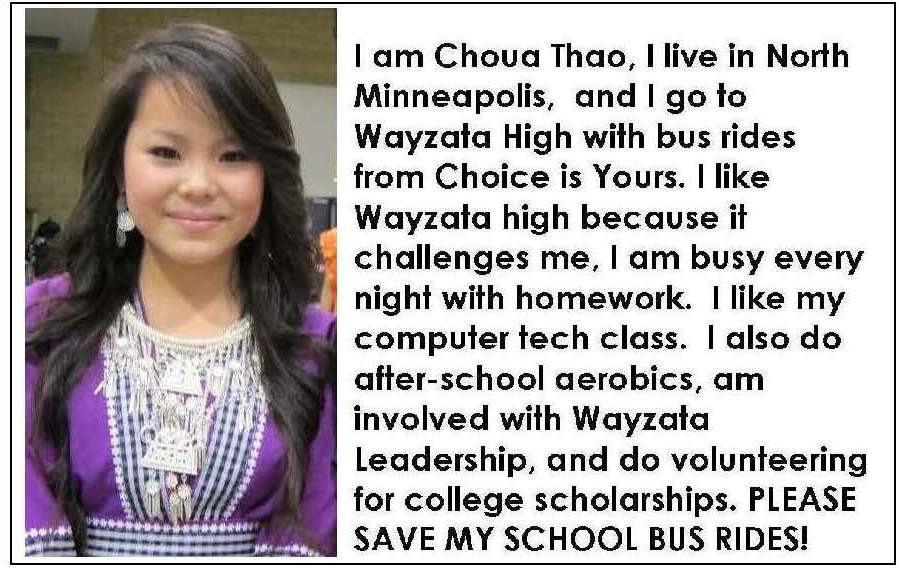 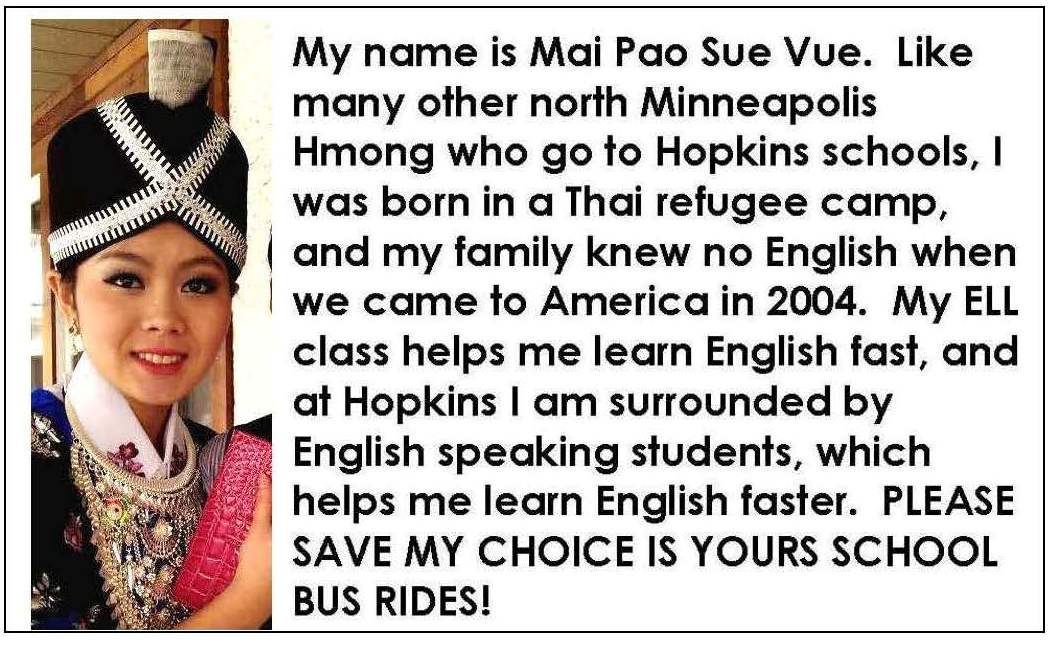 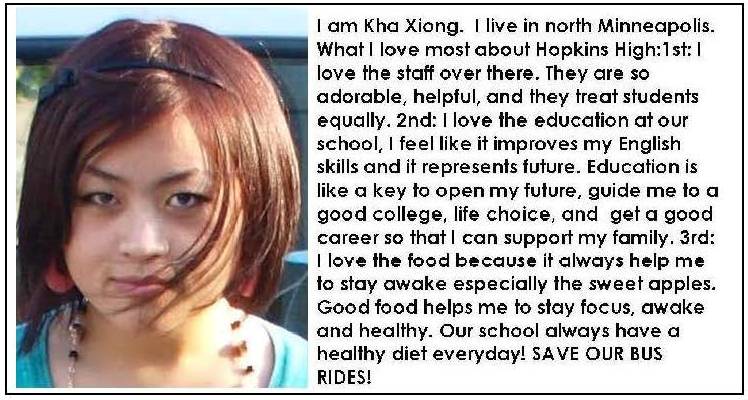 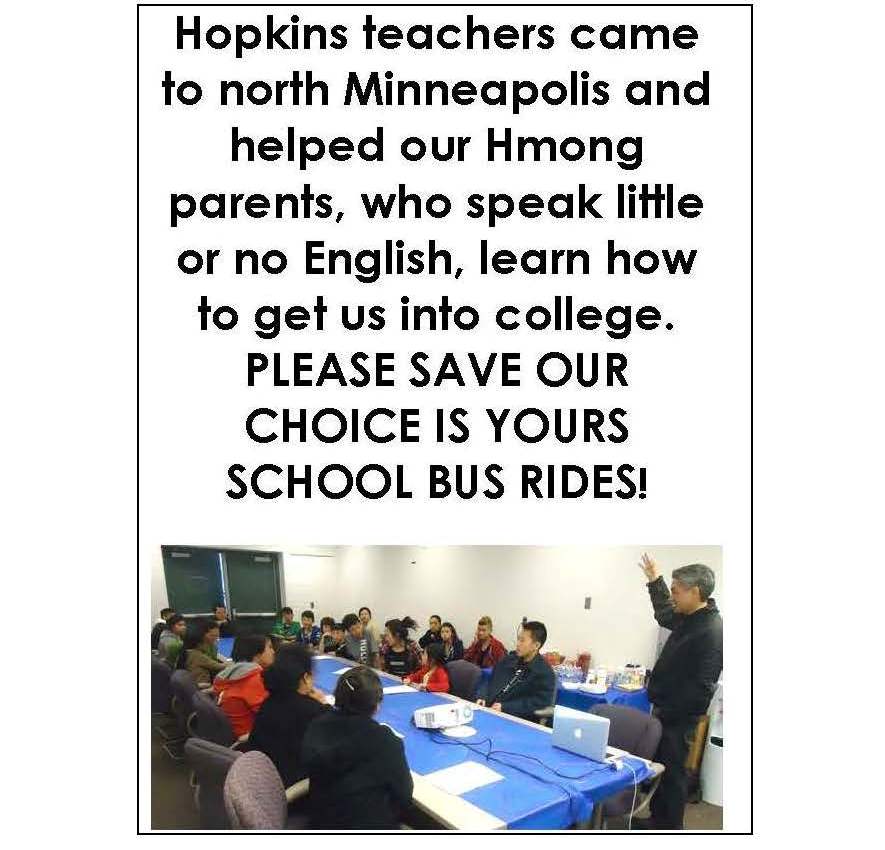 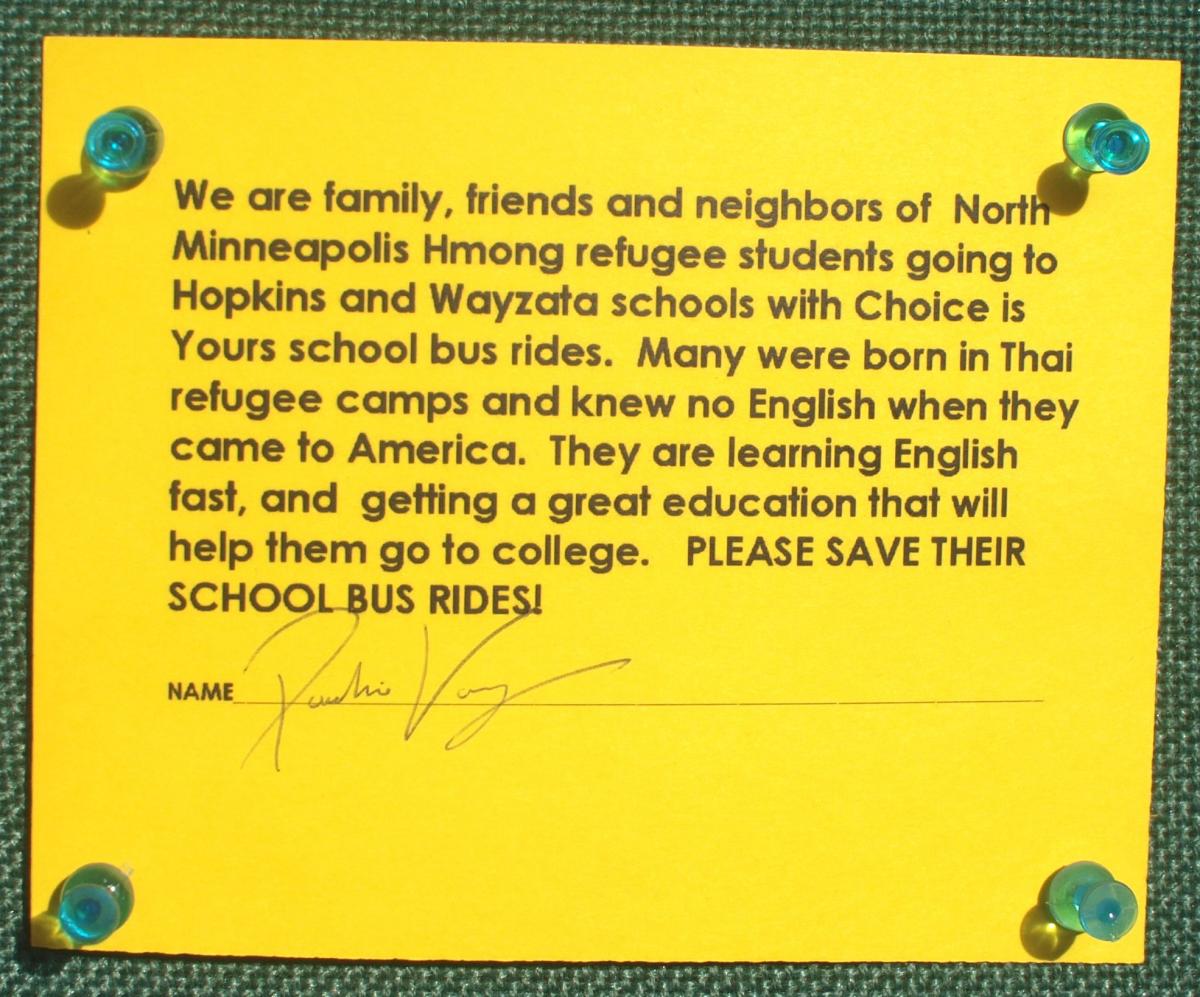 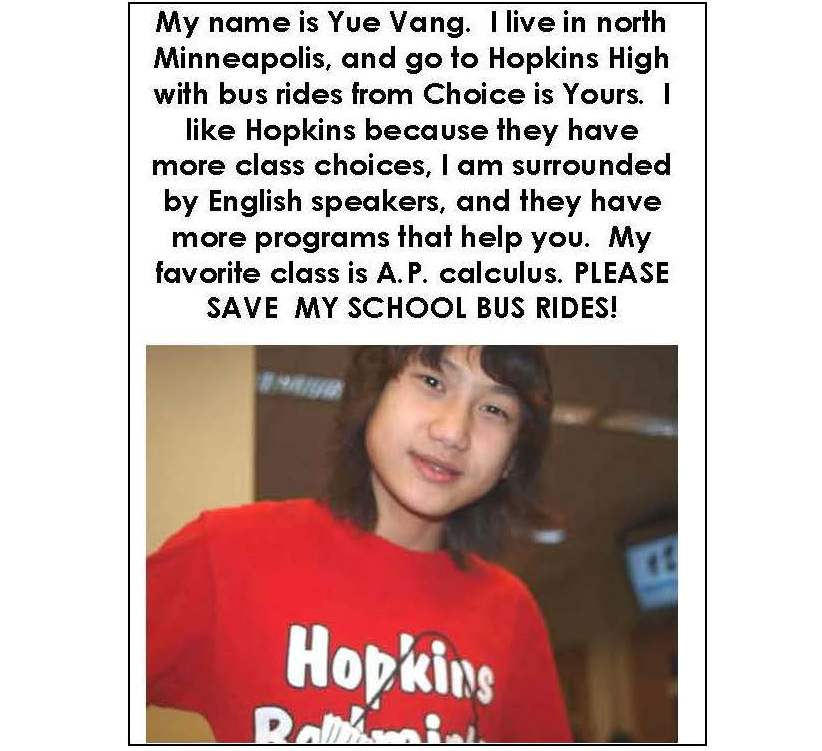 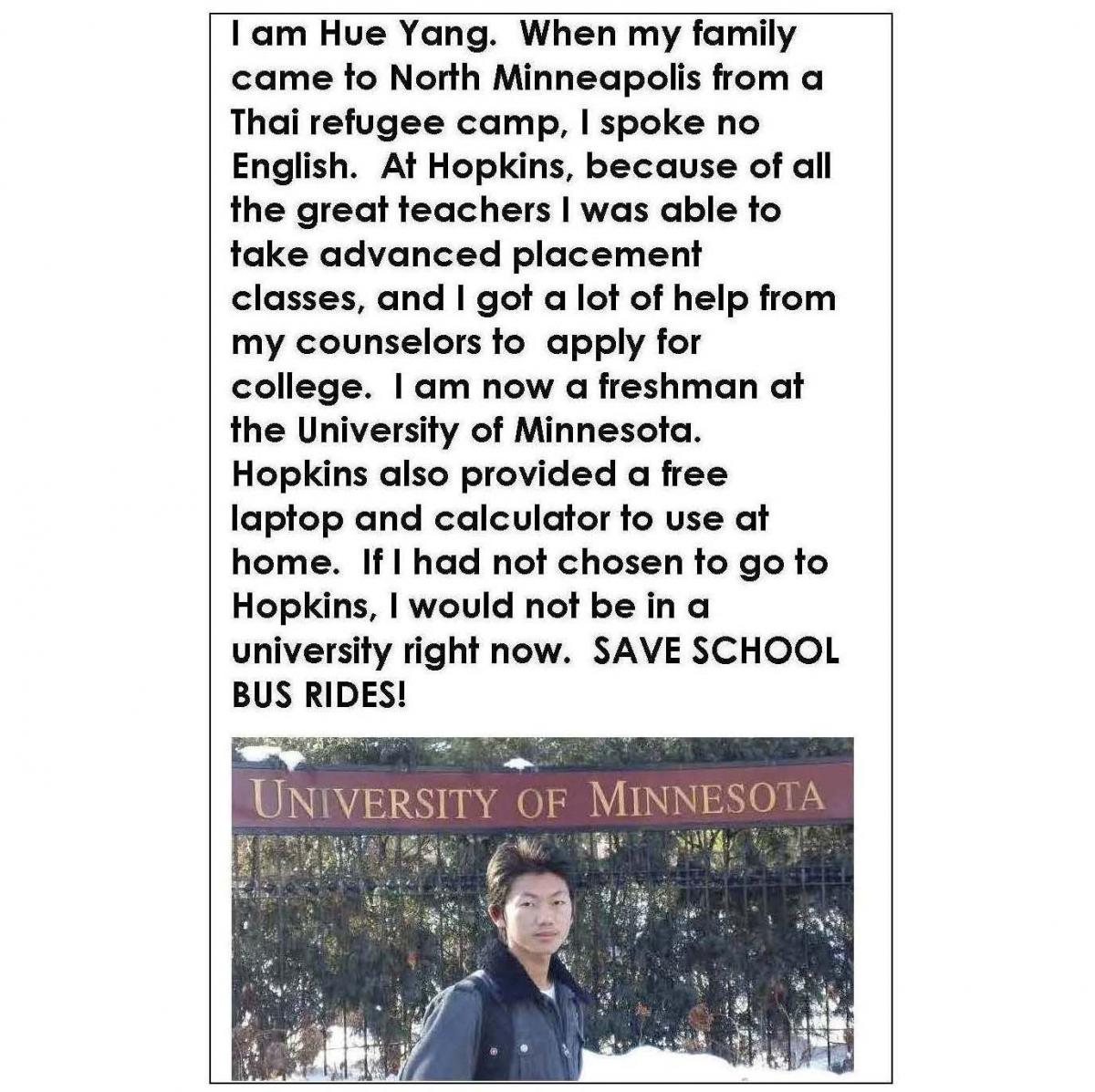 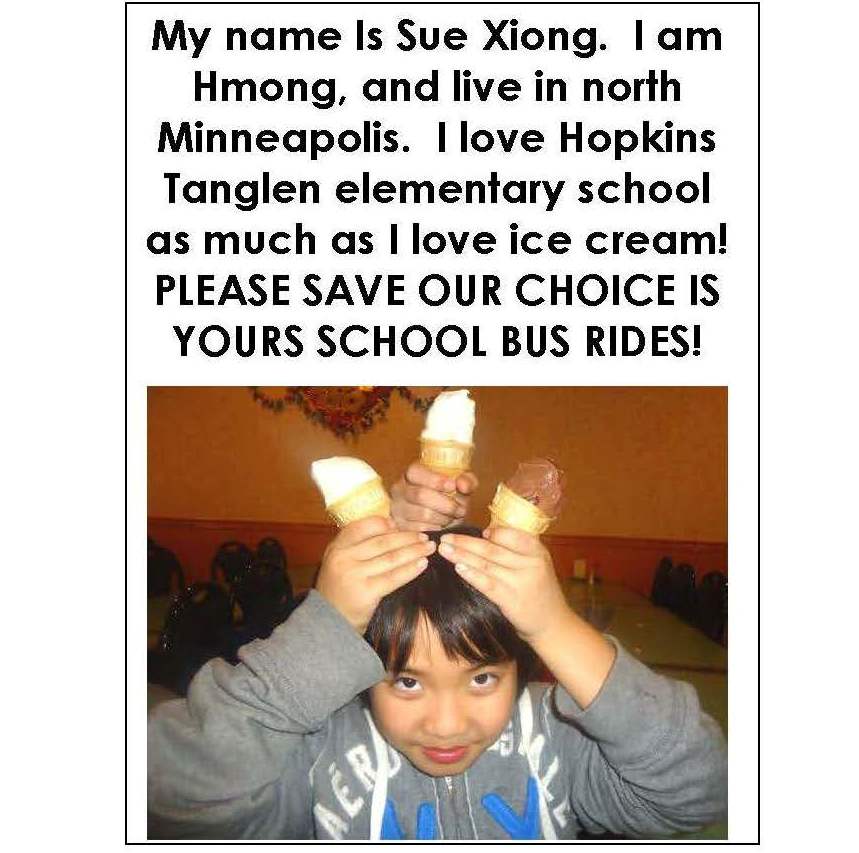 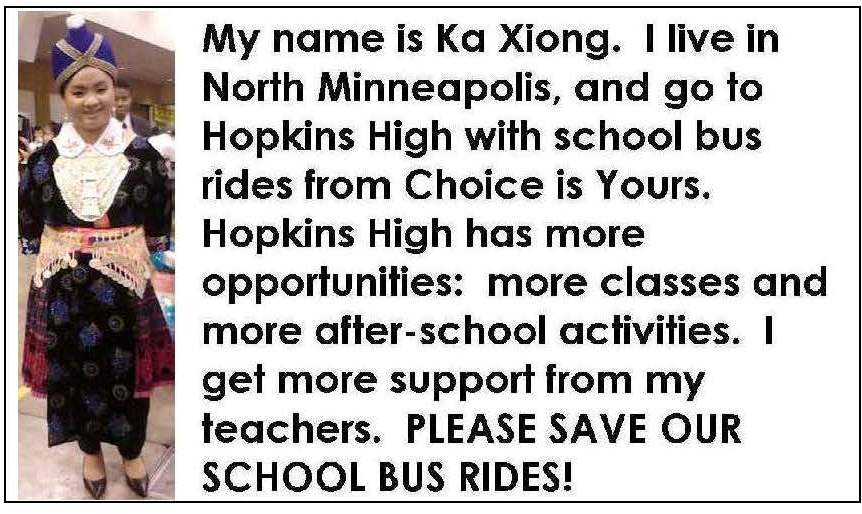