Since 2000, Homewood Studios, an artists’ workspace and gallery/meeting space in north Minneapolis, has served local artists and their neighbors in the belief that the visible presence of working artists contributes to the vitality, self-image, and coherence of community. 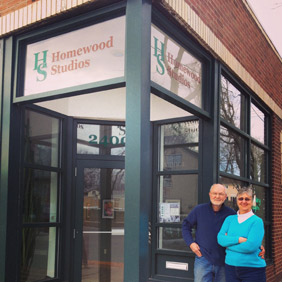 After a tour of the beautifully restored old building at the corner of Plymouth Avenue North, we sat down with George Roberts and Beverly Roberts, longtime residents of the Homewood neighborhood, to talk about the history and mission of Homewood Studios.

At right: George and Beverly Roberts outside of Homewood Studios at 2400 Plymouth Avenue N. (Photos by Shaina Brassard)

Shaina Brassard: How did you come to own Homewood Studios?

Beverly Roberts: This was boarded and vacant for more than 10 years. It was on our path of places that we go back and forth from. We tried for a while to get nonprofits to take a look at it; they weren’t interested but they said, “If you can get site control, then the community can do something.” George was still teaching, but ready to retire and had been talking about getting a studio of his own. So he and Shirley Jones, also an artist and teacher, began to talk about buying this building and turning it into studios and a gallery. 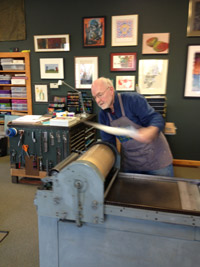 Left: George Roberts at work in his studio, Downstairs Press.

We watched for the price to go down and purchased it in March of 1998. We got grant money through NRRC (Northside Residents Redevelopment Council) and the city for the roof and the windows. So we sort of buttoned it up and then got the gallery in shape. Then we worked backwards, and it took a number of years to get the studios ready. The last studio, George’s, was finished in 2005.

George Roberts: Our mission says that we believe the visible presence of artists in the community contributes to the connectedness and vitality of the community, thus the big windows. We want people to see the art. And a lot of people do tell us they love driving by and seeing what the artists are doing. It’s much better than a boarded up building.

It’s always been a place for new or emerging Northside artists to have their first shows. We want the community to be able to see the art being made in their community, to show that art doesn’t happen someplace else, it happens right here – these are your neighbors.

We host a new show every three to four weeks. We don’t make any profit on the gallery or studios; we break even. The artists rent the gallery and we work together to get an audience to view and buy their work. Since we don’t charge a commission, artists aren’t forced to raise the prices of their art. It also allows the artists to have funds to take the next step with their art; if they sell $4,000 worth of art, they have $4,000 to live on and make more art.

BR: As a former teacher at North (Community) High (School), George in particular is interested in getting children interested in art and aware that art is a part of the neighborhood’s fabric.

GR: There’s a corner of our gallery facing the street that we now call Gallery 1x1xOne for one piece of art for one month by one artist under the age of 18. There’s no jury. Any child that brings a piece of art will get a chance to show it. We frame it and take their picture and make a big deal, sometimes even have a little family opening, so they leave here thinking, “I’m an artist,” which is what we want. We have one young artist, the granddaughter of our neighbor, and now when they are driving by the gallery she insists her grandmother pull over so she can see who the artist is this month. Art is on her route.

In addition to our arts activities we have musicians that meet here regularly. We have a tai chi class that happens on Saturdays. We had a quilting class for a while. In those instances, an individual has come and said, “I have an idea for a class. Can we work something out?”

There’s a musician that lives down the street, a guy that in his retirement is learning to play the flute. He has come down here some Tuesday evenings when the gallery is open and just played the flute for whoever comes in.

BR: I think that’s a good thing to mention. What we hope is that people think of Homewood Studios not just as a gallery space, but as a community space for them.

The next showing at Homewood Studios is Larry Risser: The Park: Soul of the City, which runs from May 31- June 22.