They wash up in gas station bathrooms, eat food unheated straight from cans and sleep in the back of a panel truck.

Such is the startling life of a homeless Central Florida family, a jobless carpenter-dad and his two teenage children, as told on CBS’s “60 Minutes” on Sunday.

Brother and sister, 13 and 15, tell their story. Keeping up appearances, they study hard at school, participate in a community theater production, then trek “home” to a truck parked in a different, well-lit lot each night.

She is pragmatic. “It’s not really that much of an embarrassment. It’s only life. You do what you have to do,” says Aerial Metzger, a high school freshman. Listening to her, you know she’ll be one who’ll rise above her misfortune.

Exactly how many of Minnesota’s homeless are forced to take such extreme measures Liz Kuoppala , who heads up the Minnesota Coalition for the Homeless, doesn’t know. People don’t always share that information.

What she can tell you, however, is that family homelessness increased 19 percent between 2006 and 2009, that 40 percent of the homeless are children, and that some of them do go to bed in tents or cars because they have nowhere else. She’s met them, as have many others who work with the homeless or hand out emergency food supplies.

Sometimes the secret shows up in classrooms where kids begin the day disheveled and un-rested, according to Ryan Strack, homeless liaison for the North St. Paul-Maplewood-Oakdale school district. He knows three families in his district that lived out of their cars this year.

Further, Carol Zierman, coordinator of Heading Home Ramsey, and others working to house the homeless can tell you of this fall’s housing crisis, the fallout of the Great Recession, and what City of St. Paul/Ramsey County Homeless Advisory Board members called the “unprecedented level of demand for housing assistance” across Ramsey County.

In September, shelters there had to turn away 710 homeless children and adults because “there was no shelter for them, no back up at all,” Zierman says. 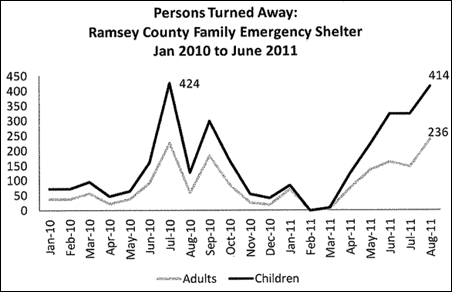 Other emergency housing providers for single adults and youths faced extreme shortages of space as well. For the first time in 30 years, Dorothy Day Center had to send away those seeking shelter.

Clearly, desperate times require serious measures. To help tell the story, Zierman and others recruited community television folks at CTV North Suburbs, who in little more than two weeks created pro-bono the seven-minute video “Without A Home, Where I Stay.” You’ll find it here.

Compelling and informative, the production opens with voices talking over one another, people seeking emergency shelter and transitional housing: a woman pleading, “I’m homeless and sleeping in my car;” a man admitting, “I lost a job.”

Then the cameras turn to the professionals, executives from the Listening House and Catholic Charities Minneapolis-St. Paul talking about an “explosion of need” and “dramatic increases in demand.”

Statistics such as these stretch across the screen: “2006 to 2010, the number of homeless students in Ramsey County almost doubled to 1,996;” only “1 of 4 families that seek emergency shelter are able to be served.”

Since the video was posted on YouTube earlier this month, funding from the City of St. Paul, the Ramsey County Board of Commissioners, area nonprofits and foundations has been found to secure 50 additional beds for single people and for 20 additional family beds, Zierman says, to get people indoors through the winter and cold spring months. Thirty more spaces for families are needed, she says, as well as 10 beds for young people on their own.

As the video concludes, professionals call for permanent housing, what they call cost-effective solutions to homelessness to replace the current expensive crisis measures like emergency housing.

As Kuoppala tells it: “We know how to house these folks. We just lack the political will.”