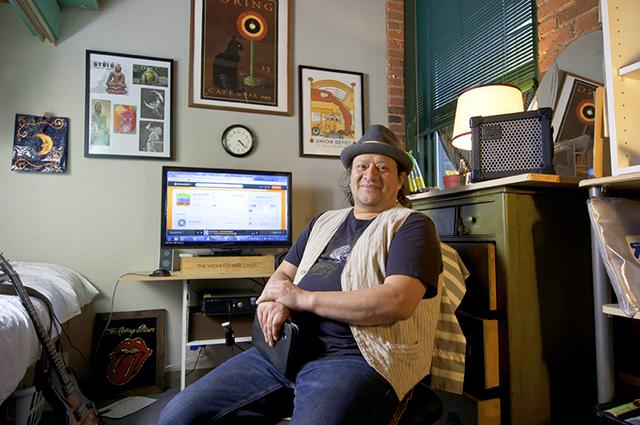 Lorenzo Vasquez: “They hand you the keys to your room; it’s like keys to a Rolls Royce.’’ (MinnPost photo by Bill Kelley)

Living in his car, sleeping on buses, hunkering down with friends, for at least 25 years Lorenzo Vasquez had no place to call his own.

Now at 61, he proudly unlocks the door to his very own place, a single room he’s outfitted with his own stuff.

For him, the room at American House on the edge of Mears Park in downtown St. Paul is not only the end to homelessness but also a springboard to a new life and a steady job as a hairdresser.

“They hand you the keys to your room; it’s like keys to a Rolls Royce,’’ he said.

For state officials, Vasquez is a symbol of success on a continuing path toward housing Minnesota’s homeless.

That’s a goal they see as more attainable since last month when the Minnesota Interagency Council on Homelessness — a team of representatives from 11 state agencies running the gamut from Corrections to Housing to Human Services, Transportation and Veterans Affairs — with Gov. Mark Dayton’s support announced their coordinated “Heading Home: Minnesota’s Plan to Prevent and End Homelessness.”

The effort isn’t “just about ending homelessness but changing the systems that have a role in preventing it,’’ explained Cathy ten Broeke, the state’s director to Prevent and End Homelessness. The problem is there are barriers to systems working together, she said.

Too often, ten Broeke said, there’s a “disconnect” between programs that would enable people to make stable lives. For instance, a person lands a job but needs child care to go to work and child-care financial assistance doesn’t kick in until two weeks after the employer expects the new hire to be on the job.

It’s that kind of “disconnect” that state agencies will be looking for and recommending administrative or legislative solutions for, ten Broeke said.

The plan has the goal of preventing and ending homelessness for families with children and for young adults on their own by 2020 and for veterans and people experiencing chronic homelessness by 2015.

Strategies to reach these goals extend beyond stable housing to include “decent paying” jobs and improved personal health.

Council co-chair Mary Tingerthal, who is also the state’s housing commissioner, praises the new plan. She says it builds on a successful, seven-year collaboration between the Minnesota Housing Finance Agency and businesses that last year met the goal of creating 4,000 such housing units. Yet she stresses the need for more funding.

Though her agency had asked the governor for $100 million in bonding to be used for affordable housing projects, Dayton Wednesday asked legislators for half that amount.

Still, Tingerthal said the request shows Dayton’s recognition of the need for affordable housing, accounts for 5 percent of his bonding bill and would “build, preserve and rehabilitate more than 2,000 housing units across the state.”

Also Wednesday, Homes for All, a coalition of groups advocating for the homeless, announced it has legislative sponsors for a bill requesting $100 million.

For Vasquez, who in December earned back a state license to cut and style hair and perform other cosmetology services, a home in American House is more than private space to call his own and communal space to cook, eat and bathe. It is also the source of financial and psychological support.

Vasquez says that at American House, which features 69 sleeping rooms and is owned by Beacon Interfaith Housing Collaborative, he has found hope. The nonprofit, supported by 50 religious congregations, owns properties across the Twin Cities that provide stable housing for more than 700 men, women and children and has plans for more such housing. Many sites, like American House, provide supportive services as well.

For Vasquez, hope came in the person Suzanne Jerrett, who works at American House, as well as a state jobs counselor who believed in him and mental-health professionals and others.

“I try to work on people’s strengths,’’ said Jerrett, downplaying Vasquez’ praise of her. She describes her job as providing services to persons who have had a mental-health diagnosis.

“People come down and talk with me about what it is they have going on, and if they don’t know the resources or how to get the resources, we discuss it and come up with a plan,’’ said Jerrett, who is employed by People Incorporated, which provides a spectrum of services to promote independence for people with mental illness. Funding for services and housing comes from Group Residential Housing, a state-financed program aimed at reducing and preventing homelessness for low-income adults.

Vasquez said he has had 30 years of therapy to work through a dysfunctional-family history and to deal with depression. He describes a troubled childhood, beginning with his birth to a 16-year-old mother and living in the old “West Side flats” in St. Paul in a house with no electricity or running water and dirt floors.

“I was pretty much passed around as a kid,’’ he said, describing how his mother left him to live with his grandfather and how he was afraid of his father.

Vasquez says he suffered heartache, anger and loss of self-confidence as well as learning problems in school. His mother came to reclaim him, but brought along an alcoholic stepfather, he said.

Though he had some college, he ran into road blocks. “I never was groomed to be an achiever. I didn’t have job ethics,’’ he said. Still, years ago he worked in hair salons before losing his cosmetology license.

Three years ago he came to American House where he was hooked up to a wide network of services and professional guidance, including the tuition money to return to cosmetology school and the fees to take the state licensing examination.

“Basically, I’m back in the fashion industry,’’ he said, suggesting he will look for a job cutting and styling hair or perhaps as a freelance makeup artist. Maybe, he said, he’ll have his own makeup line.