Sura Vue, MaiKa Lee and Soua Chang were part of a group of Patrick Henry High School students who met with Minneapolis Superintendent Bill Green and went to the school board to lobby for Henry’s new class, Hmong Literacy and Languages. (All photos by Debra Fisher Goldstein for TC Daily Planet, ©Debra Fisher Goldstein)

Neng Vang doesn’t know how to explain the words “scholarship” or “essay” to her non-English-speaking mother. The Patrick Henry High School senior says it’s hard to find the words to tell her mom why she is late coming home on the days she stays after school to get help with college and scholarship applications.

Vang’s mother, who was born in Laos, “understands basic stuff,” Vang says, but trying to explain certain American cultural concepts to her in the Hmong language doesn’t always work.

Despite being raised in homes where the spoken language is Hmong, Hmong teens say they don’t have the Hmong language skills they need to communicate well with their parents.

That’s one of the reasons a group of Henry High School students lobbied the Minneapolis School Board to allow a Hmong literacy course to be offered at their school. That class-Hmong Literacy and Languages-begins next week. The curriculum includes basic reading and writing skills as well as Hmong history and culture. So far, about 100 students have signed up for the three units of the class that will be offered every morning at the school, and not all of the students who signed up are Hmong. 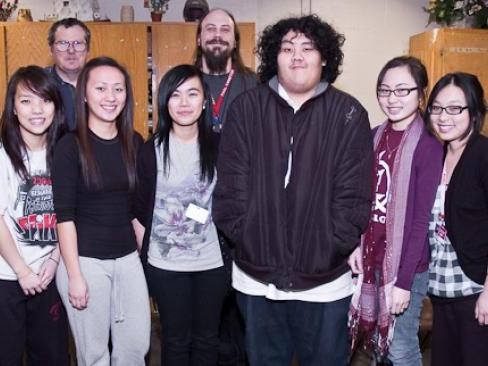 With the help of Jay Clark (back left) and Paul Compton (back center) these Henry High School students were able to convince the Minneapolis School Board that a Hmong language class was an asset for the school. They are, from left, Neng Vang, Pasee Moua, Ia Vang, Sura Vue, MaiKa Lee and Soua Chang. (Photo ©Debra Fisher Goldstein)

The work to bring the class to the school began last year when members of the school’s Asian Club brainstormed changes they would like to see at Patrick Henry. According to Jay Clark, director for the Minnesota Center for Neighborhood Organizing at the University of Minnesota who has been working with the club, number one on that list was “the major huge classes” at the school. Also on the list were getting volleyball at the school, dealing with the less-than-palatable school cafeteria food and a Hmong literacy class. The literacy class wasn’t as high on the list in the beginning, says Clark, but it didn’t take long before it was.

That day came when Clark took several Henry students to visit Como Park High School in Saint Paul to try some of its cafeteria food because they’d heard that Saint Paul Public Schools food service was trying to improve and diversify school lunch by offering ethnic dishes such as Chicken Suqaar and Chicken Curry with Basmati Rice. The day they visited, Hmong Beef Fried Rice was on the menu.

“We agreed: The food was much better,” says Clark. After they sampled the food, the group toured the school. “We walked by one classroom where a teacher was sitting by herself at her desk eating her lunch. She looked suspiciously Asian and suspiciously Hmong,” he laughs. So they stopped in to meet her and ask about the Hmong culture at Como. Clark asked if there was a Hmong language class at the school “and she told us Harding High School had one.” Clark contacted the teacher who taught that class, Dang Soung, and “we had him come over to Henry and talk to leaders of the Asian Club.”

Senior Soua Chang wasn’t a member of the Asian Club last year, but when a petition began circulating around the school to institute a Hmong language class she signed it and got involved. First, the students met with Harding’s Soung. “He filled us in on how it started [at Harding]. He gave us the curriculum,” Chang says. The Patrick Henry course is modeled after that class at Harding.

School board member Lydia Lee and Superintendent Bill Green met separately with the students. “Then we went to talk to the school board,” Chang said. MaiKa Lee, Sura Vue, Neng Vang and Chang all went before the board to present their proposal.

Compton says the students “were able to construct an extraordinarily logical and rational argument as to why this course is necessary and important to Minneapolis Public Schools.”

The presentation was nerve wracking, according to Chang. The students showed their petition, which had 400 names on it, and a board that outlined their proposal.

They emphasized that 39 percent of Patrick Henry’s student population is Hmong and more than 50 percent of the honor roll students are Hmong, Vue says. He also brought up how learning the language can help ease tensions between the American Hmong students (students who have grown up in the United States) and the recent Hmong Thai immigrants.

The clincher: Chang says they pointed out how Roosevelt High School in Minneapolis has a 16 percent Somali population yet the school offers an Arabic language class.

“They had to make a powerful case,” Clark says. “It is a good thing for the district to do this because they want to keep the Hmong students in Minneapolis.”

Pasee Moua, the Asian Club’s public relations officer, was born in the United States. Her parents were born in Laos. “I barely speak Hmong,” she says. “I think it’s important to carry on the Hmong language.”

MaiKa Lee agrees: “We are losing our culture.” Lee was born in Thailand. Her parents were born in Laos and she says they don’t speak English. Learning their language is a “way to understand our parents more,” she says. 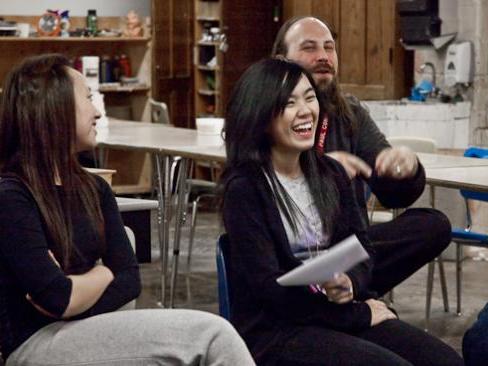 Of the six students interviewed for this story, three were born in the United States. The other three were born in refugee camps in either Thailand or Laos. Because they have been raised in homes where Hmong is the spoken language, Compton says teachers assume the students are fluent in their parents’ native language.

“What they are really speaking is ‘Hmonglish,'” he says. “Some ideas or words don’t translate. Parents have no concept of what their student is doing.”

Parent-teacher conferences are trying for both parents and teachers. Parents “don’t come to the conferences because they don’t understand what the teachers are saying,” Chang says. 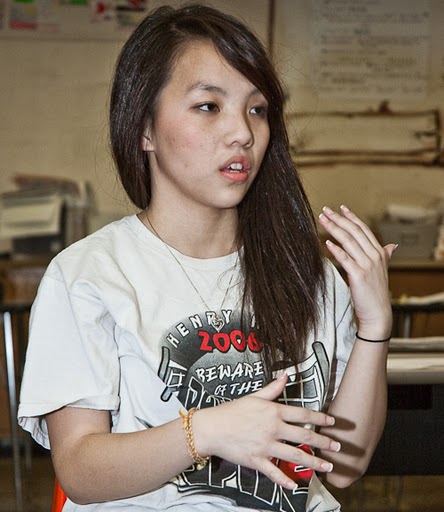 Henry High School senior Neng Vang says she does not know how to explain words like “scholarship” and “essay” to her non-English-speaking mother. (Photo ©Debra Fisher Goldstein)

Neng Vang says she tries to translate to her mother, “but my Hmong is not as good. I’m not saying exactly what the teacher is saying. My mom asks if I’m telling her everything.”

Compton says that’s a problem for both teachers and parents. “The teacher says she said all this stuff and the student only says a sentence to the parent.”

Even the words “Asian Club” have no translation into the Hmong language. Chang says the best word they can come up with in Hmong translates as “agency.” Ia Vang, a junior, says school in general is hard to talk about with parents.

The downside to this new class is that many of the seniors will not be able to take it because they’d have to drop another class. “Many are involved in the International Baccalaureate program and are working on their IB diplomas,” says Ia Vang. To get those diplomas they need to be in six of the IB classes this next semester.

Nevertheless, Chang says Patrick Henry needs a class like this: “It’s an identity, a pride thing. Our school is made up of 39 percent Hmong. We play a large role in our community.”