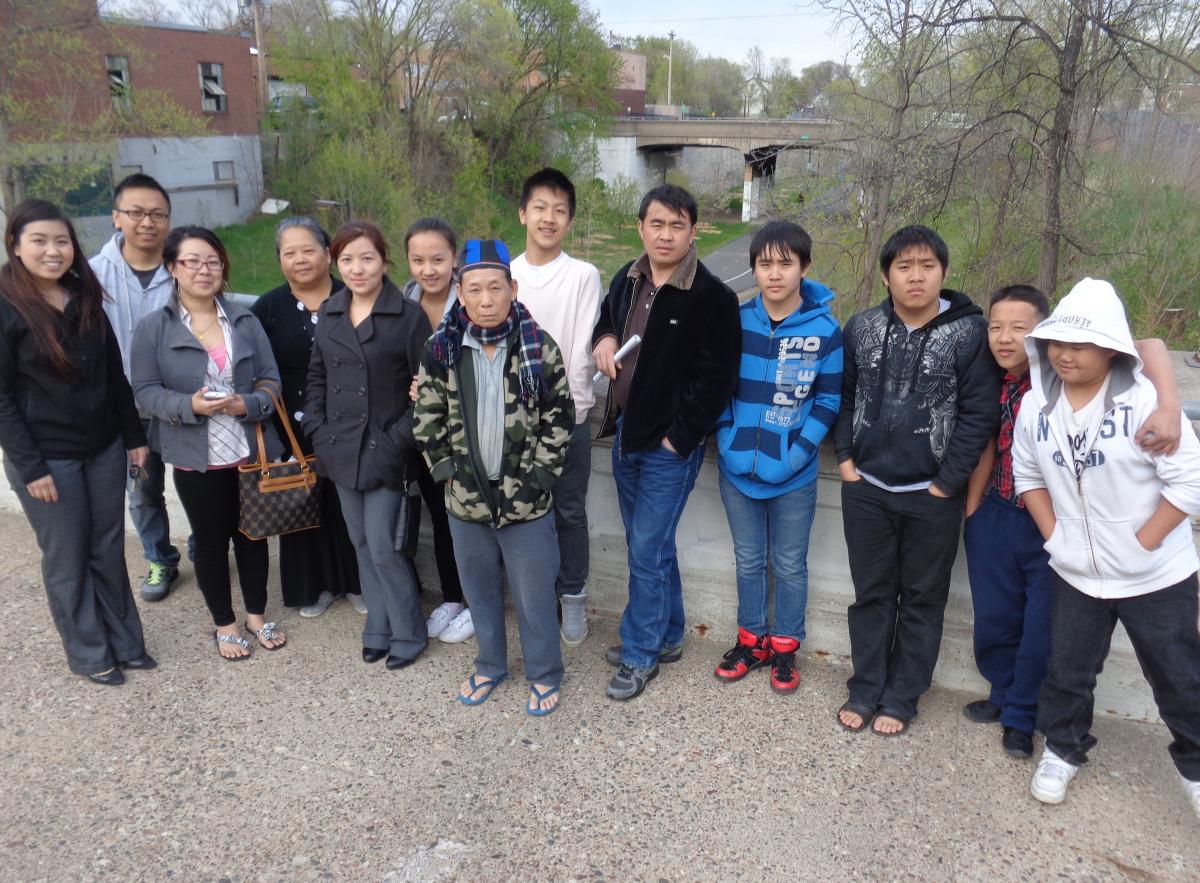 All the participants live on one of the proposed routes for the North Minneapolis Bikeway.

During their tour, the families saw all three major types of bikeways as described by the city of Minneapolis:

Bikeway half and half. Bikeway on one half of street, car traffic on other half. Seen by Hmong families at 37th Ave. N. east of Logan. 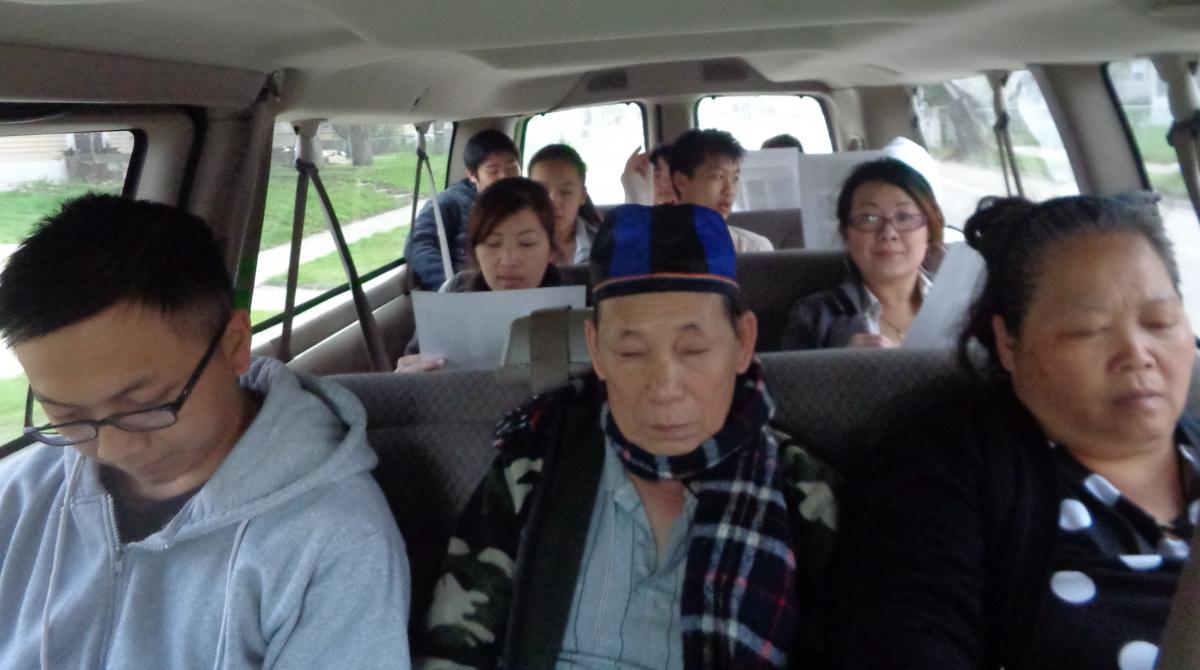 Hmong families read up on bikeways as tour heads for first stop.

At each stop, the Hmong families were asked what they liked about the bikeway, and what they did not like.

Following the tour of the bikeways, the families voted on their bikeway preferences. 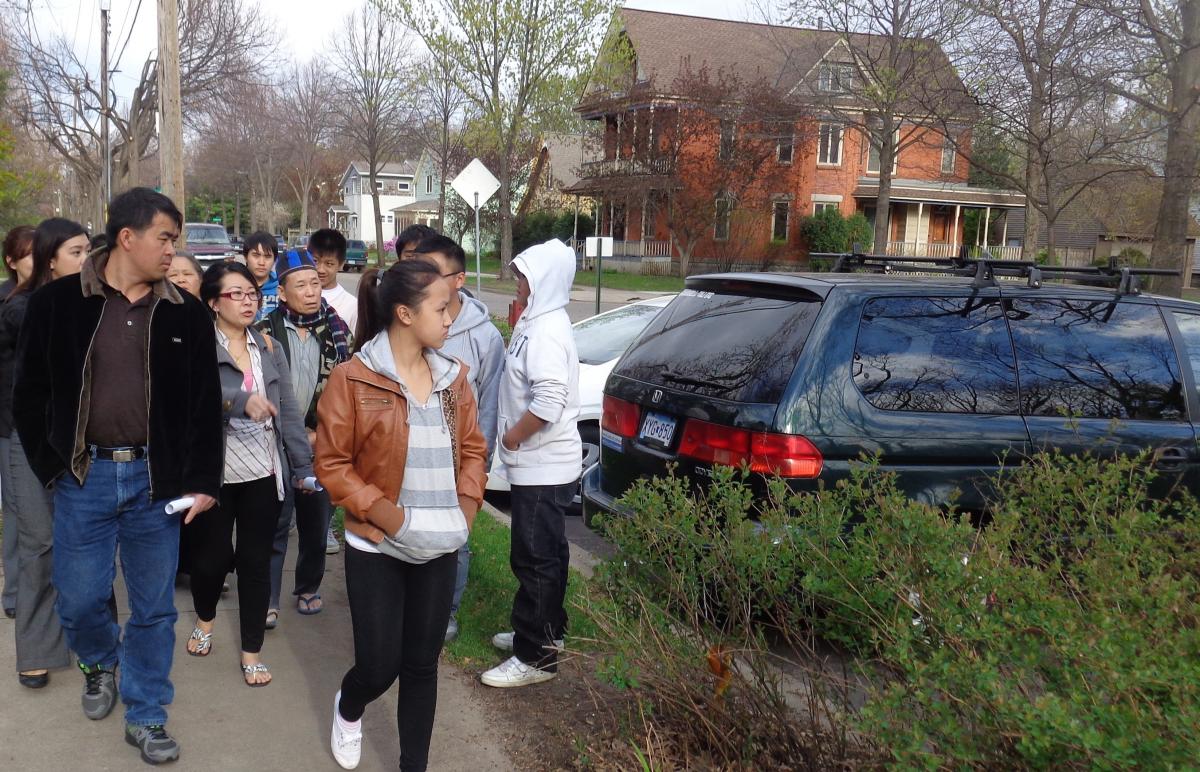 The tour’s first stop was the Milwaukee Ave. bikeway and greenway. They saw the corner parking lots used by Milwaukee Ave. residents, then walked around the open space. 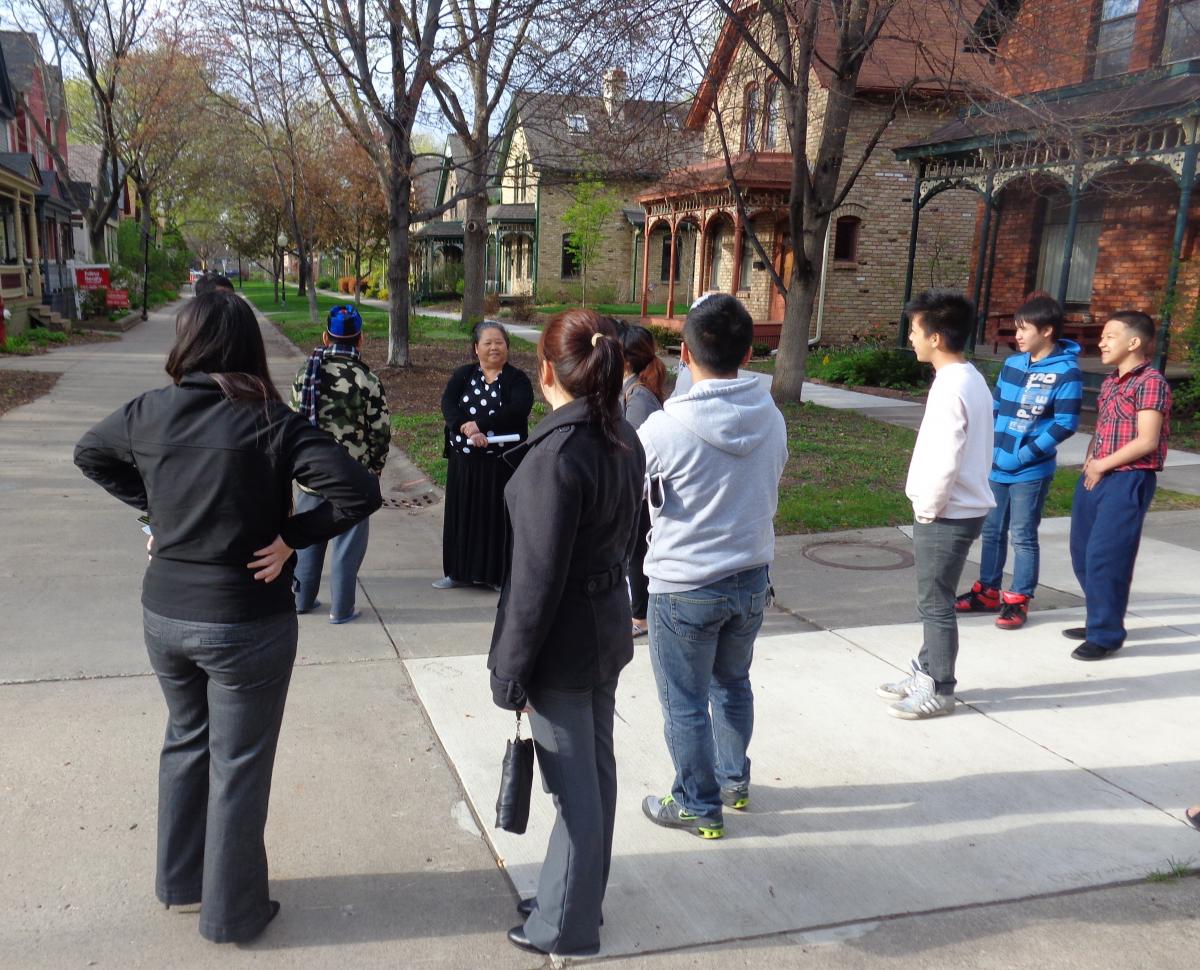 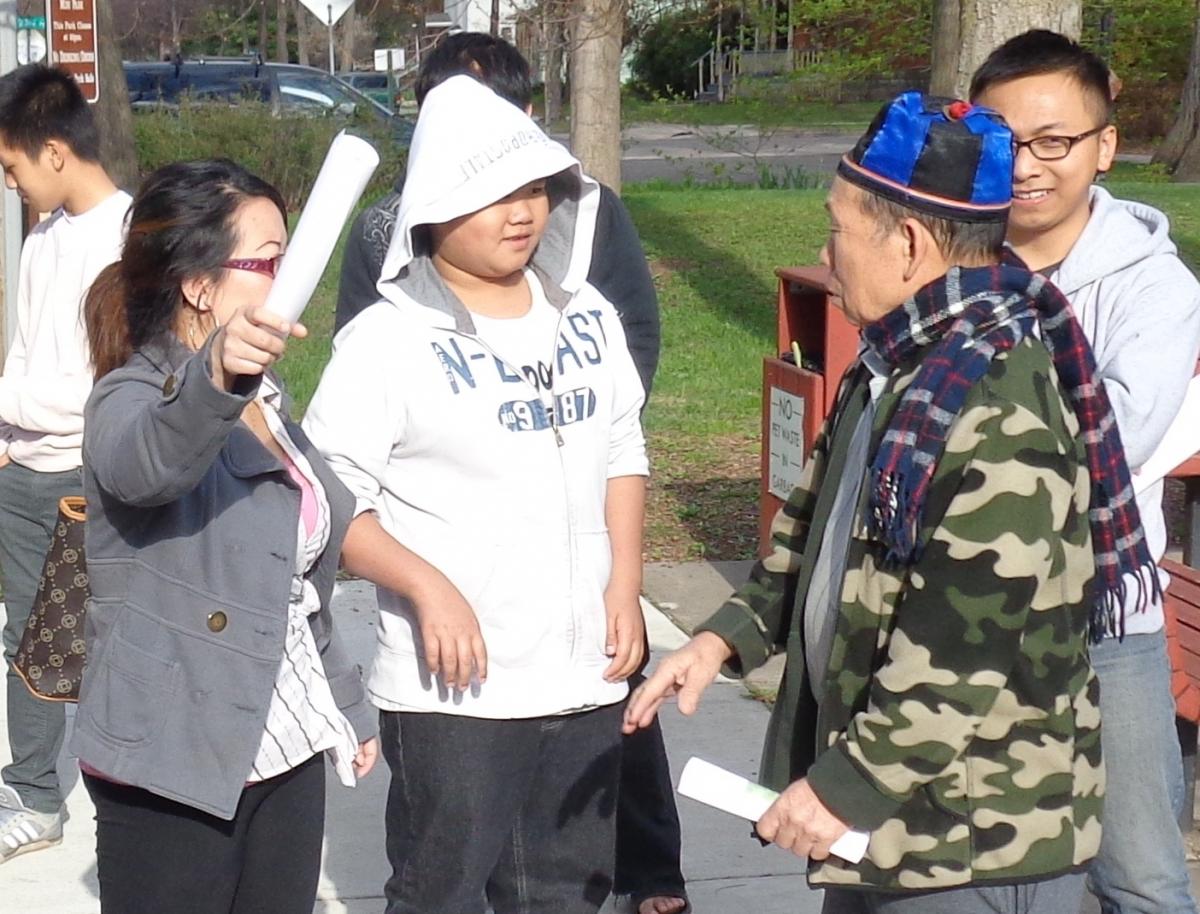 Debating pros and cons of bikeways

One participant mentioned that Hmong families often have religious ceremonies and other gatherings where 50 or more people come to visit, and saw no place on Milwaukee Ave. to accommodate their cars. 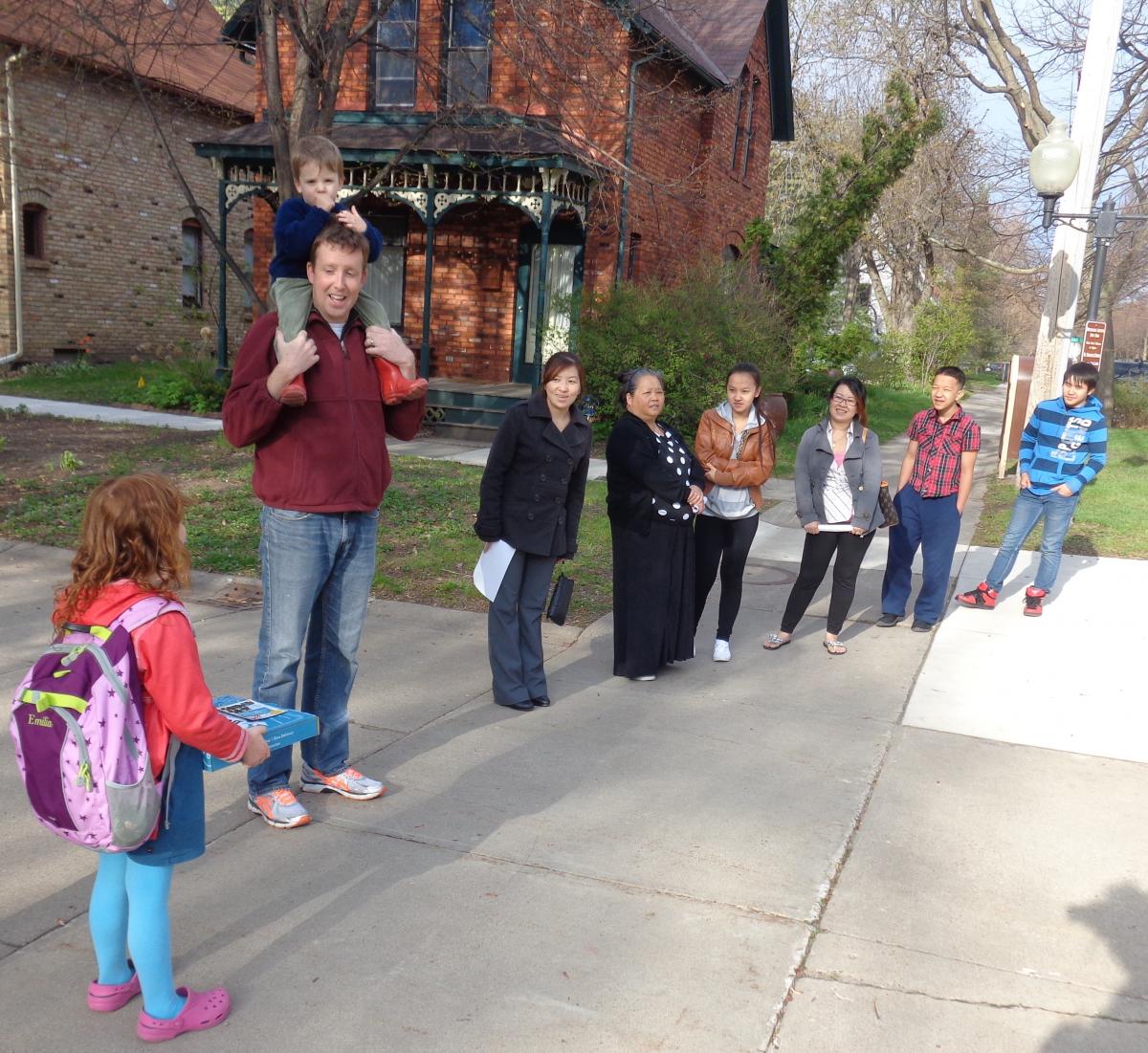 The Hmong families also had a chance to talk with some of the local residents. The local residents’ comments about the bikeway were largely positive. When one local family said house values had greatly increased since building the greenway, one of the Hmong moms worried that she could be priced out of her house.

Following the tour, one participant wondered how pregnant moms with toddlers in tow would manage hiking between their houses and the corner parking lot several times a day, especially in winter.

A mom also wondered how children would be dropped off and picked up at her daycare.

As they toured the Milwaukee Ave. bikeway, they saw several families walking by with Pizza Lucé boxes. Apparently an underreported economic benefit of bikeways is a spike in pizza sales.

Next the families headed over to the Midtown Greenway at 12th Ave. S. 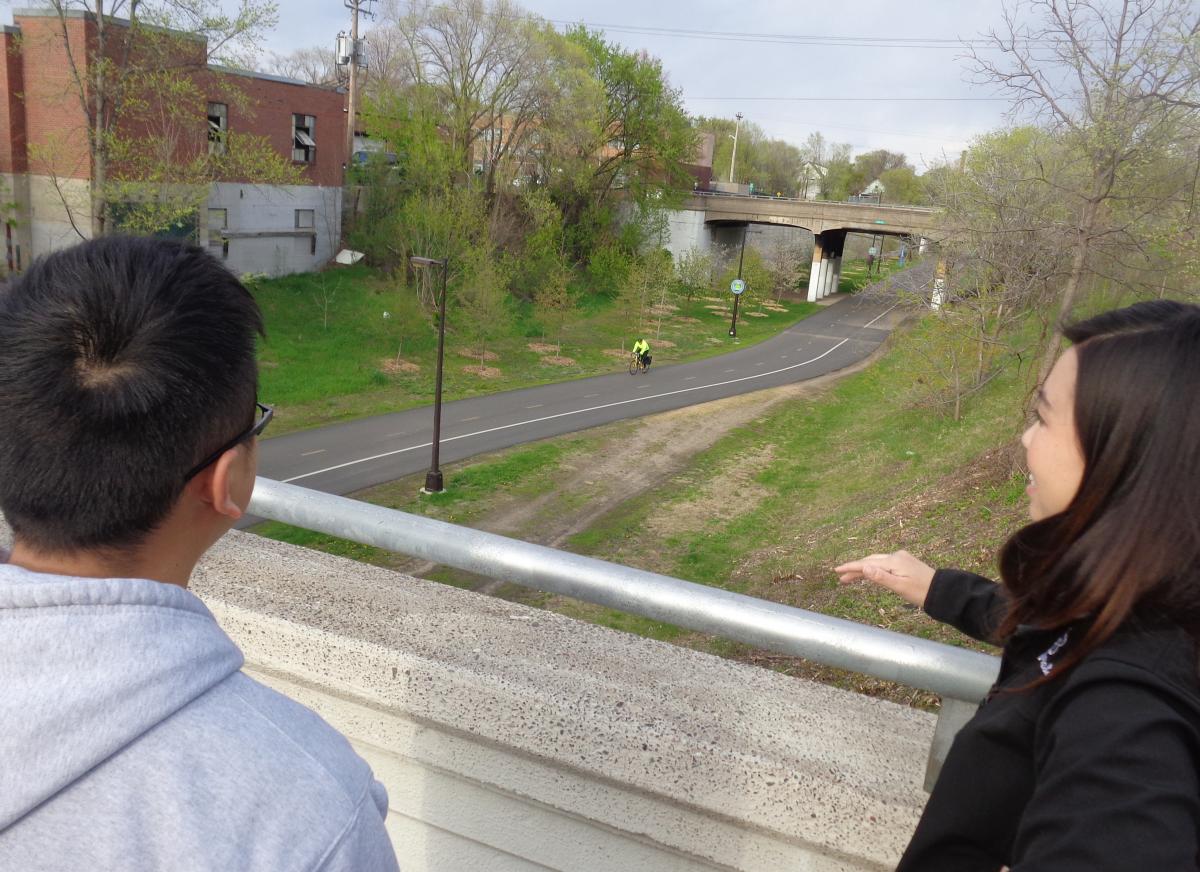 They waved at bikers going under the bridge, then evaluated the bikeway.

Their next stop was the Bryant Ave. bike boulevard at Lyndale Park. 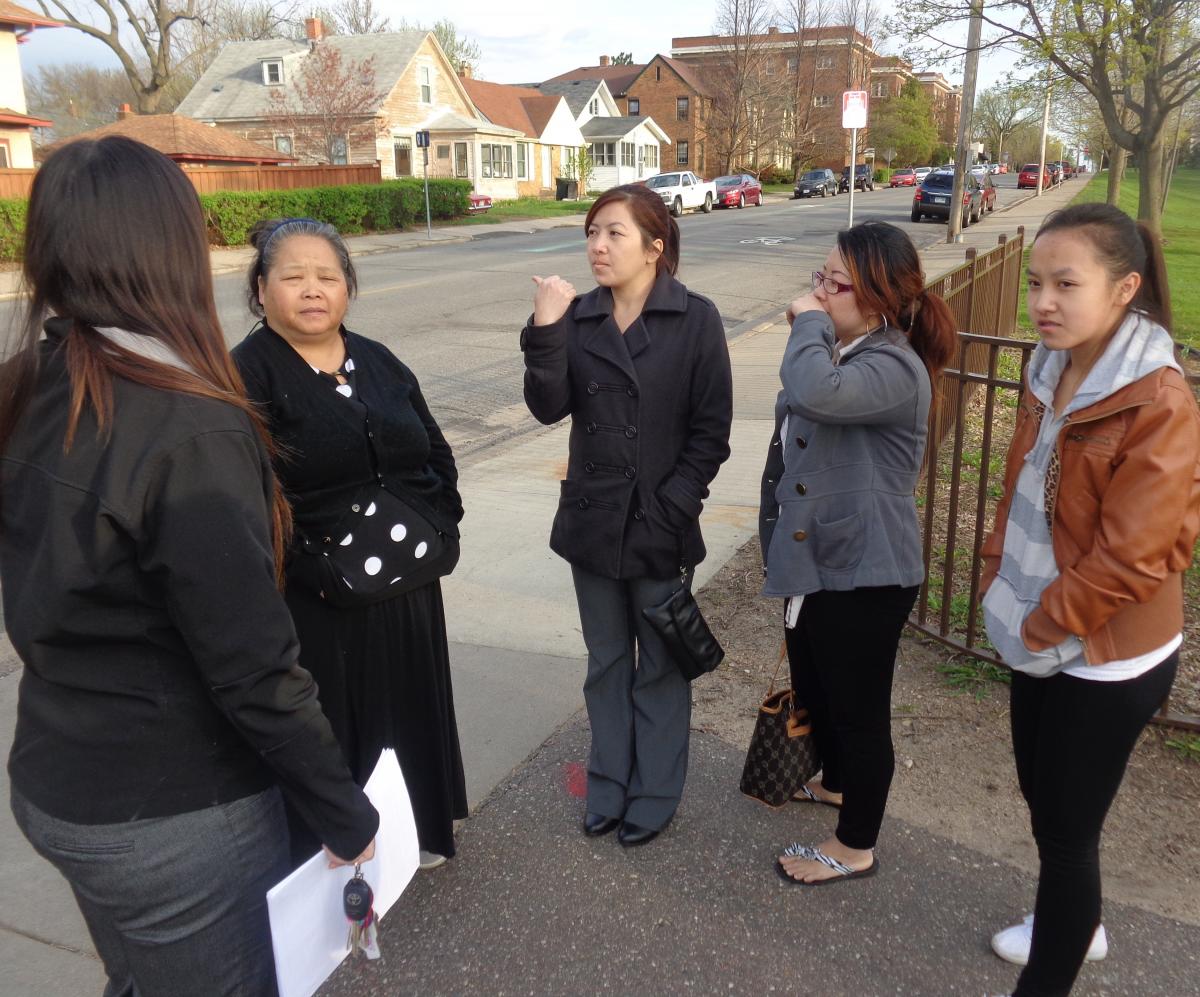 Scouting out bike boulevard at Bryant and 39th St. S

The final stop of the tour was the bikeway at 37thAve. N. and Logan. They especially scrutinized the block between Logan and Knox, since this was the only example of a bikeway half and half. 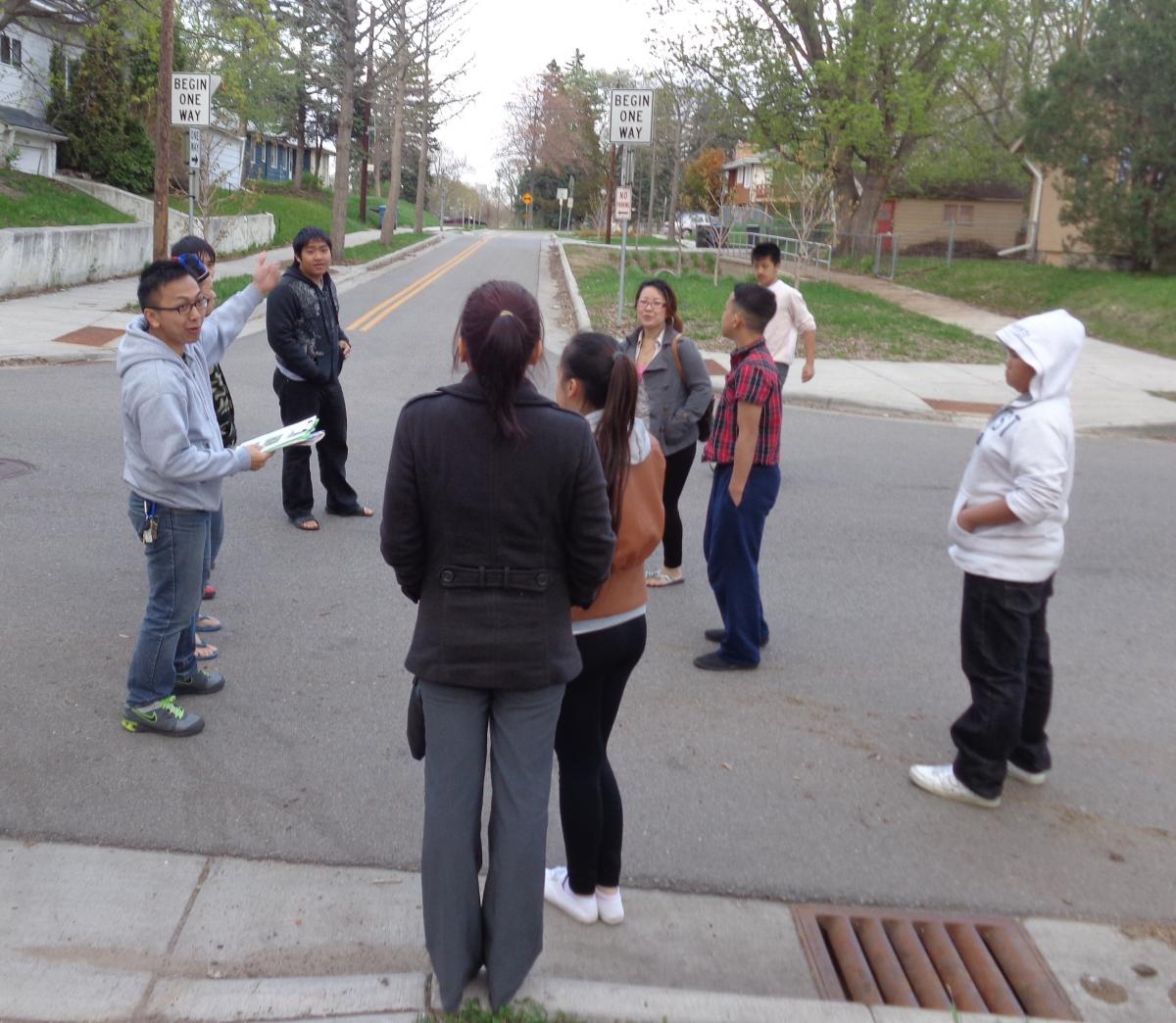 Checking out bikeway half and half at 37th Ave. N. and Logan.

Positives Hmong families mentioned about the 37th Ave. N. bikeway half and half:

Negatives Hmong families mentioned about the 37th Ave. N. bikeway half and half:

Following the tour, the Hmong families gathered in the back yard of one of the participant families on the 3600 block of Logan. 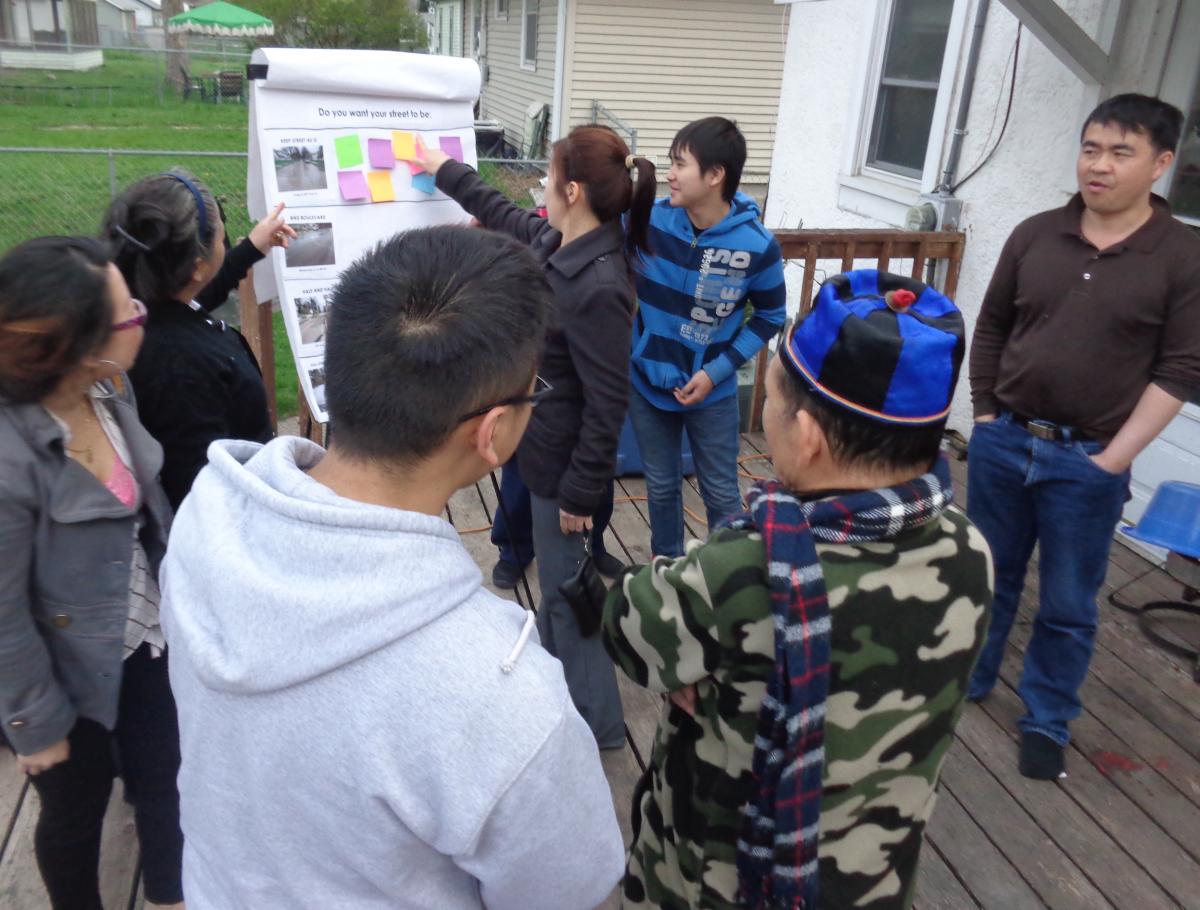 They talked about what they experienced, then voted on three questions to find out their preferences for bikeways on their streets. 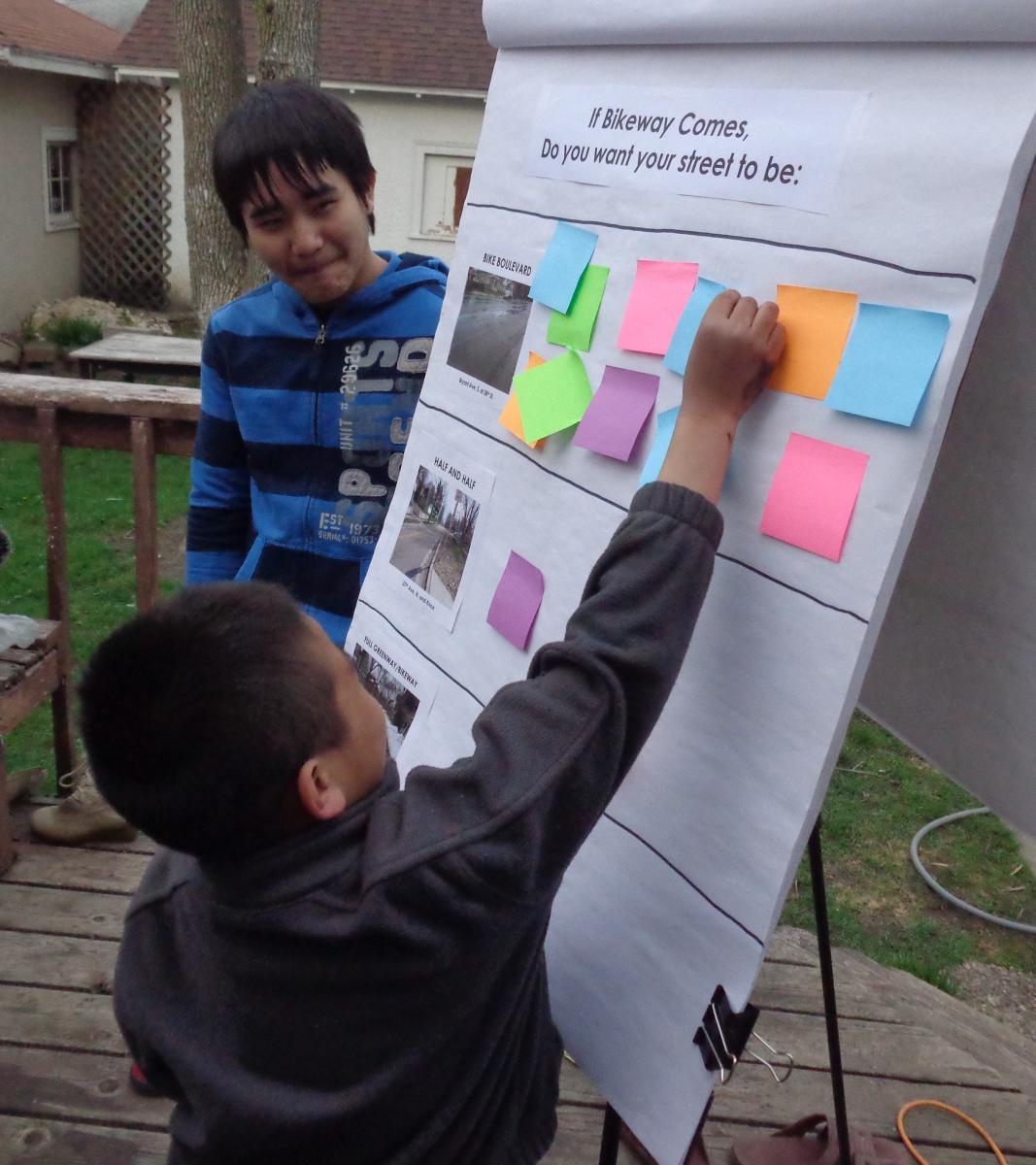 The questions and the vote results are listed below.

Question 1: Do you want your street to be:

Bikeway Half and Half – 1

Question 2: If Bikeway Comes, Do you want your street to be:

Bikeway Half and Half – 3

Question 3. If Bikeway Takes your Parking and Your Street, Do You Want Option of Having Your House Bought Out With Moving Expenses Paid For?

After reviewing their votes, some tour participants said that North Minneapolis hmong kids when riding their bikes have been ambushed by other youth, knocked off their bikes, had their bikes stolen out from under them, and sometimes have been hit and kicked. Some participants said that because of these strong arm bike thefts, many Hmong in North Minneapolis won’t ride bikes. Because of these bad experiences with bikes, some family members said they saw the bikeway as of little benefit to them.  They also worried that others riding the bikeway could be victims of these strong arm bike thefts. 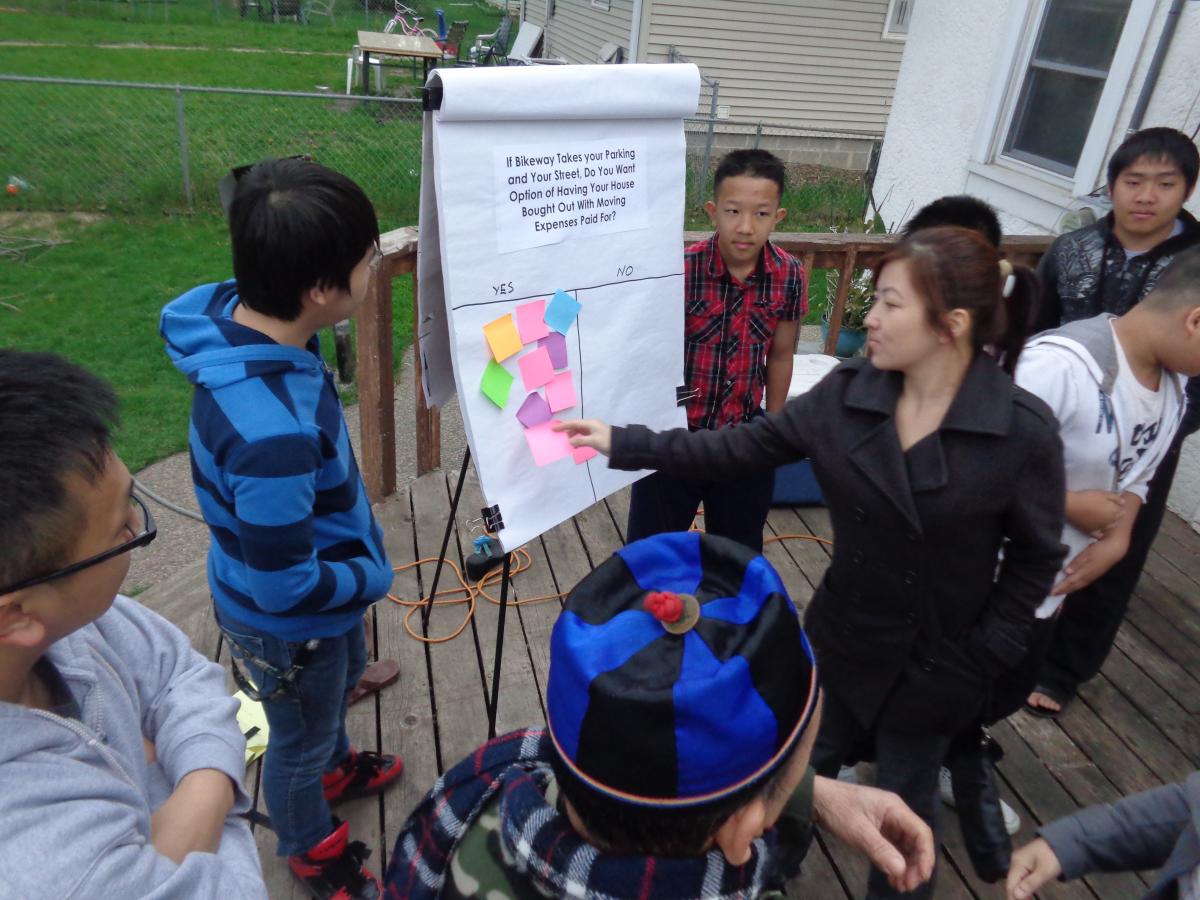 Unanimous: if bikeway takes out our parking and street, we want our houses bought out

When the vote was over and the families were driven home, several emphasized that if the bikeway is built and takes out their parking and street, they want to have their houses bought out and move.

Tour participants will be asking for a meeting with councilmember Blong Yang and will be sharing their observations with other elected officials. Tour participants also filled out questionnaires provided by the Jordan Area Community Council, and Hmong residents will be participating in JACC’s Open Streets activities. Hmong families also hope to go back and try out Pizza Lucé. 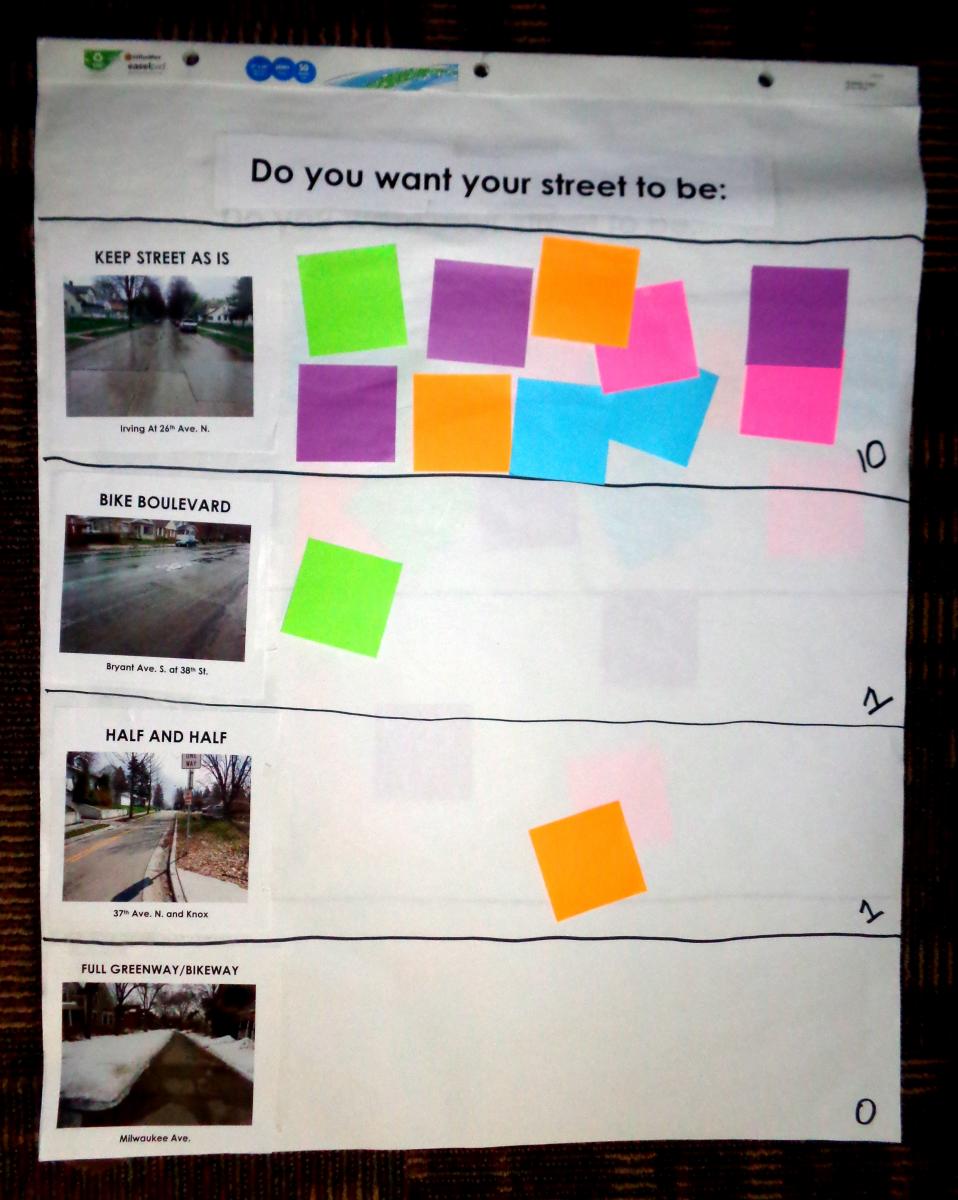 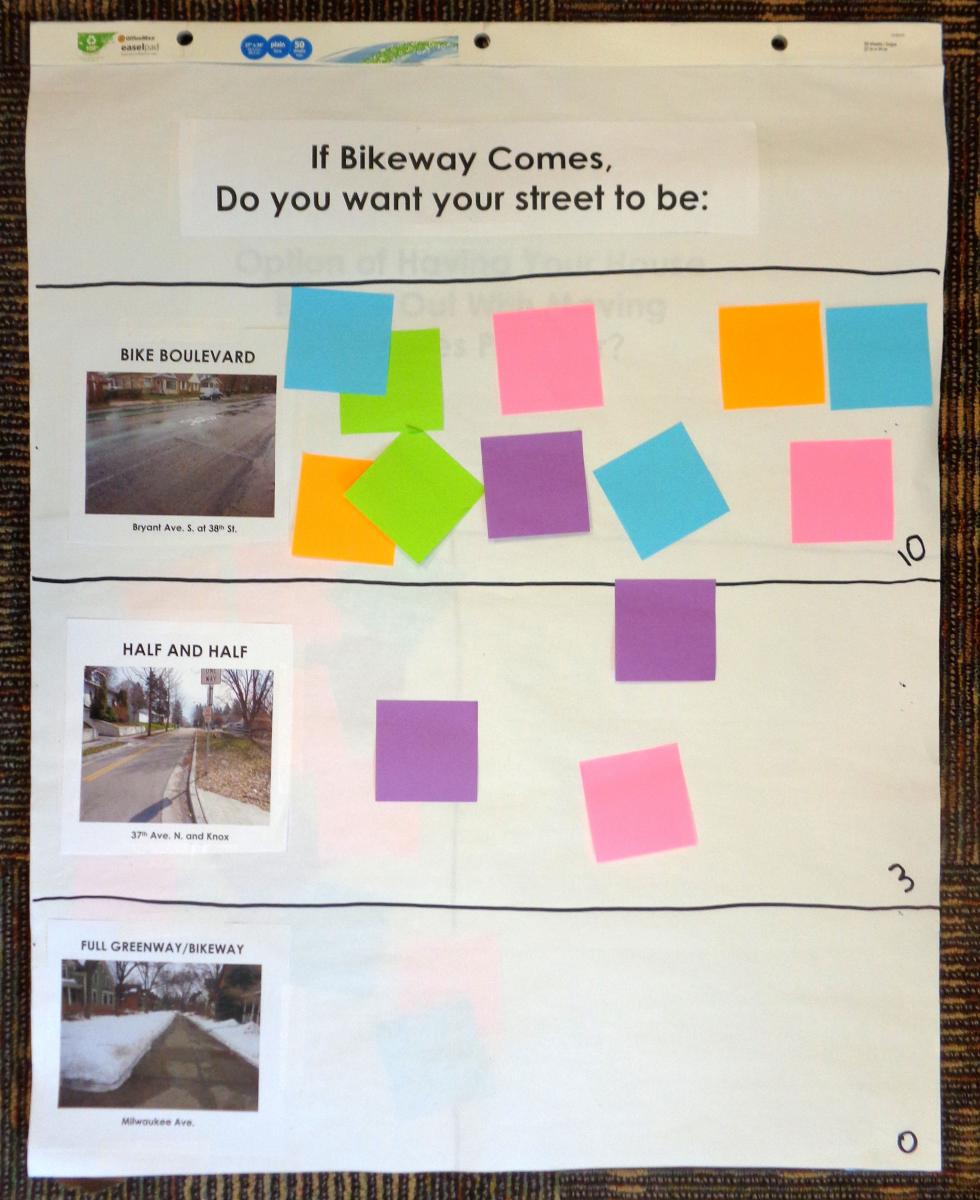 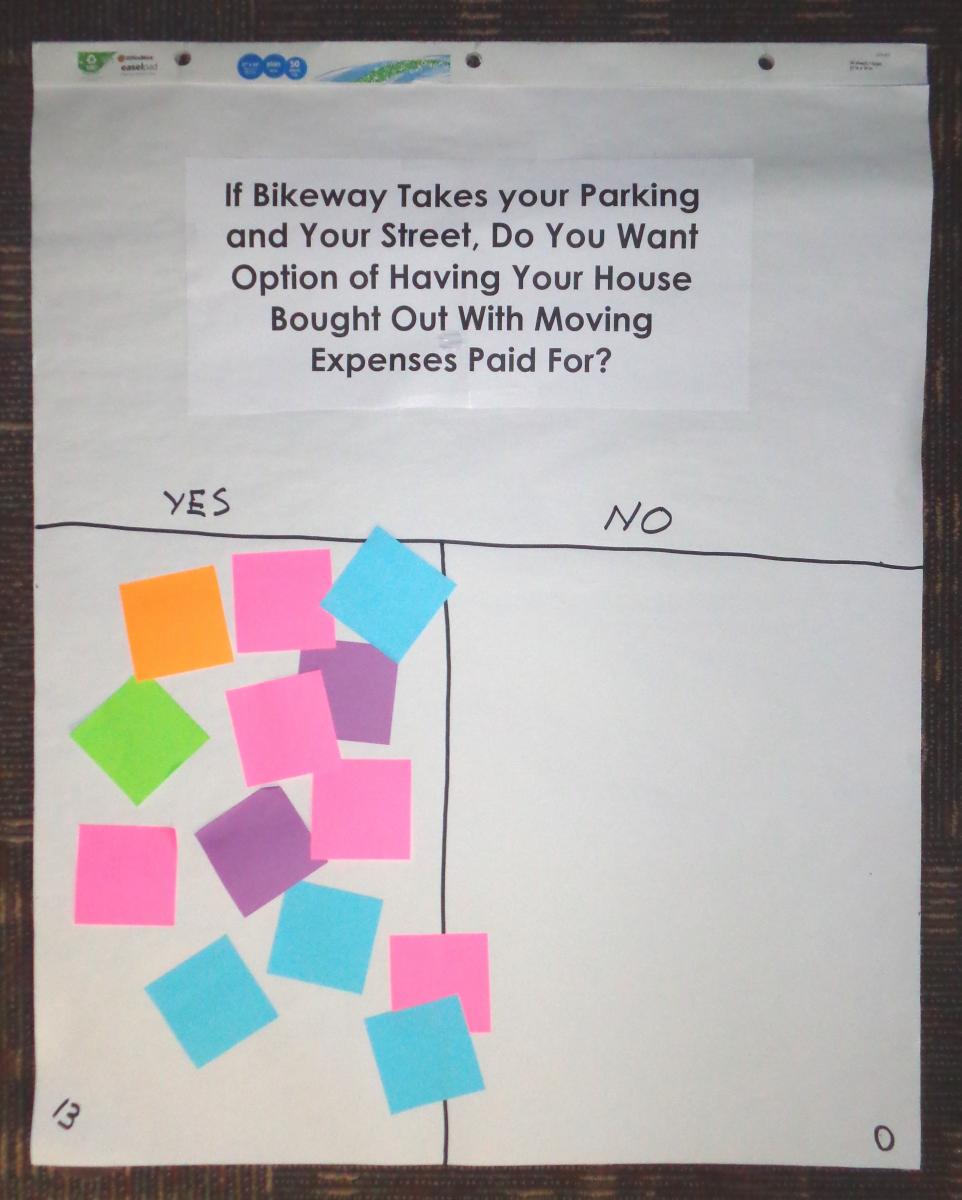 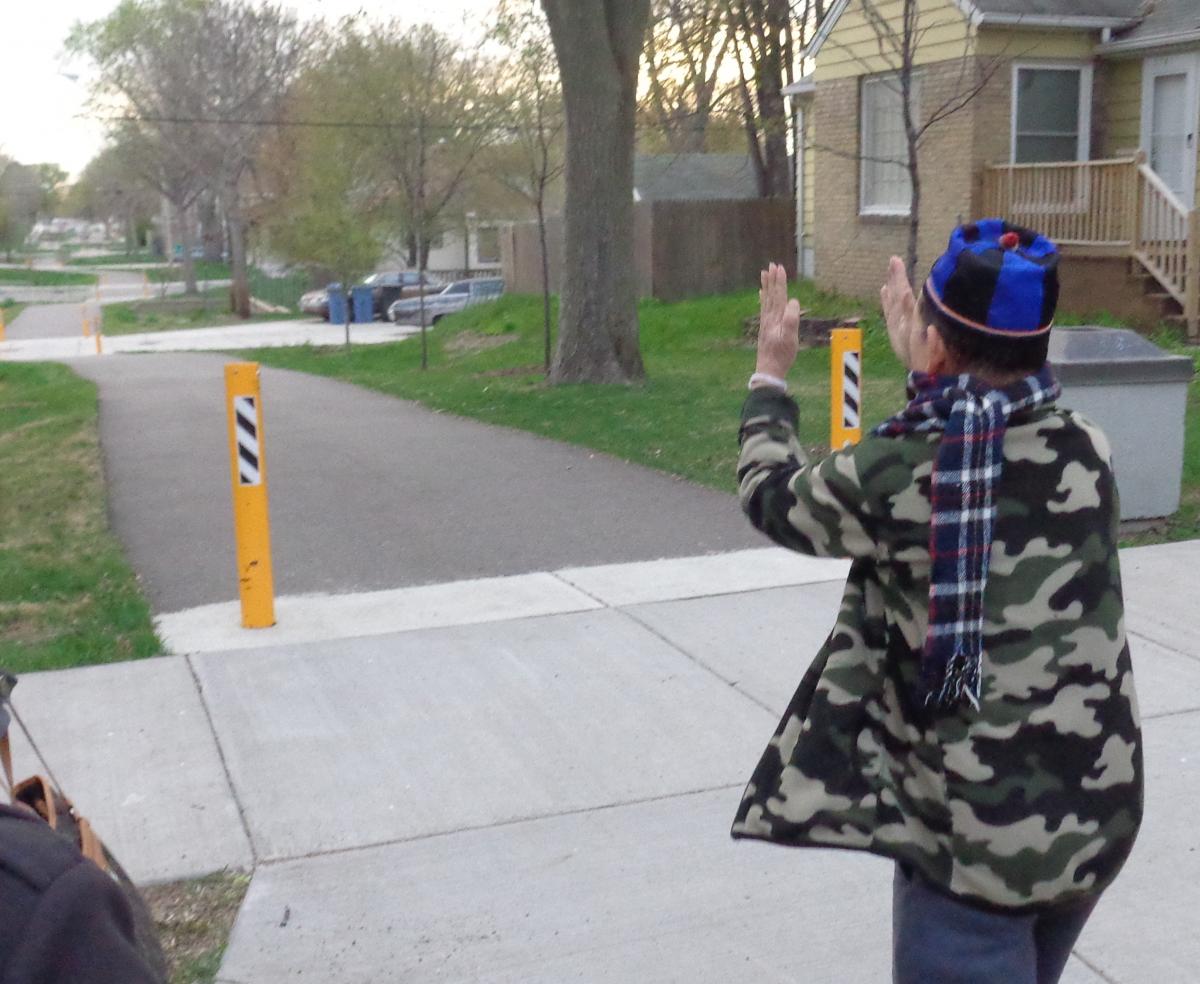 Five days after the bikeway tour, one of the participating families held a religious ceremony for their recently deceased grandmother.  Scores of relatives and friends came over, and their block was packed with parked cars.  The dad questioned how he and his family could do their religious ceremonies, and have their relatives and friends come over and participate in the ceremonies, if their street and parking was taken and replaced with a bikeway.