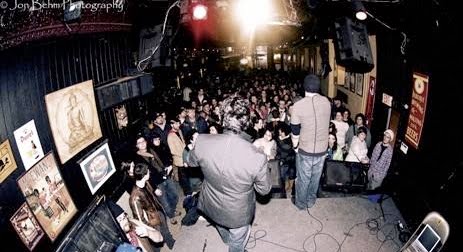 We started throwing these Hip Hop Against Homophobia shows in Minneapolis back in 2009 or so, and have since thrown more than a dozen of them all around the state. While the shows have sometimes raised money for different LGBTQ organizations, the main idea behind the concert series is bigger than that. We wanted to create space for healthy community collaboration. We wanted to highlight the overlap that already exists between the Twin Cities’ big, vibrant, diverse hip hop scene and big, vibrant, diverse LGBTQ culture. We wanted to throw fun rap shows that were also explicitly safe spaces for people no matter how they identify.

The power of the HHAH series isn’t just about confronting homophobia in hip hop, though that’s certainly part of it; it’s about the idea that when communities come together, they become even more powerful. When we highlight and cultivate these kinds of overlaps and collaborations, the potential for new connections, new strategies and more increases. Even when people don’t come to the shows, seeing the phrase “Hip Hop Against Homophobia” on a flyer or Facebook invite has power.

At past shows, we’ve tried to feature a mix of LGTBQ-identified artists and straight allies (including Toki Wright, Tish Jones, Mike Mictlan of Doomtree, Heidi Barton Stink, Ill Chemistry, Kaoz, See More Perspective, Maria Isa, Kredentials, Tori Fixx, DJ Shannon Blowtorch, Oskar Ly & Linda Her and more, plus myself). We’ve also tried to be representative in terms of race, gender identity and style. Apart from all the politics, the HHAH series is really about throwing big, fun, substantive hip hop shows– without that, there’s no point. So even though we’re talking about important issues, we’re also celebrating each other and celebrating this culture. I’m really excited about the fact that other people are taking this idea and running with it. A while back, I got to perform at a HHAH at Central High that I had no input in planning and it was great. Things keep growing.

With the marriage amendment on the horizon (and a lot of work to do no matter how the election plays out), we’re throwing a whole bunch of shows in October (probably more TBA) especially shows outside of the metro, where a lot needs to happen. Feel free to spread the word:

October 23 at the Varsity in MPLS (not a HHAH show, but a Vote No on Both Amendments show organized by Take Action MN and MN United; details TBA)

HEIDI BARTON STINK is a visionary MC whose last album, “A Charming Gut,” was one of the most unique, creative albums to ever come out of the Twin Cities scene, at least in my opinion.

SEE MORE PERSPECTIVE is one of the more slept-on geniuses in the local rap scene. He produced all of Heidi’s album and has some brilliant work of his own. We’ve collaborated a bunch.

Also, a quick shout to B.Dolan, who released this song/video addressing homophobia in hip hop and the CeCe McDonald trial:

And Tish Jones, who isn’t rapping in this clip, but is always great (and she hosted the first HHAH):

Top photo: From the first HHAH in MPLS (Courtesy of Jon Behm)