On my way recently to tour Higher Ground, a new and multi-dimensional effort to move the chronic homeless and the working poor off Minneapolis streets into housing, I sat patiently at a green light, waiting while a weary, graying African-American man pushed a shopping cart heaped with all his worldly goods across the avenue.

It was unintentional social-justice theater.

That, I thought, as I drove on and into the nearby Higher Ground parking lot at 165 Glenwood Ave. within shouting distance of hot-spot, high-end theaters and restaurants along Hennepin Avenue, is who this seven-story $14.25 million building is about.

Catholic Charities of St. Paul and Minneapolis expects to open the doors June 18 to this new approach and a new green-construction building offering 336 housing units to people struggling with homelessness — mostly single men and disproportionally people of color.

The facility will provide, under one roof, not only emergency shelter, but permanent housing and supportive services to help with job skills, mental health and chemical dependency needs and other medical care.

And as the Higher Ground name implies, the homeless will be moving off sleeping pallets on the floor of a nearby temporary shelter (around for many years) called Secure Waiting into real beds. 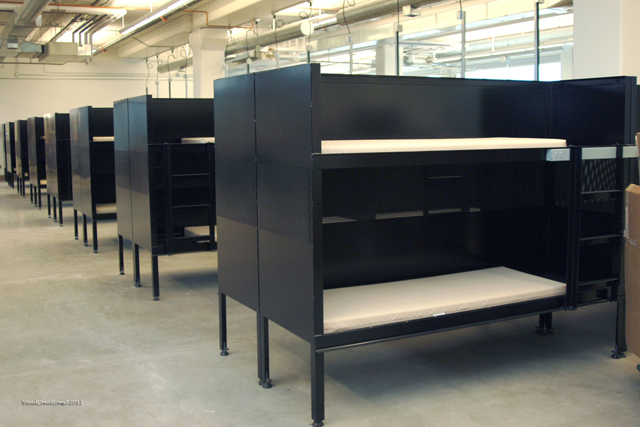 The new facility has: 171 emergency shelter, metal bunk beds with individual lockers; 80 pay-for stay beds for the working poor; 74 single rooms with sink and mini fridge; and 11 affordable efficiency apartments, as well as some communal lounges with kitchen facilities. Rooms are flooded with natural light from windows offering city views.

While Catholic Charities from 2008 to 2010 saw a 22 percent increase in shelter usage and tried to improve conditions at Secure Waiting to meet rising need, “what we’ve always needed is a new building and a new model,’’ says Tim Marx, CEO of Catholic Charities, which will operate the facility.

“Higher Ground brings together some of the best findings from across the country in effectively ending homelessness,’’ Marx says.

John Petroskas, tenant services coordinator at the new place, told me: “There’s nobody who doesn’t want to be housed. There are only people we don’t have the right spot for. Higher Ground is the attempt to solve that problem.’’

Petroskas has spent a lot of time over the years coaxing the chronically homeless off the streets, including those with mental illness and chemical dependency and criminal backgrounds or poor rental histories.

Getting out of homelessness, he will tell you, starts with a mailbox with your name on it. Knowing you have a permanent place to sleep at night and a place to keep your belongings, he says, is a big step toward a healthier, more stable life.

In their pay-for-stay beds, residents who are working – say, making $13 to $14 an hour in temporary jobs — but cannot yet afford an apartment, pay $7 a night for a bed and storage locker, Petroskas says. That money is put aside for them for a security deposit for affordable rental housing. 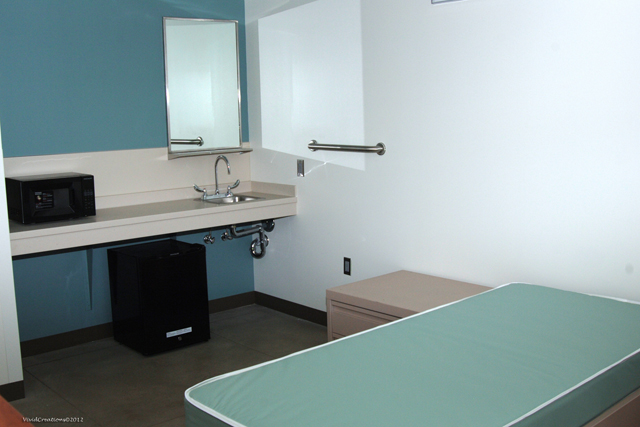 Housing is the start of a better life, agrees Mikkel Beckman, executive director of St. Stephen’s Human Services in Minneapolis, but about 15 percent of the homeless are chronically homeless because they are unable to bypass personal barriers. Staff from his agency will work closely at Higher Ground with a group with the longest histories of homelessness and severe mental health issues.

The number of single adults in the Twin Cities experiencing homelessness has been rising since 2009, with seven new adults entering homelessness every week in Minneapolis, Beckman says, adding that the marketplace cannot afford to produce housing for people with extremely low incomes, say $2,000 to 4,000 a year.

“To not create housing creates more problems,’’ Beckman says, including shelter over-crowding that leads to the spread of illness and people with no place to live wandering city streets committing misdemeanors.

The project is made possible with the help of the Minnesota Housing Finance Agency, Hennepin County, the City of Minneapolis, the Community Housing Development Corporation and other businesses and foundations.

“When people get a chance to be housed…they change in some really remarkable ways,’’ Petroskas says.