After decades of studies, high speed rail connecting the Twin Cities with Rochester continues to inch forward. Last June, Mike Hicks wrote a solid background piece on ZipRail ahead of the first Environmental Impact Statement public meetings. In it, he recalls going to a public meeting for an older Minneapolis-Rochester-Chicago study public meeting back in 1991.

Despite continued plodding and progress on the ZipRail planning front, the bonding proposal which emerged from conference committee last week does not include $15 million to finish this EIS process. It’s the same $15 million that was sought and denied two years ago. But an update from the study team to the Hennepin County Regional Rail Authority earlier this month lends some clues on where this project is headed despite additional funding from the legislature.

High Speed Rail to Rochester would be a mobility game changer for our region. It would add value to public investments in good transit and walkable places on both ends. It would also set the stage for future expansion of true high speed rail onward to La Crosse, Madison, Milwaukee, and Chicago. Intermediate plans would have 110 MPH “medium speed” rail from Minneapolis to Chicago along the current Empire Builder route, bypassing Rochester. But if true high speed rail is going to come to our city, those of us on the Minneapolis end need to advocate for it – for the line to move forward in general, and for the line to serve existing urban terminals specifically. 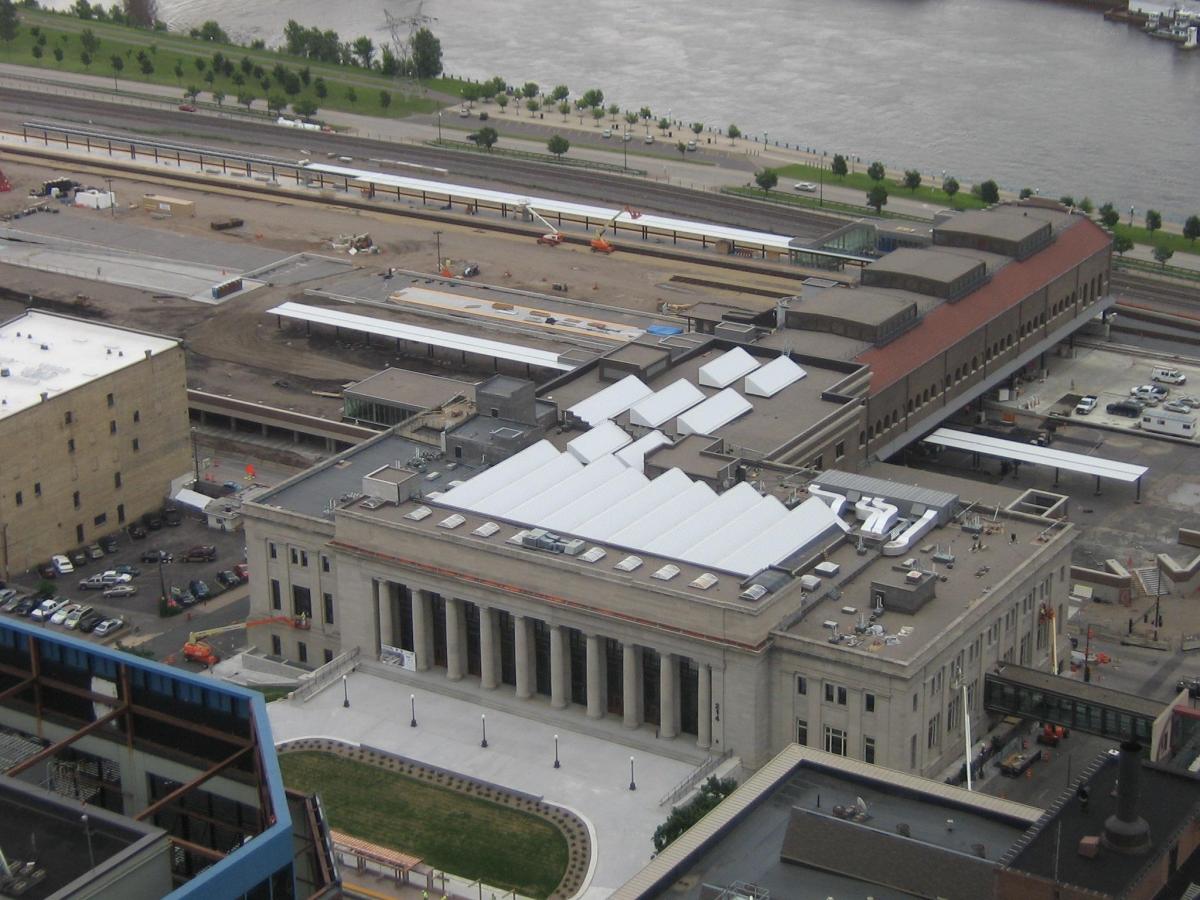 ZipRail as studied right now would connect St. Paul with Rochester, a distance of about 75 miles on US Highway 52. Delta currently offers five flights per day connecting MSP and Rochester International Airport, mostly serving passengers connecting from other cities to Rochester via our airport. There are also private shuttles which carry Rochester travelers to MSP Airport, and there are commuter buses that carry Twin Cities residents to jobs in Downtown Rochester.

This investment would also pave the way for future high speed service to Chicago and beyond. Previous Midwest HSR studies have suggested the “river route” for 110-MPH service (basically a faster and more frequent Empire Builder) or an Eau Claire route for faster service down the road. But building new 220-MPH rail service from Minneapolis to Rochester would likely anchor future service to Chicago once we go truly high speed, resulting in greater benefits for both cities once onward connections are built.

Having an eye towards this future connectivity is critical if we’re serious about mitigating environmental impacts of MSP Airport. By my count there are 142 commercial airline flights today between Minneapolis and Rochester, La Crosse, Madison, Milwaukee, and Chicago. And 96 flights between Chicago and Minneapolis alone, averaging one flight at MSP arriving from or leaving to Chicago every 10 minutes from 6 a.m. to 10 p.m.

Rochester might see the primary gains from an initial line that ends there, but the Minneapolis region gains from leveraging this investment to connect onwards to Chicago down the line. Minneapolis would win due to lowered demand for air service in the corridor, thus mitigating environmental harms of our urban airport. And our city would also win in the long run because high speed rail stimulates demand for travel similar to how low-fare airlines actually create their own market segment. With more travel to and from Chicago and other Midwestern cities, we will be less of an economic island here in the Upper Midwest. The ZipRail proposal is critical in setting the stage for a complete network.

I attended a public meeting for ZipRail about a year ago, and at that time the “universe of alternatives” for the route had dozens of possibilities. This has now been narrowed down to two choices for two segments of the line. 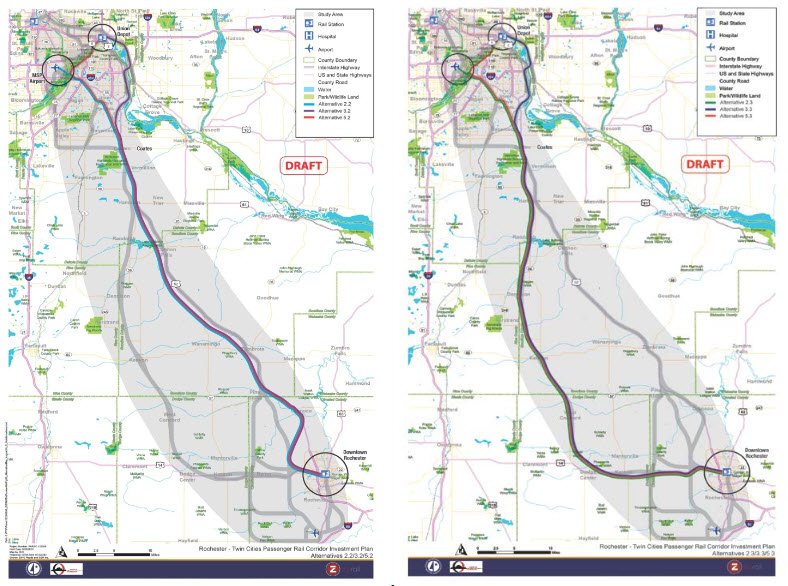 The first choice is whether the majority of the route should be built along US Highway 52, or if it should be built along the abandoned Chicago Great Western railroad between Coates and Dodge Center before heading east into Rochester. This seems to be more of a technical decision, but I’m curious to hear if someone has a preference.

The second choice pertains to how the line would approach our city, and this is a critical decision that will be made relatively earlier in the process. This has the potential to do to ZipRail what the route decision did to Southwest LRT, costing a significant chunk of money and popular support later along the process. The line would either end at MSP Airport or at St. Paul Union Depot.

ZipRail, like all future regional/intercity rail lines, needs to connect to our urban cores. We’ve invested in our urban facilities: The $243 million renovation of Union Depot in St. Paul restored a masterpiece, and the $82 million Target Field Station just opened this past weekend. It would be irresponsible to build a third regional rail station at the airport. More importantly, a primary benefit of intercity rail is that it serves city centers – walkable, transit-connected places. Our downtowns fit that bill.

Some say an airport station makes sense to facilitate rail to airplane connections. But service to airports should be considered supplementary, not a primary purpose of intercity rail travel. Such connections can work well: Newark and Baltimore have airport stations on the Northeast Corridor, or Charles de Gaulle Airport has a station on the French TGV. The German ICE connects passengers to Lufthansa flights at Frankfurt Airport. But these all supplement primary service to city centers which existed first and still serve the vast majority of users. Can we imagine the Northeast Corridor ignoring Manhattan’s Penn Station because there’s a station out at the airport? Or the TGV lines ending at the Paris airport rather than ending at four of the city’s urban rail stations? It is critical that intercity rail goes to our city.

In general, it makes sense for rail to approach either St. Paul or Minneapolis depending on how easy the approach is. Rail to Rochester or Chicago makes sense to connect at St. Paul Union Depot. The proposed Northern Lights Express to Duluth would logically terminate in Minneapolis since it would use BNSF tracks which approach Minneapolis via Coon Rapids. Passengers can then use transit such as the Green Line or the 94 bus to reach their destination if they are heading to the other downtown. But in the long term, it would be smart for us to “through-route” all heavy rail trains (commuter rail such as Northstar, regional rail to places like Duluth or Mankato, and high speed rail to Rochester and beyond) via both St. Paul and Minneapolis. I have some technical details for how we can make that a reality, but I’ll save those for the transportation forum over at UrbanMSP.

Getting from here to there

Will Rogers once said, “Even if you’re on the right track, you’ll get run over if you just sit there.” Those of us who are transportation and land use advocates in Minneapolis need to join with advocates in Rochester to make this project move forward. First, it’s critical we move forward on the right track, which is a line to St. Paul (and someday Minneapolis) rather than the MSP airport. Second, we need to actively push for this line at critical moments – such as upcoming legislative sessions – to make this a reality.

We can’t just sit here in our current framework of car- and airplane-dominant intercity transportation options. The rest of the world is passing us by with a travel mode that is much more compatible with building quality walkable cities with compelling public spaces and connected amenities.

At top: Promotional rendering of ZipRail