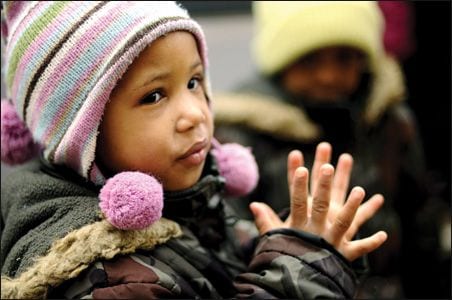 A Wilder Research Center homeless count in October 2009 found that the more than 3,200 children counted made up 34 percent of the homeless in the state. (Photo by Caroline Yang/Courtesy of People Serving People)

The negative effects of homelessness on kids are well-known. In school, homeless children are absent more frequently and tend not to do as well academically. Outside school, because of dangerous living environments and traumatic family experiences, their families are more likely to be involved with child welfare authorities.

But put them and their troubled families into supportive housing and life generally gets better for these children, according to a study released this week by a network of supportive housing programs and the University of Minnesota.

The study is notable in part because of the proportion of children among the homeless in Minnesota. The most recent and highly regarded Wilder Research Center homeless count in October 2009 found that the more than 3,200 children counted made up 34 percent of the homeless in the state. Almost two-thirds of homeless persons of all ages were people of color.

According to the new study conducted by the University’s Center for Advanced Studies in Child Welfare and released on Wednesday, children living in housing situations that provide rental assistance and family-case workers have fewer school transfers, are less involved in reported cases of abuse or neglect and are less likely over time to be removed from their parents’ care than homeless children.

In addition, some age groups of the third to sixth graders studied saw positive results in school attendance, standardized math results and development of Individual Education Plans (IEPs). The findings, according to the analysis, suggest continued improvement with children’s steady school attendance may depend on services offered. Some supportive housing programs, for instance, offer academic tutoring to youngsters.

“There are positive trends in outcomes across most of the measures for kids in supportive housing,” summarizes Kristine N. Piescher, co-author of the study with Saahoon Hong. Keep in mind, she urges, that these children live in families dealing with “severe challenges” such as mental illness, disabilities and long-term homelessness and “any positive movement” is important.

Richard Hooks Wayman, executive director of Hearth Connection,  managers of a network of supportive housing programs and the people who initiated the study, lauded study results. “We believe that permanent supportive housing is an evidenced-based program to end homelessness for families and children,” says Wayman.

Evaluations of the effectiveness of supportive housing services on children are rare, Piescher says about the study of three years of data. Usually, studies look at the effects of services on adults by measuring such things as parental income and housing stability.

Studied were 70 children who live with their families in supportive housing provided through the non-profit Hearth Connection, as well as 342 children defined as homeless by school districts. No children or families were interviewed. Rather the study is a data analysis made possible by multiple state agencies that share data through Minn LInK, collaborative formed for research on child and family well-being.

According to the report, “The most common profile of a homeless family is one headed by a single woman in her late 20s with approximately two children, one or both under six years of age; those at greatest risk belong to ethnic minority groups.” Families are extremely poor, lack education and employment skills and tend to have personal histories of trauma and violence as well as substance abuse.

The groups of homeless children and housed children were “matched as closely as we could,” according to age, race, ethnicity and family income, says Piescher, who recommends ongoing study of the children.