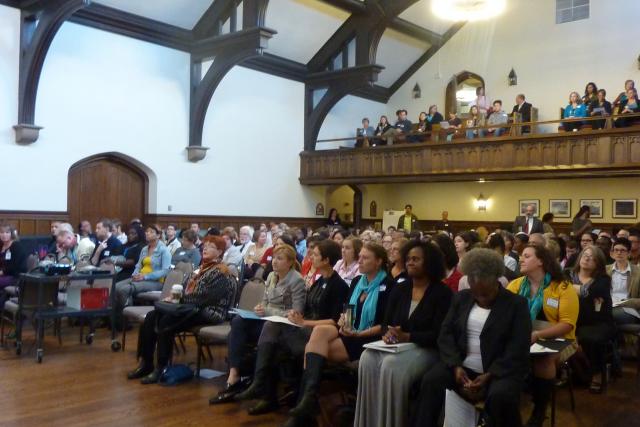 Advocates for the homeless gathered for a meeting at Plymouth Congregational Church in Minneapolis Thursday. (Photo by Matthew Ayres)

Remember as a child secretly listening in on adults’ conversations? You felt like an insider.

Well, I felt just a little like that Thursday listening in when more than 200 people from 60 agencies from Minneapolis and Hennepin County came together to brainstorm what is and isn’t working to put roofs over the heads of the homeless during economic hard times ranking just below the Great Depression.

Even with “record numbers of people in shelters’’ and still high unemployment and growing numbers of persons receiving income support like General Assistance and MFIP (Minnesota Family Investment Program) and near 2 percent housing vacancy rates, there are “bright spots,’’ reported Lisa Thornquist, acting director of the Office to End Homelessness in Minneapolis and Hennepin County.

Progress was outlined too in Heading Home Hennepin’s Five Year Report, at this the halfway mark in the city and county’s 10 year plan to end homelessness:

Yet those sunny numbers aren’t enough.

“You don’t see people content with where things are. We want to move forward, even with limited resources,’’ says Matthew Ayres with the Office to End Homelessness.

Then I listened in on what those in the trenches, the people who work to prevent and solve homelessness, had both to recommend and to praise.

In breakout sessions at Plymouth Congregational Church in Minneapolis, they called for more supportive services for youths 12 to 24, including year-round youth employment and mental health services, especially for those coming out of correctional facilities.

They see other gaps in service as well, including a lack of housing for chronic inebriated women, safe, congregated housing for very young moms, reliable language translators.

There is great need for resources for the undocumented including mental health care, as well trauma counseling for refugees. Yet, as one participant offered: in today’s Tea Party environment, it’s hard to advocate for people without the legal papers to be in this country.

There were calls for more coordinated efforts and a better communication system among all those housing programs.

In the Anoka-Hennepin school district, for instance, more than 700 students have been fed through emergency food shelf programs in the schools. A new Outward Bound program through Youth Link is teaching leadership as well as self confidence. A life-coach mentoring program through the county is teaching realistic goal-setting.

People Serving People is providing programming for isolated, stressed and bored 12- to 17-year-olds.

Catholic Charities runs a program that teaches people accustomed to living on the streets or in shelters how to be good tenants.

After several hours of discussion, participants headed back to their clients and the Office to End Homelessness staff talked about what comes next. Clearly, Ayres says, there is need for continued conversation, and there will be.