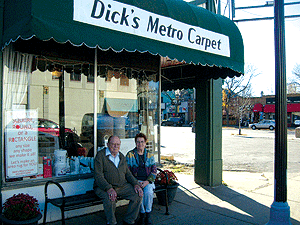 Dick’s Metropolitan Carpet is moving off the corner. Dick and Dorothy Pitheon have been running their business on the corner of 48th and Chicago since 1978. They started at 4737 Chicago and then in 2002 they moved around the corner to 809 East 48th Street. They’re moving on Nov. 15 to a new location at 5611 Chicago Ave.

They’ll be having an Open House at their new location from Dec. 11 to 15 with holiday cheer to show their new showroom and new colors. There could be a visit from Mr. and Mrs. Claus, and there will be a drawing for a holiday rug.

Dick Pitheon has lived in South Minneapolis all his 80 years. He graduated from Central High School in 1950. He and Dorothy raised five kids in the Powderhorn neighborhood, and the kids all went to Bancroft Elementary, Folwell Junior High and Central High School.

Dick is one of those unsung, everyday heroes who cares enough about their community to go to neighborhood meetings and participate in the decision-making that can make the difference between the life or death of a community.

He worked with the Model Cities program. He was on the board of the Powderhorn Park Neighborhood Association, and he was president of the nonprofit Powderhorn Community Council when it was responsible for building low-income housing and renovating many homes in South Minneapolis.

He got into the carpet business after an unsuccessful run for City Council in 1971. Once he opened the store on 48th and Chicago he became active in the South Chicago Avenue Business Association and was helpful in solving zoning problems and working with the red tape that comes with government agencies.

He organized the effort to get more parking on the corner, and he was responsible for getting the decorative street lighting for 48th and Chicago that was imitated in other business districts in Minneapolis. He personally worked with then Representative Janet Clark and Governor Al Quie to get a branch banking bill passed through the legislature that allowed major banks to open branch offices in neighborhoods. As a result of that effort, the neighborhood now has two branch offices, which is a great convenience for businesses and residents.