Hans Weyandt—who has co-owned Micawber’s with Tom Bielenberg since 2003— is quitting the book business to stay home and care for his three sons as his wife, a pediatric nurse practitioner at Children’s Hospitals and Clinics, takes on a new position.

The father of boys ages 6, soon-to-be-4 and 16 months, Weyandt said he’s had many men—especially older men—say they wish they would have done what he is about to do. And despite the prospect of spending more time with dad, Weyandt’s eldest, Elliott, isn’t happy that he will no longer be allowed to roam the stacks at Micawber’s—a place that’s been a part of his life from the beginning—and take a book home with him at whim.

Bielenberg, who will now be sole proprietor of the store, said the last 10 years working with Weyandt has been a great business partnership.

“I will miss him terribly,” Bielenberg said, “and I am sorry to see him go. It’s been a great run.”

Micawber’s has been a fixture in St. Anthony Park since 1972. Bielenberg and Weyandt, who met while working at the now-defunct Hungry Mind on Grand Avenue in St. Paul, bought the store from Norton Stillman, publisher of Nodin Press, who had owned it for 31 years.

In the last decade, Micawber’s has increased the number of book events at the store. Weyandt said it’s hard for him to choose a favorite of all the events, but two that come to mind are the event for Michael Dregni’s book on Django Reinhardt with live gypsy jazz (“We way exceeded fire code on that one.”) and Kevin Barry, an Irish writer who read there just last fall.

“He was the best reader I’ve seen in person,” Weyandt said. “We’ve had a lot of fun panels and groups, and I’ve always enjoyed events that were a little different.” 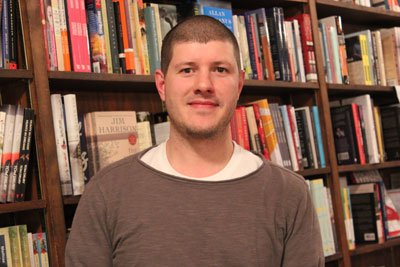 Will Weyandt return to the book business down the road? “I don’t know what is going to happen going forward,” he said. “I’m not going to say yes or no,” but he concedes he might get roped into the occasional book event around town.

After 10 years of hand selling books in Milton Square, we asked Weyandt if there was one book that stood out: “The Late Homecomer [by Kao Kalia Yang] is the one book we’ve sold the most of over time.” It’s a great book about St. Paul and Minnesota, Weyandt said, and the first book written by a Hmong author for adults.

Weyandt is hard-pressed to say what specifically he will miss about his days on Carter Avenue. “Every day is totally different, which is fun. I know a lot of the people here,” he said.

On leaving Micawber’s: “It’s a good thing, but it’s weird.”

We agree: the community is going to miss him.