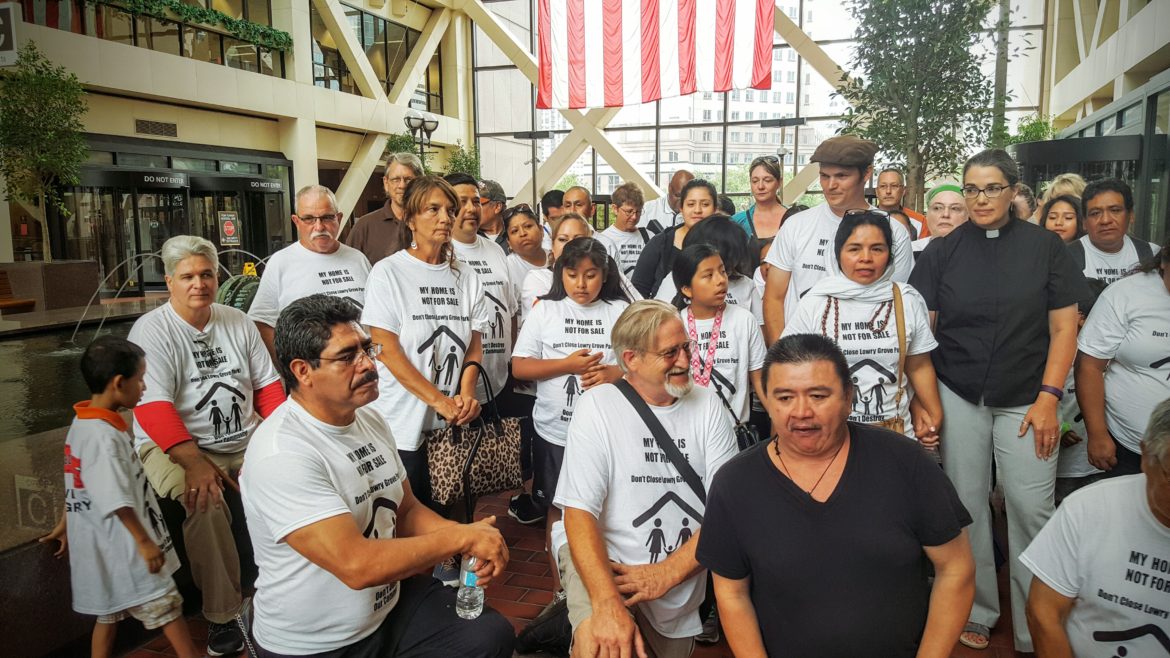 Residents gather in the atrium of the Hennepin County Government Center before heading to their court hearing on Aug. 26, 2016. Photo by Cirienn Saadeh.

Chanting a reverberating “Si Se Puede,” residents of the Lowry Grove manufactured home community marched five miles from their homes in the city of St. Anthony to the Hennepin County Government Center for their Aug. 26 court hearing. They were led by Antonia Alvarez, a barefoot and praying 10-year resident of Lowry Grove, co-founder of La Asamblea de Derechos Civiles, and President of the Lowry Grove Resident Association.

As a result of an earlier planning meeting, Lowry Grove residents are suing Continental Property Group (CPG) and their partners in a bid to save their homes under the right of first refusal, an untested piece of state legislation that would grant the owners of manufactured homes the opportunity to challenge sales of their communities by purchasing the land themselves. It is that lawsuit that has the attention of the Office of the State Attorney General. Residents and their allies believe has the potential to change Minnesota state law when it comes to affordable housing in manufactured home communities.

Of those who marched, only several dozen were allowed into the nearly three-hour hearing, while 50 or so people – including senior citizens and young children – waited in the hallway. Inside, lawyers for both sides spoke on several motions and answered questions from Judge Joseph Klein, who also noted he had also heard from the Office of the Attorney General Lori Swanson.

Nearly a month before the court hearing, the Attorney General had submitted a “friend-of-the-court” brief noting their particular interest in this case and the legislation guiding this case, which has gone untested since it was passed in 1991. According to a letter from the Attorney General’s office, they are in support of the residents and have offered their own interpretation of the legislation to the judge.

Three motions were presented before the judge focusing on specific elements of the Right of First Refusal legislation and the actual right of the residents to buy the park. At one point, the arguments between the residents’ lawyer Jack Cann and the lawyers for CPG and their partners came down to a simple grammatical notion: the placement of a comma in the original legislation. The impact that comma could change the understanding and implementing the law.

“We asked the court for a judgment that the owners had violated the law by rejecting the right of first refusal,” said Cann to a gathering of Lowry Grove residents and allies. “The best outcome is he grants our motion, the worst outcome is we have to keep this lawsuit going.”

“We are not defeated. We still continue to organize. We need to denounce the corporations about their lies and their hypocrisy when they say that they follow the law. But when those laws go against the people, those laws need to be broken. We have not lost. We continue in the fight,” said Alvarez, in Spanish, to the mostly Latinx residents.

Traci Tomas, president of CPG, said that despite the active litigation, CPG and their partners are continuing to move forward with development. The company submitted a proposal to the St. Anthony City Council on Aug. 26 regarding their future plans for Lowry Grove once the homes have been moved or demolished. Residents, however, continue to fight on.

“We are not moving. We continue to stand up for our homes, our families, and communities,” said Ned Moore, Development Director with La Asamblea de Derechos Civiles, following the Aug. 26 court hearing.

The judge has yet to make a decision regarding the outcomes of the court hearing and no timeline has been set for when that decision will be made.

Two weeks after the court hearing, residents marched again. Armed with signs that read “Just Because We Have Mobile Homes Doesn’t Mean We Have to Move” and “Black, Brown, Yellow or White, that is Lowry Grove,” amongst others. Residents of Lowry Grove once again chanted and prayed on their way to the St. Anthony city hall Thursday night.

While residents were prepared to share testimonies about why they were fighting to save their community, it was a letter from the Minnesota Housing Finance Agency (MHFA) that provided their ray of hope.

“We are concerned about the various logistical challenges that arise when the validity of a manufactured home park closure is the subject of active litigation,” read the letter from MHFA.

According to a small loophole in state law, residents of the Lowry Grove manufactured home community cannot be forced to leave their homes quite yet, because of the litigation. It was the “hail mary” and the “miracle” they were looking for.

“We were pushing for this to happen today, but we did not know this was going to happen. This was a miracle,” Alvarez said.

Residents found out that the park was to be sold in April. Working with AEON, a non-profit affordable housing developer, residents were able to raise the money to purchase the park themselves in time for the June deadline under the right of first refusal. However, the former owner denied their purchase request, selling the park to CPG. The residents and AEON then filed a lawsuit against CPG and their partners.

It was that lawsuit that is now holding up the continued development of Lowry Grove, and that has activated the loophole.

State law requires that residents have 9 months to vacate once they are warned of the impending closure of a manufactured home community, which usually includes a public hearing and a 60-day period after the public hearing concludes. Residents had previously been given until February 2017 after the park’s contested sale to CPG in June 2016.

However, in a letter sent by the MHFA to the St. Anthony City Council this past week, it was noted that if the public hearing actually closed that night, it would trigger the activation of the Minnesota Manufactured Home Relocation Trust (“Fund”), which could only be activated if a park was truly closing. Because of the residents’ lawsuit against the current owners, it is not yet clear whether or not the park will actually be closing and when that would happen if it does close.

“This is one more, at least modest, roadblock,” said Jack Cann, the resident’s lawyer and a senior attorney with the Housing Justice Center. Cann believes that while this is a small roadblock, it is one that CPG and their partners would like to see overturned.

“I am concerned about the residents. This creates more limbo for them, not knowing what is going to happen. I just think it is going to cause some confusion for them,” Tomas said.

Park residents, however, argue it is the development occurring at the park that has people stressed. According to Zappa, seven homes have been demolished and three homes have been moved. While she and other residents are looking for housing elsewhere, as a “Plan B,” they remain committed to saving Lowry Grove and have no plans to leave any time soon.

“I am ecstatic. I do not want to move. We just got a ‘Hail Mary,’ and it came from the state, something we didn’t expect it to come from,” Zappa said.

In the meantime, Cann said residents are also filing a HUD discrimination complaint against CPG and their partners.