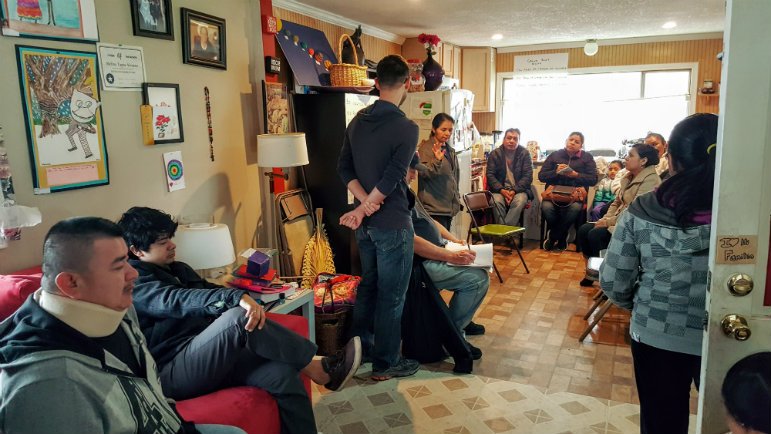 Lowry Grove residents and allies gather in Antonia Alvarez's home to save their homes. Photo by Cirien Saadeh.

The walls of Antonia Alvarez’s home are covered in her children’s awards, school projects and artwork, alongside old family photos. Her kitchen table has been a planning and gathering space for dozens of protests, rallies, and meetings in the fight for immigrant justice.

During an early morning meeting on April 29, 20 residents and friends of the Lowry Grove manufactured home community, where Alvarez and many others live, gathered at that kitchen table as they plan and work to save their homes. Last week, the owners of the park announced that Lowry Grove will be sold to Continental Property Group (CPG).

However, residents are not going down without a fight.

“We won’t be defeated until the last minute, and we’ll decide what the last minute is,” Alvarez said. Alvarez is co-founder of La Asamblea de Derechos Civiles, a Latino immigrant justice organization.

At the April 29 meeting, residents gathered to discuss their organizing options, trying to make sure they are compensated fairly if the park is sold, maybe buying the park as a community and running it cooperatively with the support of St. Anthony Village, or ensuring that CPG does not develop on the park property if they do buy the park.

“We don’t care if [CPG] buys it as long as [they] don’t take away our homes,” Alvarez said.

In order for the residents to buy the park themselves, they would have to come up with $6 million of financing needed to counter CPG’s offer. The contract finalizing the park’s sale is expected to be signed June 11.

According to Lowry Grove’s managing partner Phil Johnson, managing the park has become more difficult in recent years due to its aging infrastructure.

In a letter to the residents, Johnson said, “The management and operation of Lowry Grove has become more demanding in recent years, with infrastructure, including water, sewer, electric and roads, now over 70 years old. The park no longer meets the standards of modern manufactured home communities.”

Traci Tomas, president of CPG and a former employee at Lowry Grove, said the company’s plans for the property are residential and include some affordable housing options.

However, Alvarez argues that the park is their home, and they should not feel this uncertainty about where they will be living in the near future.

“The question is, you have your family, your children, would you like someone else making a decision for you about where you can live? They are making decisions about my family, my future. We live in Lowry Grove park. Our life is there,” Alvarez said.

Residents are concerned that despite owning their homes, they will lose them due to the sale of the park. Most of the manufactured homes at Lowry Grove cannot be easily moved.

Tomas noted that the current owners of Lowry Grove have been trying to sell the property since she worked there ten years ago.

During Saturday’s meeting, residents shared their frustrations with this lack of transparency.

Residents at the meeting stated that their greatest concerns with the sale of the park are the safety and security of their families, as well as dignity and respect for park residents.

“There is no way you can compensate for the loss of a neighborhood of a hundred families,” said Ned Moore, Development Director with La Asamblea de Derechos Civiles.

Lowry Grove residents and allies visited Tomas’ office in Wayzata, as well as the office of Sen. Al Franken, during a Monday meeting.

Tomas was not scheduled to meet with them, but she attended after much urging and phone calls from friends and residents. Residents met with Tomas for 30 minutes to share their testimonies.

“The results of yesterday’s meeting was that Tomas, for first time, heard from residents of Lowry Grove about the challenges they would face: having to transfer their children outside of their schools, losing their homes, the loss of the community,” Moore said.

On May 9, CPG has a meeting scheduled to discuss the options and compensation available to residents on a group and case-by-case basis. Residents have been told they will be receiving anywhere between $2,000 and $10,000 compensation for their home. However, during the Monday meeting with Tomas, one resident noted he purchased his manufactured home for $8,000 and renovated it for another $15,000. Tomas also said that they will have a hotline and other information available for residents as they work through this “transition period.”

On May 10, residents and organizers plan on attending the the St. Anthony Village city council meeting to ask for their support in their organizing. They also plan to continue meeting as they work to save the park.

“The plan is for them to let us live in this park,” Alvarez said.

However, Alvarez also urges more of the park’s white residents to step up. As of now, the majority of residents fighting to save the park are Latino.

“The Latinos want to fight this because we don’t have another choice,” she said