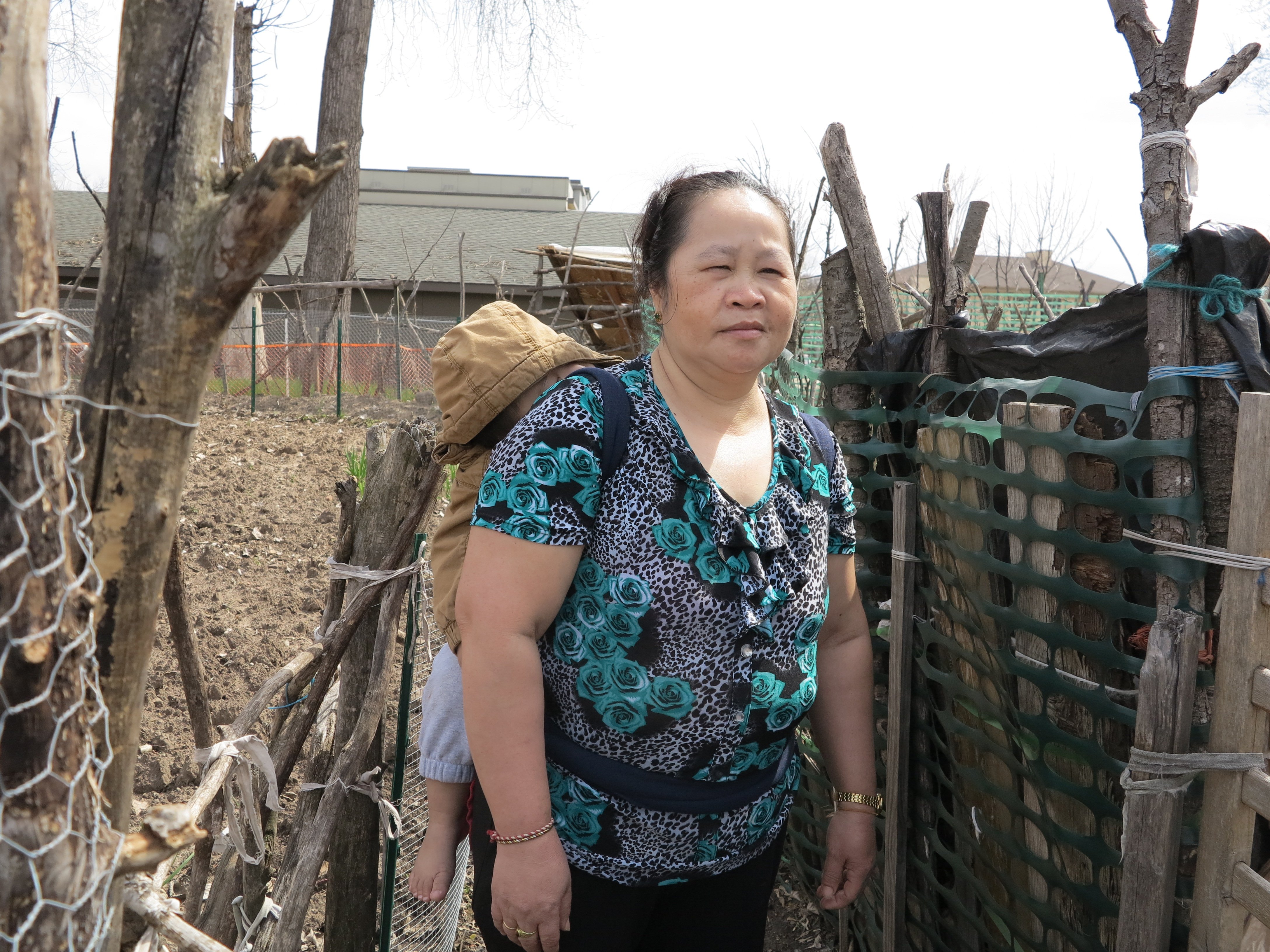 “Whenever my kids go to school and I have nothing to do, I will stop by and take care these (vegetables)“ Wang Tong Thao says. Thao is a 61-year-old Hmong resident on the East Side of St. Paul. He started participating in the community garden program in District 2 in 2007, right after he moved to this neighborhood in 2006. When he was asked if he would like to sign up for this program, he felt it would be a great way to grow some vegetables that he couldn’t find in the local grocery stores.

“Mostly, green onions, chili peppers, bell peppers, some green and purple eggplants… And I get the seeds from Hmong farmers’ market.” He tries to add something different each year in the plot so his family can have a variety of dishes on the dinner table.

“This is our oldest garden,” said Beau Ku Vang. “It started where a place people kind of just dump things. It’s owned by Armory and then the army leased out to District 2 Community Council to manage. The original gardeners were the ones who cleaned up the area and did the plots.” Vang is a project manager from North East Neighborhoods Development Corporation, which is a sister organization with District 2.

“We don’t really have a source of water here so they would usually bring a bucket of water from home and carry it to their plots.” Vang explains the system in Phalen Village Community Garden. Each gardener pays $10 for the maintenance fee per year, which covers the postage, a key to the community garden fence door, some amount of liability insurance and the maintenance of the soil. Another community garden on north Maryland Avenue has a water supply from the water department, so that garden charges $20 for each gardener.

This year, starting on April 30, District 2 Community Council held a two-day community meeting for local residents to sign up for the community garden. According to Sue McCall, the block club coordinator from District 2 Community Council, there are 125 plots and usually each year there would be 10 to 20 people on the waiting list for the plots. “Some people have gardened at the same plot for 20 years… and there is certain a sense of ownership,” McCall said.

Wang Tong Thao thinks one of the benefits of gardening is that during the summer when everything is growing, he would be able to use these vegetables to make lunch or dinner instead of taking his own money to buy it in grocery store. “A lot of times, chili peppers or stuff like that could be stored in freezer and used in winter,” he said.

Blia Xiong, who moved to this neighborhood about three years ago and has been gardening for two years, plans to grow some long beans and other vegetables as well this year. She said, “It’s a good program. It’s nice that it’s close by and I can come to the garden and pick up the vegetables.” When her family first moved to District 2, a neighbor let her take the plot and she has been planting since then.

Vang thinks it’s a good opportunity for local Hmong residents to be able to garden, since many of them don’t have other land available. “Because they live close by here and it’s easy access for them… it gives the access to them to go out meet their neighbors… so it’s a unique cultural stand point.”

“We are hoping to expand our gardening program,” McCall said. “It’s a refugee population and they have not had a easy life… there are some isolations there and gardening helps hugely with that.”