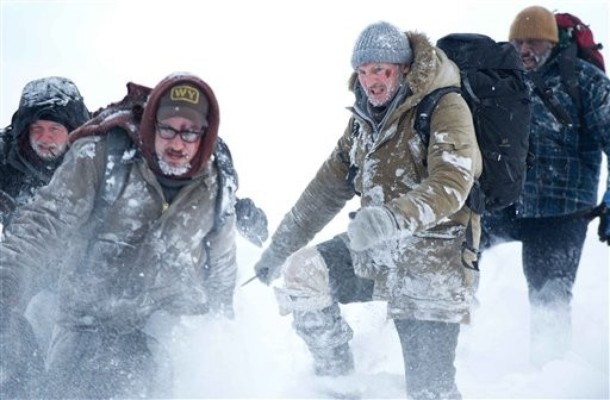 The wolf is beautiful. At least modern society thinks so. Today, we adore the wolf and see it as a symbol of freedom and adventure. The wolf is pictured as a durable, tough creature in illustrations and novels. Throw anything at it, and the wolf will overcome; it is, in a literal sense, the underdog.

Wolves play a vital role in director Joe Carnahan’s action drama, “The Grey,” and let me tell you, they are definitely not underdogs. They instead are bloodthirsty antagonists that force the plot forward with ruthless exertion. Many things that happen in Carnahan’s film are ruthless, to the point where my blood drained from my face at the sight of them. Blood. That’s another dominating element of “The Grey.” Ruthless predators and bloody encounters combine with skillful acting and a flawless script to make “The Grey” a masterful reflection on survival.

Ottway (Liam Neeson) is working as a hired hand in the harsh wilderness of Alaska. His job: look for and shoot any wolves that threaten oil drillers. When we first meet Ottway, he is depressed. He has reoccurring flashbacks to a woman he is no longer with. Bags rest under his tired, sad eyes. Alone outside a bar, he puts a gun barrel in his mouth. Any day could be the one where Ottway extinguishes his own existence.

Ottway’s flirtation with death is rocked on a plane flight to Anchorage. The plane, holding Ottway and a team of drillers, crashes against the ground going 400 miles an hour. The scene where the plane takes damage and goes down is effectively scary. I felt claustrophobic as the camera shook, the cabin plunged into darkness, and seatbelts were rapidly clicked into place and pulled tight. It’s the scariest airplane scene since “Final Destination” (2000).

Fortunately, Ottway and six other men survive the accident. Unfortunately, they crashed in the center of flat snow plains that are battered by stinging winds that made my cheeks red just watching it. Nourishment amounts to almost no food and a cabinet of liquor. It isn’t long before Ottway and his companions find that starvation isn’t the worst of their problems. That title goes to the pack of wolves circling them. You see, they crashed in the radius of the wolves’ den, and invading a wolf’s territory will drive it to kill. So begins a race to the tree line and hopefully civilization for the small band of survivors, with the panting hounds hot on their heels.

Written by Joe Carnahan and Ian Mackenzie Jeffers, the script is balanced, entertaining, and thought-provoking. In between the action scenes, the writers allow time for conversations and character development. It was refreshing to see oil drillers, the outcasts of society, discuss topics such as family, religion, women, and death. This dialogue plays a key role in the eventual bonding between the survivors. And everyone is given the opportunity to speak and show viewers that they are more than just victims waiting to get knocked off. Characters grow and then are viciously torn apart by wolf canines. Each time somebody was killed, I felt a pang of loss. I was saddened because I wouldn’t get to see that man again.

The actors bring this dialogue to life with colorful characterizations. Neeson is spellbinding. He’s not the self-assured badass from “Taken” (2008), but instead makes mistakes and admits that he’s scared out of his mind. He feels fear, but uses it to drive forward, to do everything in his power to keep the group alive. Neeson snarls right back at the wolves and creates intriguing weaponry to fight them with.

Starring opposite Neeson as the guy who doesn’t want to follow orders, Frank Grillo steals scenes with his manic acting. As Diaz, a former prison inmate, Grillo was originally a guy I disliked due to his lazy attitude and selfishness. As more time ticked off the clock, however, I found I couldn’t get enough of him. His character went through a drastic transformation, and along the way he ranted and raved in a way that made me straighten up and take notice. I was glad to see his stereotypical role progress into something unpredictable.

As the trackers of the beloved humans, the wolves are fierce, uncompromising creatures of malevolence. When they strike, it is with fast, brutal efficiency. Their teeth rip into guts, maw on cheeks, and clamp on legs. Every time they attack they go for the kill. Whenever I saw a wolf, or heard a wolf, my heart began thumping at a faster rate, because I knew they meant business. When the wolves are depicted through digital animation, it’s convincing and not fake in the slightest.

I give “The Grey” five stars out of five, an A+. “The Grey” is rated R for violence/disturbing content including bloody images, and for pervasive language. It has a running time of 1 hour and 57 minutes and was released nationwide on Jan. 27, 2012.