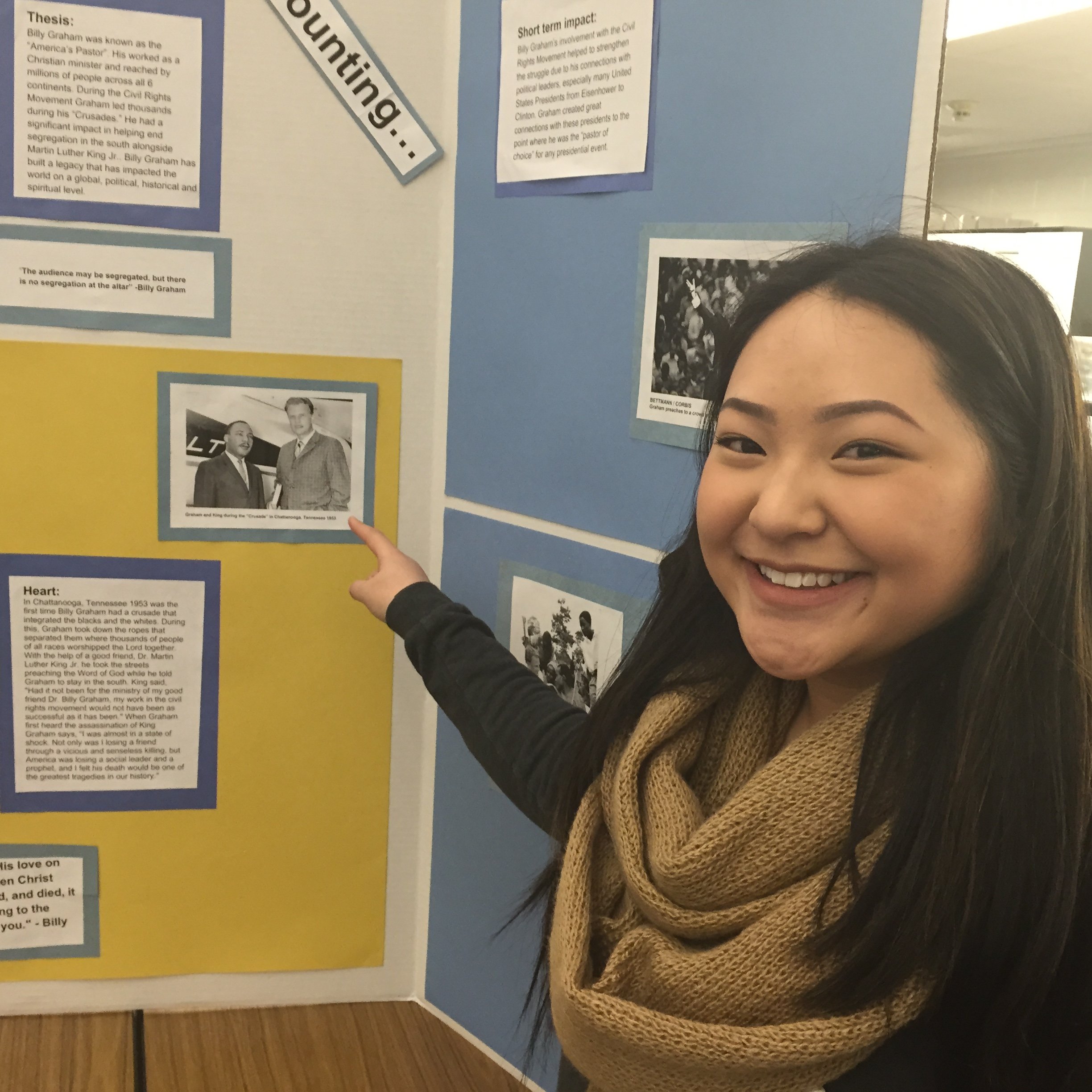 The friendship of Dr. Martin Luther King Jr. and evangelist Billy Graham was just one of many unexpected things I learned about at a recent terrific Minnesota History Day celebration at at Harding, a St. Paul district high school. For people interested in youngsters, schools and learning with four or five hours to share, helping judge a History Day event is a great gift – to students and to yourself.

Among the things I learned from Harding Senior High School students’ History Day projects were that:

–Graham strongly supported King’s efforts beginning in 1955. Even before King’s work with the Montgomery bus boycott, Graham had insisted on allowing black and white people to sit together at a 1953 program.  Among things, Graham invited King to speak at some of his crusades, and paid his bail so that he could be released from jail. Harding junior Julie Vue points above to a picture of these two that was part of her project.

–The U.S. had a female spy during World War II who had considerable success discovering Soviet plans.

–The rap musician Tupac Shakur sold more than 75 million records worldwide and was one of the first to bring political issues to rap music.

–Pine Ridge Reservation Tribal Chair Dick Wilson was extremely controversial and, to some, ruled almost like a dictator.

–Genghis Khan was more complicated than the fearsome, brutal person that some accounts offer. (This information came from a fascinating presentation by a student who pretended that she was a child who met Khan, was awed and decided to learn more about him.)

That’s a small sample of the various subjects that Harding students studied in producing their History Day projects on this year’s theme, “Leadership and Legacy.” Some students created posters, and some produced websites, wrote research papers or made dramatic presentations.

Not surprisingly, the quality of the projects varied. Some youngsters, whether individually or in a small group, devoted many hours to their projects. Others acknowledged that it had been mostly done in the last week or so before the event.

When asked what they were proudest of, many students responded, “I (or we) completed it on time.” Learning to set a goal, work toward it and complete it are extremely valuable life skills.

Back to judging. No, you don’t have to be a history expert. You do need to be willing to listen, learn and give young people feedback. Sometimes there was a big smile and a strong handshake and other times just a small, shy smile. But every youngster seemed to appreciate feedback.  And having community members look at their work helps show students that people care about what they are doing and learning.  It’s a great way to support students and educators.

Judging will take a few hours on one day. But it’s not an ongoing commitment, just one day. You’ll need to ask a few questions of youngsters, listen carefully and write down their answers.

I spent about five hours at the Harding’s History Day event. Molly Keenan, a teacher in the Harding Social Studies Department, and her colleagues did a marvelous job of organizing the day.

Jessica Hobson of the state Minnesota History Day contest told me they always need judges. There are regional contests all over the state. You can find out more information here: http://bit.ly/1wArM2X.

Judging is a great way to learn and give as you help young people grow.