After an unexpected hiatus, the Graph of the Day is back! Apologies to all who missed their daily data dose.

We’ll return to income inequality at some point in the future, but today’s graph takes another look at jobs. In the comments of a previous GotD, someone posted a conservative charge that half of the country isn’t working. In actuality, participation in the labor force is only slightly below long-term trends. Let’s go to the graph. 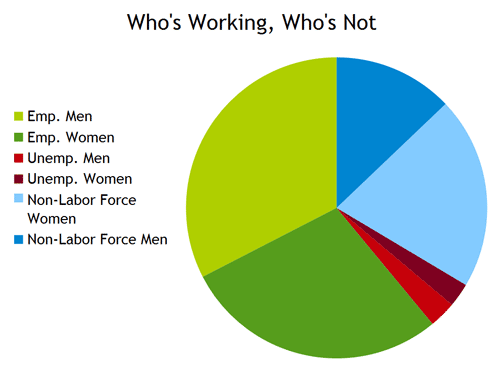 (Data for October, 2011 from the Bureau of Labor Statistics)

The chart has three major groups: green for the employed, red for the unemployed, and blue for those not in the labor force. This is where conservatives play word games, so some definitions and context are in order.

All of the numbers here relate to adults 20 years of age or older. The population of 16-19 year-olds is often included in total employment estimates, but teenagers’ legitimate reasons for not pursuing work introduce misleading skew.

These also figures do not include the military, nor do they include those in prison, a mental facility, a home for the aged, or similar institutions. The official term for what’s left is the civilian noninstitutional population.

This population is divided between those in the labor force and those not in the labor force. The labor force is the group of people who have sought work in the last 4 weeks, and it expands and contracts within a fairly limited range. The national participation rate over the last ten years ranges from 64% to 67%.

In a future graph, I’ll go into more detail about nonparticipation in the labor market. For now, however, let us acknowledge that two-thirds of adults in this country are seeking work and that many who are not seeking work have legitimate reasons not to do so. We must challenge those who hurl undeserved blame at their fellow citizens.