The Abiders gig at The Mainstreet Bar in Hopkins in February. The Mound-based blues band says that “If ain’t fun, we ain’t doing it.”

On sun-washed, Saturday May 9, the good people of Minneapolis are discovering the emerging greens and gentle breezes of spring and the soft serves at Dairy Queen. Through late afternoon, scents of lilac and freshly mowed lawn and bird song greet folks out for a neighborhood walk or a spin around their chain of lakes.

I, however, am hanging out in The Golden Leaf, a tobacco and cigar sampling store on Lake Street near Bryant Avenue. I’m perched on a bar stool near a large, walk-in humidor and have a decent view of the Twins/Indians game on a flat screen TV. A helpful attendant has selected a handmade Dominican cigar for me. The stick is mild, flavorful and slow burning. I am appreciative. I have two hours to kill before heading west to a restaurant in Mound to hear The Abiders, a blues band made up of suburban types.

With the Twins victory, I shift to an alcove of comfortable armchairs and divans. The remainder of my interim will be spent in the Golden Leaf’s spacious, lodge-like lounge with the collegial banter of its diverse patrons and simply gazing out its large, storefront windows at Lake Street.

The 20 something guy opposite me is bunkered with several real books, a dormant laptop and a hand-rolled cigar. He is absorbed in a thick volume, perhaps a novel; a rogue antiquarian thriving without an iPhone and the app of the moment.

He reads while a stream of bossa novas and then Luiz Bonfa’s “Samba D’Orpheo” dance from the floor speakers. The cool comes courtesy of a nationally syndicated program called “Radio Deluxe” via KBEM-FM, our only jazz station. I fix on the Brazilian music and take measure of the passing fashions out on the sidewalk. The two whimsically merge into street theater. 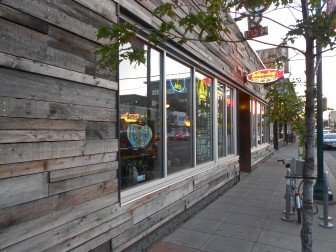 So, I have a damned good cigar in my paw, I’m fantasizing about Ipanema and reconnecting to my former Manhattan life via my fave radio station. If this is heaven, so be it.

An amiable Golden Leaf regular with his signature Yankees cap glued to his bean, claims real estate on my bench as the book reader and another cigar cognoscenti talk about Stanley Kubrick. This leads to a four way exchange about screen plays, A Rod, Torii Hunter and premium stogies. I wonder how a blues band with a Mound zip code could fit into the cosmopolitan drift.

Not long ago, Mound was mostly a working class town set among the western bays of Lake Minnetonka. The freshwater sea’s irregular, wooded shorelines and peninsulas have largely been manicured into pleasant, garden hamlets; Carmel and The Hamptons have equivalents here. Wanna-be poseurs can be coddled with valet parking at the wine bars and marinas of Wayzata and Excelsior, but Joe and Peg Paycheck eye the menu specials at Cattails Kitchen and Cocktails. It’s the venue for The Abiders and it’s in Mound.

The steak, seafood and burger tavern on Commerce Boulevard seems to have been named for the shallows behind it. Boaters from Minnetonka’s Cooks Bay can take a navigation channel through the reeds – Lost Lake – to a City of Mound marina with free docking slips. Cattails is a ten-minute walk from the pier.

But I drive and claim one of many empty tables as the blues band that I’ve come to hear riffs through a zippy tune called “Mango Tree.” Lead singer Julie Wiesenhorn and harmonica wailin’ Karlos Von Veisenhorn instantly zap my doubts.

“Mango Tree,” it turns out, is written by Julie and lead guitarist Doug Molland. The core of the band also includes Ricky Dean Anderson and his partner-of-choice, an up-right, acoustic bass fiddle. They are joined by top shelf steel guitar man Andy Dee and ace percussionist John “A Frame” Beck; the latter is pinch hitting for regular drummer John Haga. 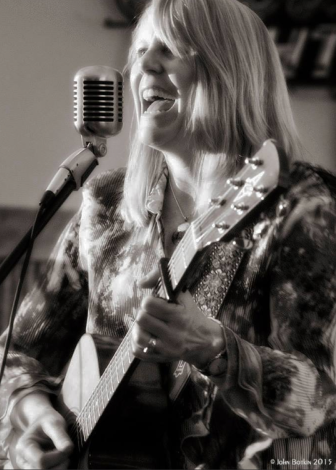 The Abiders’ lead singer Julie Wiesenhorn at Cattails and Cocktails, May 9, 2015

As their set develops, Julie’s vocals (think Bonnie Raitt with Stephen Stills shading), combine with tight chord progressions, rhythmic momentum and quivers of virtuosity to propel “Make a Change,” “Moanin’ the Blues,” and “Ever Lovin’ Shame” (also by Julie and Doug) into, say, the new sound track of my life (at least for the evening). Good-bye Sondheim. I’m smiling broadly. So too is an elderly couple at the next table.

In our texting, selfie snapping, mobile phoning nation, the new, multi-tasking norm for live music venues includes flat screen TVs cluttered with sports and Netflix. Just now, The Abiders are having to perform alongside an Iowa-sized screen pulsing with a NASCAR race and a bunch of guys wearing neckties telling us about it. The sound is turned down, but I’m thinking, get real America.

I am ready to scold the management, but leash myself and tell an attentive server that it’s time for me to learn about the chef’s Whisky Burgers. I tack sweet potato fries and a glass of orange juice and tonic onto the order. I explain to her that the quinine in the tonic would temper any malaria I might have picked up on the African Queen adding that I consider Charlie Allnut a role model. She smiled but did not understand.

I figure Karlos would. He sports an Indiana Jones broad brim and the rakish grin of a guy who is always two steps ahead of the sheriff. I figure the dude knows stuff. So too, Doug Molland who wears a flat, tweed cap and is from Liverpool. We talk some during a break about the separatist movement in Scotland. I’ve heard his accent in U.K. pubs that I’d never tell my wife about, but on stage he’s one with Chicago, Mussel Shoals and Kansas City.

The senior marrieds nearby seem content with not talking to one another. In this, they’ve clearly had decades of practice and are very Minnesotan. So am I, but talk to them. After politely rowing through the buoys that guide Minnesota small talk, we come to agree that NASCAR was being creamed by The Abiders and that the texters and chatterboxes around us are barbarian.

The Abiders don’t seem to mind. They have a been-through-a-lot charisma that injects the night’s gig with appealing honesty from I’ve-been-cheated-on blues to slaphappy rockabilly. The tables are filling up and they are having fun.

Ricky Dean Anderson is a case in point. The sad-eyed, sphinx of the group has been making mad, happy love with his bass fiddle but has been vocally mute – I figure clinical shyness or something.

Sweet Jesus, I couldn’t have been more wrong. About seven songs into the first set, The Abiders move into what I later learn is a Lee Emerson, honky-tonk blues standard called “Start All Over.”

Cue the bass man:
Well I hope that I don’t never
Lay eyes on you again. …

Ricky Dean’s baritone has more vinegar and dance in it then any of the stiff Brylcreem and string-tie cowboys that twanged on black & white TV and AM radio when I was a teenager.

My best advice to you,
Go back where you began
And Start all over …

I’m thinking life is sweet when it makes time on the same day for a good cigar, sambas, Tony B, a Whisky Burger and The Abiders.

Doug Molland’s gritty rasp on “Going Away Baby” is a rusted Dodge pick-up heading north from an affair going south and Julie Weisenhorn’s “Kokomo Blues” is a firm bourbon that redefines happy hour. It begins with sorrowful guitar slides and then gains energy and tempo as Karlos dervishly tweaks audio levels on a mixer.

Cue the blond:
When you get home baby
Write me a few of your lines …

Karlos’s blues harp slides in with reedy bends and double stops. They sail …

We know this woman and clearly some of the ladies in the house have even been her. But for the life of me, I can’t figure out what “kokomo” means except for thinking it may be metaphor.

The Abiders, who claim that “If it ain’t fun, we ain’t doin’ it,” are on Facebook and perform throughout the metro area and travel well beyond. Their single CD is titled “Designated Rider.” Their next gig is on August 13 at The Narrows Saloon in Navarre – smack between Minnetonka’s Lower and Upper Lakes.

Jeff Strate is an independent television producer and writer based in the Twin Cities.