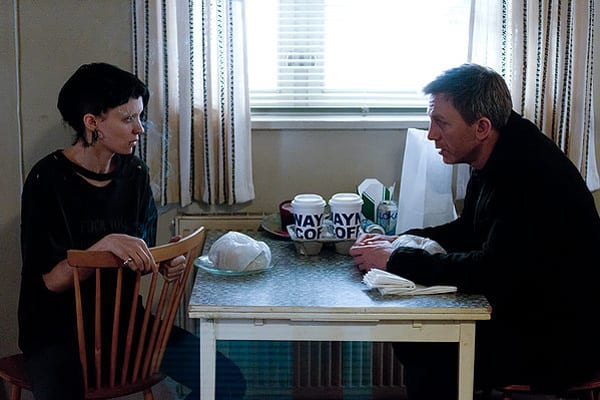 A serial killer knocks off his victims in the fashion of the seven deadly sins. A female space warrior tries to stop a ruthless alien species from ripping her to shreds. A college student uses the Internet and his coding abilities to become a billionaire, but loses friends and makes enemies along the way.

These diverse scenarios are plot points from a few of director David Fincher’s movies. A man who made his first splash in the movie industry with a gut-punch-type, atmospheric third “Alien” movie (1992), Fincher had heads turning with later entries like the cult hit “Fight Club” (1999) and 1995’s “Se7en,” a film that had many people saying: “You might want to cover your eyes for this part.”

After 26 years spent in the film industry as a director, Fincher hasn’t lost his touch on making bold films that are remembered long after the end credits roll. One could make a strong argument that Fincher has only gotten better with each passing year. His latest film, 2011’s “The Girl with the Dragon Tattoo,” is a great example of this hypothesis. As displayed in previous Fincher flicks, dark settings, first-rate acting, an effective musical selection, and an engrossing story combine to make “The Girl with the Dragon Tattoo” another notch on Fincher’s belt of cinematic success.

Reeling in embarrassment and financial woes after being charged with libel in a story written for “Millennium” magazine, journalist Mikael Blomkvist (Daniel Craig) is offered a peculiar shelter from his troubles by an old man named Henrik Vanger (Christopher Plummer). Henrik, the retired CEO of a powerful industrial company, lures Blomkvist to his home on Hedeby Island and offers him the job of solving a mystery for him. Henrik’s niece, Harriet, was presumably murdered on the island 40 years ago. Her body was never found. Henrik believes that someone from his family (many of whom still live on the island) killed his niece, and he wants Blomkvist to find out who did it and why. Joining Blomkvist as a research assistant is the punk-tinged computer hacker Lisbeth Salander (Rooney Mara).

As Blomkvist digs deeper into the Vanger case through interviews and good-old- fashioned book reading, the mood of his search grows darker. He realizes that the secret behind Harriet’s disappearance is soaked in violent malevolence, something he didn’t expect. You can feel Blomkvist stepping closer to some unseen danger as he draws nearer to the mystery’s solution. Fincher expertly amplifies this dread by filming scenes off the island in dark bedrooms, empty libraries, and starkly decorated conference rooms. And on the island, Blomkvist’s paranoia is pushed to the limit as he must sleep and work in a dank guesthouse that’s heated only by a fireplace. Wind and snow buffet the cottage’s creaky, wooden plank exterior throughout the movie, making you wonder if a thump heard at night is just a tree branch or a human with blood on his or her mind.

Fincher’s cast portrays their characters to their utmost potential. Craig is superb as a detective who uses his sharp journalist skills to look into the overlooked corners of Harriet’s disappearance. He creates a character that is determined and confident, yet clumsy and naïve, the latter two traits of which make him far removed from his unstoppable James Bond gig. There’s a scene near the film’s conclusion where Craig wields a knife while searching for the killer in a postmodern home. When you see Craig’s wide eyes, you can tell that his skin is crawling and his stomach is fluttering. Craig’s ability to bring out Blomkvist’s vulnerability is nothing short of remarkable.

While Craig is deliciously relatable, Mara is extremely strange as Salander. But it’s a good, can’t-tear-your-eyes-away type of strange. Wearing black leather jackets, sporting multiple piercings, and wielding various beautifully loud hair-dos, Salander is a symbol of an alternative culture. She also is quiet and doesn’t make eye contact or shake hands in business meetings. You know that something painful happened in her past to make her a social recluse; her mistrust is therefore warranted.

Rooney, whose recent film credits include “A Nightmare on Elm Street” and “The Social Network,” is a revelation in her turn as Salander. I can’t recall ever having previously seen so many layers in a film character. She displays a soft-spoken fierceness in scenes where lesser characters would curl into the feeble position. She evokes startled desperation when she’s taken advantage of. Her relationship with Blomkvist grows from icy indifference to thawed out friendship to an understandable romance. Rooney takes risks onscreen; does things that other actresses could not pull off. She shows in this movie that she’s unique.

Zaillian makes sure that these terrific performances are not wasted. His screenplay, based on Larsson’s novel, keeps things moving fast and furious. However, instead of rocketing through every frame with the speed of a Guy Ritchie movie, Zaillian will spend large portions of time in a single room if it builds character development. Though the first two hours of the script are masterful, the last thirty minutes do turn into a rushed, choppy mess that shows Salander doing interesting things with disappointingly little dialogue. I would have preferred that the movie ended much sooner after the climax.

Ah, but that is a little complaint amongst many good things. With this movie, Fincher further cements his reputation as a filmmaker who deserves to be regarded on the same level as guys like Steven Spielberg and Steven Soderbergh.

I give “The Girl with the Dragon Tattoo” four and one-half stars out of five, or an A-.

“The Girl with the Dragon Tattoo” is rated “R” for brutal violent content including rape and torture, strong sexuality, graphic nudity, and language. It was released nationwide on December 20, 2011.