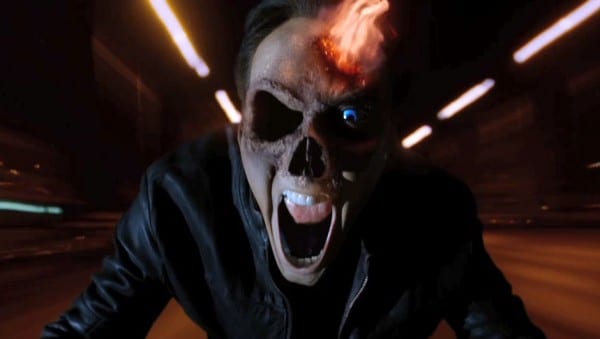 Empty eye sockets, a flaming skull, and a charred motorcycle are three reasons why you cannot mistake the Marvel anti-hero Ghost Rider with any other caped crusader. Thanks to Nicolas Cage’s portrayal of Ghost Rider, you’re likely not going to forget the character anytime soon if you find yourself in a theater catching Ghost Rider: Spirit of Vengeance. The movie is 95 minutes of mind-numbing fun. Granted, watching Cage’s latest film is a strange experience, but I think if proper time is allowed for digestion, you will find yourself remembering more good than bad in this trippy sequel.

Years after the events of Ghost Rider (2007), Cage is hopping around Eastern Europe, staying in the secluded shadows of abandoned warehouse buildings. He has come to the belief that his powers are too dangerous for him to live among others. A sound judgment, because when the demon inside him breaks out and Cage takes on the powers of the Ghost Rider, he’s apt to suck people’s souls, whether they are murderers or just illegal downloaders of music.

Not everyone has given up on him, though. Idris Elba, a French monk with a sweet tooth for wine, tracks down Cage at one of his hideouts. Elba has a proposition for Cage. He knows of a boy the devil is interested in. The winter solstice approaches, and if the boy can be obtained by the devil before the solstice, then the devil can take a new human form with unlimited power to wreak havoc on the earthly plane: your basic end of world scenario.

Elba wants Cage to be an escort for the boy until he can be handed over to his monk friends (a batch of orange robe-wearing gents with bible verses tattooed on their bodies) for an exorcism in the mountains. The incentive for Cage: if he succeeds in delivering the boy, Elba will lift Cage’s “Ghost Rider Curse.”

This Ghost Rider sequel is by no means a great movie. The screenplay, written by Scott M. Gimple, Seth Hoffman, and David S. Goyer, is kind of a mess. The action scenes don’t come around as much as they should, and the screen time in between fights is dull more often than it is intriguing.

That said; the lead performances in this movie are noteworthy in a good way. Cage is a blast to watch. He’s as unpredictable as a firecracker with an invisible wick. You never know when he’s going to blow up. In one scene Cage will be saying a dry humor joke with his signature drawl while drinking water in a diner. The next scene; Cage is frantically popping pills into his mouth before screeching a mile-a-minute at a bad guy in order to gain information. His acting borders on the schizophrenic. I admire Cage’s flexibility; he’s not afraid to do things onscreen that other actors wouldn’t dare touch.

Elba makes a great drunk with a holy agenda. He offers comic relief and gun-toting action to the plot, and proves that he has the skills to bring muscleman hero Luke Cage to the big screen, a future Marvel project.

On the bad guy side, Johnny Whitworth is a real hoot as the devil’s errand boy. He eventually gains the power to make anything he touches shrivel in decay. There’s a funny scene in which Whitworth is trying to eat a snack, but all of the food rots before he can chew it.

Despite the screenplay’s faults, the movie still has an adrenaline fueled, frenetic pace thanks to the daredevil directing duo of Mark Neveldine and Brian Taylor. These guys strap on rollerblades, grab onto motorcycles, and heft cameras while moving up to 30 mph in order to get unique shots, using a device they invented called “The Roller Dolly.” Unique camera angles from the level of motorcycle wheels are an effective addition to the gorgeous European scenery. The shaky camera is used just enough where it adds an in-your-face feel without making you want to vomit from motion sickness.

The “anything goes” atmosphere of Neveldine’s and Taylor’s Crank movies is also evident here, despite the PG-13 rating. After this movie ended, I felt like I had just witnessed the gnarly dreams of a person on mind-altering drugs, but in a good way. The Ghost Rider does all sorts of wacky things. He whispers one-liners, floats through the air like a spinning top, and pees fire. Ghost Rider isn’t taken too seriously, a good move on behalf of Neveldine and Taylor, because let’s face it: a flaming, talking skull can be a hard sell.

Is Ghost Rider: Spirit of Vengeance Oscar worthy? Hell, no. What it is instead is a race-against-the-clock thriller that is elevated above its expectations by clever cinematography and actors enjoying their time onscreen. Above all else, Cage reminds us that he is still capable of being an improvisational maniac. Now, isn’t that reason enough to pull up a chair?

I give this film three stars out of five, in other words a B-.

Ghost Rider: Spirit of Vengeance was released nationwide on February 17, 2012. This film is rated PG-13 for intense sequences of action and violence, some disturbing images, and language. This film has a running time of 1 hour and 35 minutes.