After years of controversy in Minneapolis, ending with rejection of a burning increase at the HERC garbage burner, controversy seems to be shifting to St. Paul/Ramsey County, where officials have their own incineration schemes. More below: 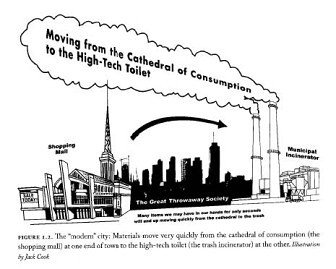 Washington and Ramsey counties are planning to spend over $26 million to buy a now-privately-owned garbage grinding facility in Newport, Minnesota. By making it a publicly owned facility they would be able to use “flow control” to force all the haulers in the two counties to bring their garbage there. An unregulated monopoly would come into being. An initial vote is scheduled for Thursday, May 28, 2015.

But this is only the tip of the iceberg of the misguided schemes of the two counties, operating through a “joint powers board” misleadingly called the “Ramsey/Washington County Resource Recovery Project.” Waste taxes (surcharges) in the two counties are already as high as 70 percent. County board members have spent the last couple of years hearing presentations from incinerator promoters, attending incinerator-industry meetings, and buying self-fulfilling reports from incineration-promoting consultants such as Foth. They have fantasies of getting their own incinerator (labeled a “gasifier” to fool citizens), or even a “trash to ethanol” plant. (Remember the stench from the ethanol-brewing scheme at the old Schmidts Brewery in St. Paul?)

What they have NOT done is significant work towards implementing “Zero Waste” approach being adopted by progressive communities around the world. They could, but are not, taking the “Ten steps toward a zero waste community” described by Dr. Paul Connett in his book “The Zero Waste Solution–Untrashing the Planet On Community at a Time.”

How can this be turned around? Only by activated citizens calling for a different approach. Below is contact information for relevant elected officials. PLEASE take action. The message is simple:
“DON’T buy the Newport garbage grinder. DO shift your focus to “Zero Waste.”

Finally, bad advice from the “Pollution Control Agency” is a key problem. See this post: http://www.alanmuller.com/garbage-in-the-minnesota-legislature/