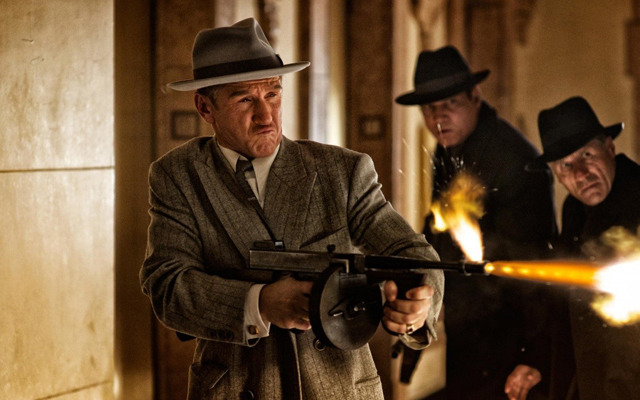 Los Angeles has a highly documented history of gang violence and organized crime.  After World War Two there was a well-known criminal that was “wrapping the West Coast up in a pretty little bow,” to quote Sean Penn’s dangerous character, Mickey Cohen. Mickey Cohen had the reigns of Los Angeles and was directing it towards a path of violence, danger, murder, and a whole lot of money in the pockets of the wrong people.

Cohen had bought off the right guys in the LAPD and Fairbanks police squad. His goons were running wild and unchecked through the streets until one ex-military detective in the LAPD chose to take a stand.  Sgt. John O’Mara (Josh Brolin) came back from the war, but never stopped fighting it.  O’Mara took to the streets to fight Cohen head-on. After gaining respect from police Chief Parker (Nick Nolte), O’Mara put together a ruthless, unmonitored outfit of un-bought clean cops in the LAPD to “wage war against Mickey Cohen.” Sgt. Jerry Wooters (Ryan Gosling), Officer Coleman Harris (Anthony Mackie), Officer Max Kennard (Robert Patrick), Officer Navidad Ramirez (Michael Peña), and Officer Conway Keeler (Giovanni Ribisi) make up the “lawless” outfit, having been hand-picked by O’Mara’s wife, Connie (Mireille Enos).

The storyline sequence is clouded when Sgt. Wooters is distracted by the piece of arm candy that accompanies Cohen, Grace Faraday (Emma Stone). The clichés that come with this particular troublesome and predictable storyline are endless. Other than the love-line, though, the overall story behind Gangster Squad is fresh and exciting. I understand since this is a true story, the wiggle room within the actual sequence of events is limited. Yet the writers were able to take this old gang-related storyline and turn it into something almost mystical.  Will Beall (screenplay) and Paul Lieberman (author of the novel “Gangster Squad”) bring details and intricacies to an already well-known historical sequence. Director Ruben Fleischer dove headfirst into this old-style pulp genre of a film.  Fleischer directed other blockbusters like Zombieland and 30 Minutes or Less before taking on this period piece. Unfortunately for Fleischer, this film posed problems far beyond his control.

Fleischer had to deal with countless reshoots, a delayed release, and a storyline with a huge gap—all due to the actions of a coward in Aurora, Colorado. Gangster Squad fell victim to this tragedy due to one single, yet pivotal, scene set in a theater they had filmed.  However, they did not let the terrorist win. The production came back to life to fix the hole in the story that cutting this scene would pose. The production team deserves high praise for this patchwork.  The scene in question would have been very insensitive to victims and their families of the Aurora tragedy.  Gangster Squad’s production team and writing staff did a fantastic job to create seamless transitions and virtually no inconsistencies within their film. This is the reason why, even though I wrote about this film back in May in my Most Anticipated Summer Movies as an honorable mention, the film didn’t debut until January.

The connections both within the cast and between the cast and the audience are very strong. The cast has a noticeable chemistry that in turn creates emotional ties to the audience. So when something happens to one of the characters, all the characters and the audience feel it. Specific praise goes out to both Sean Penn and Josh Brolin. The chess match between their two characters, and the way the two play off of each other’s actions while never meeting for a long time, is incredible.  Sean Penn makes you hate him, while Brolin has you cheering and moaning in all of his successes and defeats. This is one hell of a cast with a ton of star power!

A friend of the Tuesday Movie Men told me that, “this film tries to be too much like The Untouchables,” to which I say is not the film’s fault. Al Capone is in many eyes “the Gangster.” Cohen and Capone are cut from the same cloth, and therefore the films depicting their respective life’s actions are similar.

This film was well worth the wait for me. Even though they went through many reshoots and screenplay fixes the film still shines bright. I give Gangster Squad a score of 4.5 out of 5 stars and a grade of A-.  Give this film a try if you’re into American history and the troublesome past of one of our most powerful cities.

Gangster Squad is rated R by the MPAA, and has a runtime of 113 minutes.  Gangster Squad can be seen in any theater near you! Especially Carmike Wynnsong in Mounds View, Minnesota!

I would like to end this review by bringing up another film due out March 3rd, titled Emperor.  This film is about General Douglas MacArthur, played by Tommy Lee Jones, and his task of the clean-up after the United States dropped two atomic bombs on Japan.  The film also stars Matthew Fox as General Bonner Fellers, the general appointed to discover the Japanese Emperor’s involvement in Pearl Harbor.  This film looks action-packed and should be very well portrayed.  I am very excited to see it!

Feel free to leave us comments on our blog at http://www.tuesdaymoviemen.com, like us on Facebook, and follow us on twitter @tuesdaymoviemen, where you can catch all of our reviews and our most recent picks for films!