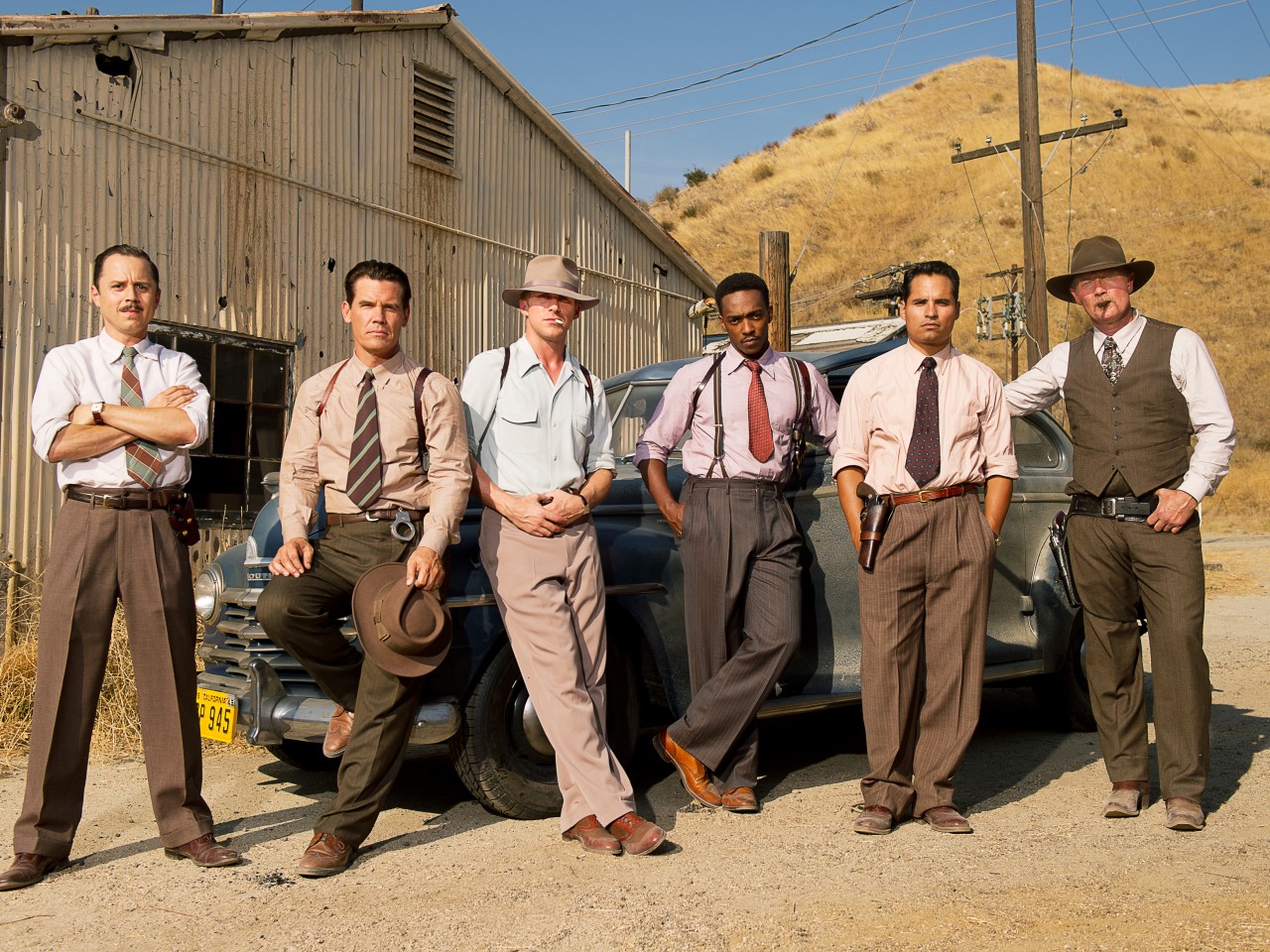 An action movie has to have a good villain. Now, this villain can’t be around merely to be a punching bag. No, this villain has to be evil. You should love to hate this villain, who is not only mean as a rabid bulldog, but is also organized and has a reason behind the evil things he/she does. A villain is the foundation of any action movie. A poorly imagined villain can cause a movie to slip into the shadows of obscurity. But a richly developed villain, a villain who is expertly portrayed onscreen and in the script, can shove a movie into the spotlight and keep it there through sheer muscle. Gangster Squad already had a great villain in real-life gangster Mickey Cohen. But when the casting department signed the brilliant Sean Penn to play Cohen, the odds that Gangster Squad would mewl helplessly in the shadows became slim to none.

The year is 1949; the city is Los Angeles. We’re talking immediate post-World War II America. Hot splashes of neon light hit the night streets from clubs like Slapsy Maxie’s. The boy on the corner will shine your shoes for a dime. Apple pies are surely resting on windowsills somewhere in town. And up in the hills behind the Hollywood sign a Chicago mob member was just pulled apart by two cars. Dogs are now eating his insides.

Okay, hold on. One of these things is not like the other. And I’m guessing it wasn’t the part about the pies.

Well…so not everything is swell in the City of Angels. In fact, there’s a pretty un-heavenly creature doing devilish deeds in L.A. His name is Mickey Cohen (Sean Penn), an ex-boxer, current gangster kingpin who’s fought his way to the top of the organized crime pyramid of the West Coast. He specializes in heroin and brothels, but Cohen’s making a move to take over the wire gambling business from California to Chicago. Overall, Cohen and his gang have made it so the scumbags are the ones who control the goings-on of the city.

With guns, fists, and brains, O’Mara’s group, coined the Gangster Squad by Ramirez one drunken night, begins to loosen Cohen’s white-knuckled grip on Los Angeles. Things start to get dicey, though, when Wooters falls in love with a redhead in a black dress named Grace Faraday (Emma Stone), who just happens to be Cohen’s number one dame. Can O’Mara’s Gangster Squad survive a blazing tommy gun and a fiery love triangle?

You’ll have to see the movie to find out the answer to that question, of course. And I strongly recommend that you go out of your way to buy a ticket to this one. Director Ruben Fleischer (2009’s Zombieland) and screenwriter Will Beall (TV’s Castle), who wrote the screenplay based on author Paul Lieberman’s book, have done homage to the gangster pulp novels that sat on wire racks in supermarkets circa the forties and fifties. Beall’s dialogue is colorful stuff that sometimes snaps out of toothy mouths and other times oozes seductively from the corners of lush lips. Witty one-liners multiply like rabbits in springtime throughout the film, with Gosling’s Wooters being the head honcho in that department, thanks to the keen insight provided by his constant mildly incapacitated state via booze.

Meanwhile, down in the director’s chair, Fleischer works in multiple tones wonderfully. Gangster Squad is, at times, a very violent movie. In fact, I would advise anyone who gets queasy at the thought of seeing a guy get a power drill pressed against his noggin to stay away from this one. A lot of blood is spilled by the time the end credits roll. Faces get dented and squished in long fistfights, bullets find homes in flesh; you get the idea. It’s a gangster movie. There’s violence, and that’s to be expected. But there is also a lot of humor to be found here. If you keep your ear tuned to Beall’s winking dialogue, you’ll chuckle at the playful banter among O’Mara’s diverse squad. A romantic side lives here as well, with two pairs of lovers showcased: Brolin and Enos, and Gosling and Stone, respectively. Both pairs provide much-needed breaks from all the machismo violence by giving us genuine, tenderhearted scenarios, such as when Gosling and Stone exchange flirtatious first words at the bar while Cohen sits only feet away. Well, I didn’t say it would be a relaxed tenderhearted scenario, did I?

You won’t find any duds in the acting department in this one. Brolin, with his chiseled jaw and slicked back black hair, was born to play this vintage good guy role. Gosling harkens back to his role in 2011’s Drive by speaking in a high-pitched voice and smiling a lot—and it works beautifully. Ribisi as Keeler is fantastic and necessary as the Gangster Squad’s moral voice, pondering whether the violence they inflict on Cohen doesn’t make them just as bad as the foe they fight. And Penn steals the show as the snarling bulldog of a man: Cohen. He’s not just hanging around to look muscular and menacing. No, Penn gives some bone-chilling speeches about loyalty, fighting, and corruption that left an indelible mark on me. Heck, I still can’t wash it off.

Gangster Squad is rated R for strong violence and language, has a runtime of 1 hour and 50 minutes, and was given a wide United States release on January 11, 2013.