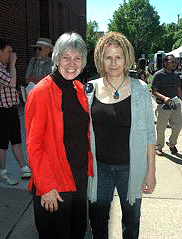 Representative Karen Clark and Hannah Leider celebrate the opening of the Phillips Community Center on May 12 and the passage of the bonding bill that could grant the Center $2.1 million for renovation of the swimming pool. (Photo by Sheila Regan, Twin Cities Daily Planet)

The Minneapolis Park and Recreation Board, at its meeting Wednesday, Oct. 3, will vote on whether to accept a $2.1 million grant to renovate the Phillips Community Pool located in the old Phillips Junior High School building. At the Planning Committee meeting Sept. 19 the motion to accept the grant failed on a 2 to 2 vote.

How could the park board turn down a grant of $2.1 million for a swimming pool in one of the most economically depressed areas in the city? Probably for the same reason a wise rajah in India wouldn’t accept the gift of a white elephant (even though a white elephant is considered sacred) because he knew the care and upkeep of the elephant would bankrupt his kingdom.

Liz Wielinski and other park board commissioners who are reluctant to accept the grant are concerned that the maintenance and upkeep of the pool could mean the closing of other parks in the city because of lack of funding.

Hannah Lieder, the principal organizer and spokesperson for Minneapolis Swims, the group primarily responsible for lobbying the Minnesota Legislature to get the grant, says her group is committed to raising $4 million as an operating fund endowment—$1 million before Dec. 31 and another $3 million by June 2013. She says operating costs of the pool would only be between $200,000 and $300,000 a year. The park board figure of $600,000 a year includes operating and programming costs.

Scott Vreeland, a park board commissioner who supports the project and voted in favor of accepting the grant at the committee meeting said on the Minneapolis Issues List:

“This was supposed to be a win-win where the park board said we could not raise sufficient funds to run an indoor pool without making drastic cuts to other facilities, but a private group (Minneapolis Swims) said they would raise the funds and operate the pool as a community asset without using park board funding. If this effort fails or only partially succeeds, how much are the taxpayers and other park constituents on the hook for? Possibly $653,000 a year? –Which, according to Minneapolis Swims, is the total of operating and programming that they project as the cost of phase 1 and phase 2 (another pool)? That breaks down to: $234,000 operating and $419,000 programming per year. The challenge for the park board commissioners is how to best support this effort without committing to bail it out if it fails.”

Carol Becker, one of two citywide elected officials on the Board of Estimate and Taxation who reviews budgets from the city and the park board, says, “If I were doing back-of-the-envelope calculations, I also don’t see how $4 million produces $600,000 a year plus preserves its principle. I’m not seeing it even producing $200,000 – $300,000 a year while preserving its principle in this economic environment. And how is a long-range capital plan to maintain the facility financed? Explaining the specifics of the financing plan would be helpful.

“Also, if this is completely self-sustaining, then why is the park board involved in the first place? Why not just give the facility to this nonprofit and let it operate it and get the public completely out of it if it can be self-sustaining? Because if this becomes a public burden, then the park board is left having to cut another facility or activity to fund this one. It would be nice to believe there is a free lunch here somewhere, but in this budget environment, there isn’t.”

Annie Young, a park board commissioner who lives in Phillips but represents the entire city on the board, says, “We are elected to make decisions for a very big system that is part of an entire city. It isn’t like Phillips hasn’t gotten anything the last few years—they got some new upgraded equipment at Cedar Field, new great fields at Stewart, a new community center and fields at East Phillips, and a transformed Phillips Community Center with plans for a reconfigured Peavey Park in the works. And we are currently deciding what to do with Waite House in midtown Phillips. Please folks—Phillips has not been ignored.”

According to Council Member Gary Schiff, who represents the area on the City Council, it looks like the votes are there on Wednesday to receive and accept the grant and go ahead with the community pool. But it also seems certain that if Minneapolis Swims doesn’t come up with the operating budget they’ve promised, then the park board will probably pull the plug on the pool.

There are two other indoor swimming pools in the Phillips neighborhood that are available to the community. The YWCA pool at 2121 E. Lake St. is technically across the street from Phillips but on the boundary line. Generally you have to be a member to swim, but on Sundays from 3 to 6 they have Community Swim. The cost is $4 for kids, $6 for adults and $15 for a family of 5. They have a large kid’s pool with a giant water slide, and they have a separate lap pool.

The Wasie Pool, a part of Allina Hospital, at 28th and Elliot is a heated pool. You need a doctor’s prescription to be allowed to use the facility on Tuesday and Thursday evenings from 4 to 6 and Saturdays from 11 am to 1 pm. The cost is $3.