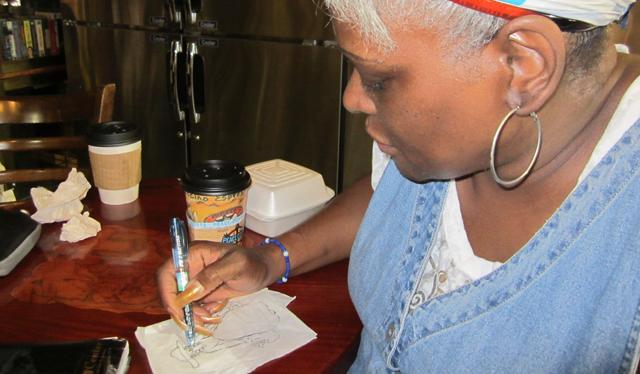 Raelene Ash is one of seven founding artists of The Art Shoppe at the Midtown Global Market. (MinnPost photos by Cynthia Boyd)

Raelene Ash picks up her black-ink pen and a crumpled white napkin, talking as she sketches.

Sitting at the Midtown Global Market, an international bazaar of small Minneapolis businesses, she tells me how her art has been a saving grace in her life, a ray of sunshine guiding her out of the darkness of a botched surgery, divorce, homelessness and poverty.

Quickly, one of her trademark bag ladies comes to life, a romanticized female figure in a broad-brimmed hat pictured from the back side, toting two bags.

“People see them and they tell a story about what they see,’’ says Ash, a mother and grandmother with a streak of silver in her hair and hope in her voice.

Ash is one of seven founding artists of The Art Shoppe at the market, one of the microenterprise partnerships jump-started by A Minnesota Without Poverty in collaboration with Mount Olive Lutheran Church in Minneapolis and the Jewish Community Relations Council.

“The hope is as the business grows, their income will increase as well,’’ says Nancy Maeker, executive director of A Minnesota Without Poverty.

It’s that kind of program A Minnesota Without Poverty hopes to continue funding and why they’re hosting a Summer benefit Concert from 7 p.m. to 9 p.m. June 25 at the Capri Theater in Minneapolis. The event features local actors and singers, including Regina Marie Williams, T. Mychael Rambo, Thomasina Petrus and the Minnesota Church Ladies, an acting troupe formed by the organization to use humor to make a case for helping the poor.

Proceeds from the benefit will also go toward furthering the recommendations of the Legislative Commission to End Poverty.

The Art Shoppe, situated on the Lake Street side of the old Sears Roebuck building, features an array of jewelry, pottery, photography, clothes, paintings and other artistic items for sale and is staffed by participating artists.

The anti-poverty nonprofit collaborating with the two religious groups contributed $6,000 to setting up the small art business and another $6,000 in an interest-free loan to pay rent and utilities for six months. The fledgling entrepreneurs also received 24 hours of business training.

The idea is that this group of artists will slowly repay the loan which they are now doing and eventually become self-sustaining. Artists now earn 40 percent of work sold, with 50 percent invested back into the shop and 10 percent going to payoff the loan.

The social justice aspect of the project appealed to his organization, says Bryan Goltzman, director of the Justice Squared Commission with the Jewish Community Relations Council of Minnesota and the Dakotas.

Consider, he suggests, that there are 599,000 Minnesotans at the poverty line or just above it.

Artists chosen to participate have all experienced poverty and many still fall into the low income category. Most displayed their work to A Minnesota Without Poverty art show some time ago. 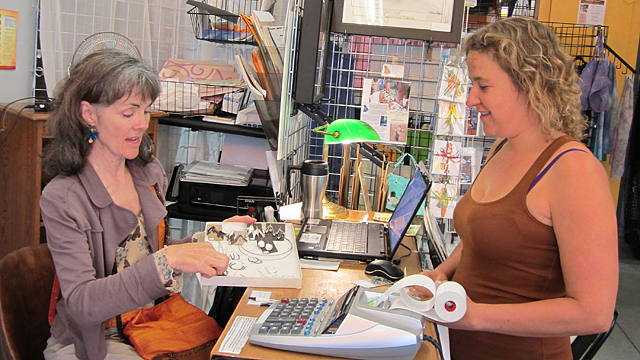 The artists were selected both for the quality of their art and their financial need. Take Ash, for instance.

“Here was someone who was homeless, who was doing this incredibly creative way of doing art. She [was] very gifted but in great need because of her health and her financial situation,’’ Maeker says.

Other artists in the groups have stories just as compelling, including painter Tara Innmon, who when she went blind became a potter, and Aziz Osman, a Somali immigrant who studied art in Florence, Italy, and now is a painter and potter, and jewelry designer Terry Day, who deals with the after-effects of child polio and divorce.

Ash tracks her artistic bent back to kindergarten. “I’ve always been a free-hand artist,’’ she says.

She also has a year of art school on her resume. Though growing up in a large, tightly-knit family in Colorado Springs, she moved to Minneapolis, was married, had two children and later divorced.

Through the years Ash has worked as a family advocate in homeless shelters, as a recruiter for a high school program and as a cook at daycare centers, though now, she says, her physicians advise her not to work.

In 2005, she underwent major surgery. A medical mistake resulted in chronic health issues and frequent episodes of severe anxiety and depression, she says. She lives downtown Minneapolis in communal housing, having her own room and sharing a bathroom and kitchen space.

Recuperating from surgeries, she returned to art as a source of fulfillment and diversion. Seeing small, handled brown paper bags at two for $1, she decided to draw in acrylic paints and colored pencils African-American women carrying bags and depicted on brown paper and canvas bags. It’s her “Classic Bagg Lady” line.

Much of her inspiration comes from observing people riding the city bus. Her images document women going about their ordinary and extraordinary lives: at a farmers’ market, at home primping.

Now her work is available on cards and canvas, as well, and people frame her paper bag art.

Ash takes particular pride in the stories people see in her art.