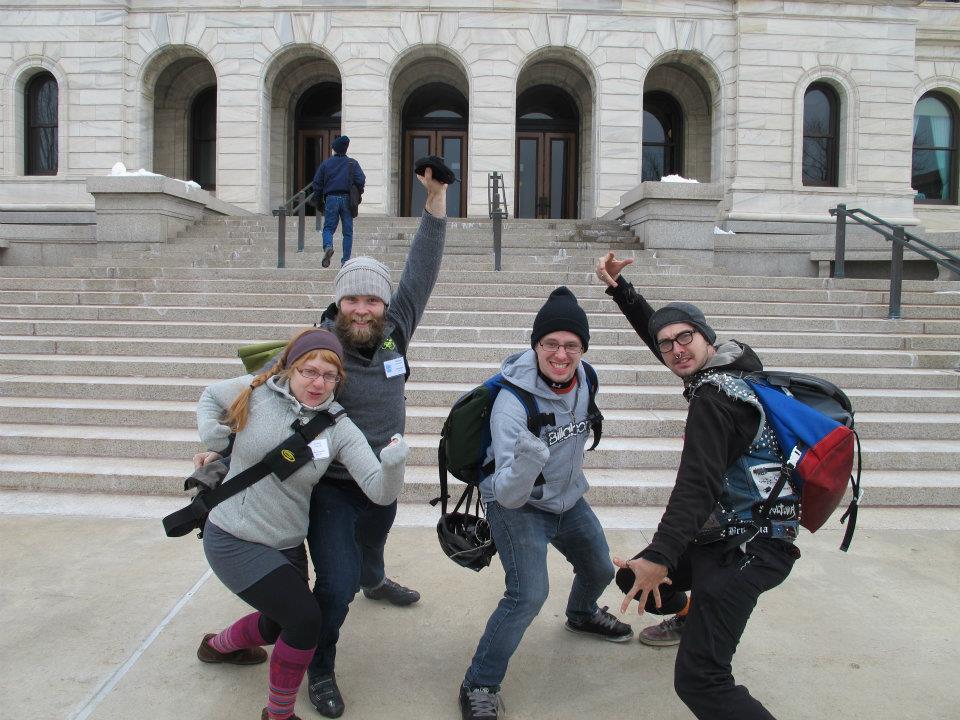 MCTCBC on the Capitol steps (Photos by Mike Jones)

The temperature outside today is 57°F, and spring just gave winter a punch in the face!  It’s a very good day to be a bicycle commuter, as this is pretty much what I’d consider perfect conditions for riding.  I’m wearing a t-shirt and jeans today, the sun is shining, and Mr. Bluebird is on my shoulder.

Yesterday was also a very good day to be a bicycle commuter.  It was the 2nd Annual Minnesota Bike Summit at the State Capitol, and the bicycle advocates were out in full force and well organized to take part in this thing we call representative democracy.  The Summit was organized by BikeMN, the Minnesota chapter of the League of American Bicyclists.

Old Yeller, my usual road bike, had a flat tire last night after rolling over the gravelly mess that is the Wedgetip bridge.  I wanted to bike to the Bike Summit, dang-nabbit, so I decided to go to my mom’s house in East Side St. Paul where I have my other bike, the Spirit of St. Paul.  However, after hanging in the garage all winter, her tires were empty.  I had left all of my tools in Minneapolis, except for a hand pump from the 80s which is as effective as blowing in a straw.  Feeling absolutely no appreciation from my bikes for attending the Summit, I walked to the bus stop, defeated, and feeling somewhat traitorous for taking a bus to a bike expo.  But it’s still better than driving.

I arrived at our base of operations, Christ Lutheran Church, about 15 minutes late.  After snaking through the innards of the basement, I found our meeting space.  The room contained about 100 people at any given time.  I grabbed my packet and nod at a few familiar bike nerds.

The morning speakers are there to organize us participants and tell us how to talk to politicians and what to tell them.  Having a unified message and tone is more effective than random requests for more bike lanes or something.  I walked in towards the end of the second speech (most speeches were ten minutes long) which was by Jay Walljasper, an Editor for On the Commons, a grassroots networking organization.  His speech motivated people about the process of representative democracy.  He was followed by Patience Case from the Minnesota Environmental Partnership who told us some etiquette when talking to legislatures.

Next was Senator Mike Jungbauer, a Republican from East Bethel.  After getting t-boned in his car and hit by a car while running in a crosswalk – both cases involving drivers who were using their cell phones – he became an advocate of legislation penalizing distracted driving.  Currently, distracted driving is not illegal in itself, though using a phone to transmit data via text, email, or the Internet is (MN Statute 169.475).  Also, a driver can run over and kill a pedestrian without even a citation saying “I didn’t see them.”  Thus, BikeMN advocates a Vulnerable Road User Law, which increases the penalties for killing or maiming a vulnerable road user (pedestrians, cyclists, motorcyclists, highway workers, etc.) to a gross misdemeanor.  This creates a moderate penalty for causing harm while driving, as currently the only routes to punish bad driving are misdemeanor traffic citations and felony criminal vehicular homicide.  The latter is rarely prosecuted as the burden of evidence and the overall expenses are high in a felony case.  The former seems inadequate for grossly negligent driving which results in death.

Next, Rachel Callanan from the American Heart Association talked on another important issue this year: Safe Routes to School.  This program has strong bipartisan support as a way to encourage children’s safety, health, and connection to the community.  The push is to create safe traffic environments for students living within a mile or so of their school.  As childhood obesity grows as a problem, many people want to see our kids living healthy lifestyles.  The proposal is currently in the Senate under SF1439 and the House as HF1429.

Dan Collins from the Minnesota Department of Transportation (MnDOT) spoke on our third major issue: a Mississippi River Trail.  This program would utilize existing infrastructure to create a bikeway that would follow the river.  This has obvious health and economic benefits.  Dan says in his early career, he was working for benefits his grandchildren might enjoy.  Today, he works for benefits he plan to see.  He envisions looking at a bike map of the U.S. and thinking “where should I go.”

Nick Mason, Program Manager of BikeMN, gave us an update on relevant activity in the federal legislature.  He described his news as “not-quite-as-good” news.  The American Energy and Infrastructure Jobs Act of 2012 (HR7) at one point stripped all funding from cyclists and pedestrians.  Nick addressed one of the most prominent public relations challenges of cyclists, the myth that we do not contribute funds to the construction and maintenance of roads.  Most cyclists also own cars, so their taxes are virtually identical to non-cyclists, and those who don’t still pay income, property, and sales taxes.  Though this argument holds not a teaspoon of water, it’s a favorite rallying point for blowhard conservative talkshow hosts. 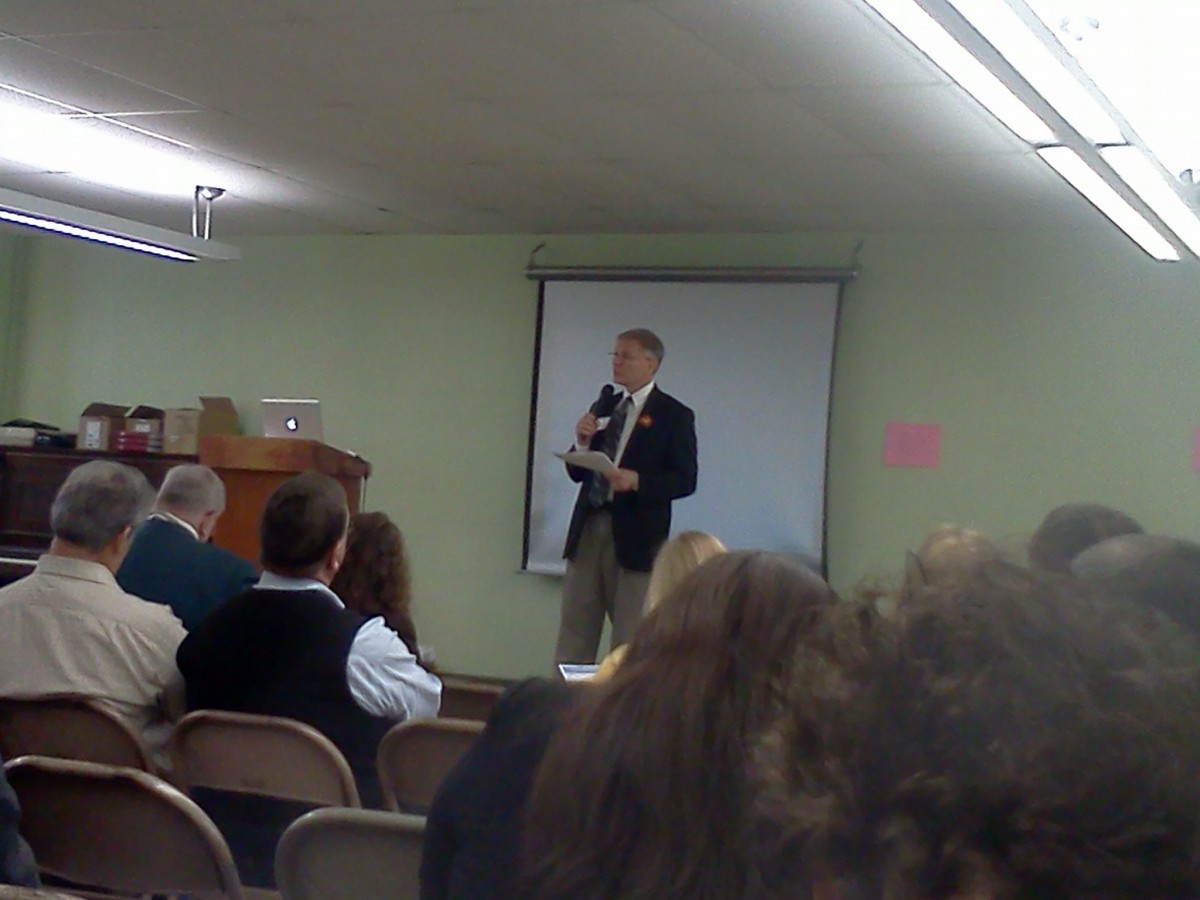 Dorian Grilley, the Executive Director of BikeMN – The Man of today’s summit – summarized the legislative priorities already addressed.  He mentioned other Minnesota cities that were taking great strides in becoming bike friendly.  Downtown Bemidji has installed bike racks in former car parking spots, and Winona has developed a high-quality bike route system.  Economically, cycling contributes $1 billion and 5,000 jobs to Minnesota.  He then brought up a few other legal goals, such as legalizing  electric assist bikes, strobing headlights, and studded tires.

John Edman, Director of Explore Minnesota, and Christine Fruechte, CEO of marketing firm Colle+McVoy introduced PedalMN, an upcoming marketing campaign.  One of their concepts is “Bike Friendly Minnesota,” the concept of “sharing” a road and helping strangers fix flat tires.  The idea is that bicycling brings together Minnesotans in many ways, exemplified by an African proverb John quoted: “If you want to go fast, go alone.  If you want to go far, go together.”

We then broke for lunch.  The food was mediocre (I really hate hard white bread on sandwiches), the conversation was excellent.  As an Uptown resident, I live (until redistricting takes effect) in district 60B.  Also in district 60B is Minneapolis Community and Technical College, and with it, the MCTCBC (MCTC Bike Collective, hereafter referred to by their racing name, the Murder Cats Turbo Crew).  They were representing MCTC by taking a field trip to the summit.  Present were Carlos Espinosa (an old friend of mine), Michael Groskreutz, Jenna Vissell, and Stefen Menzel.  We met a few other locals, including a guy from Quality Bike Parts, Bill Dooley from the Minneapolis Bicycle Coalition, and a few other locals. 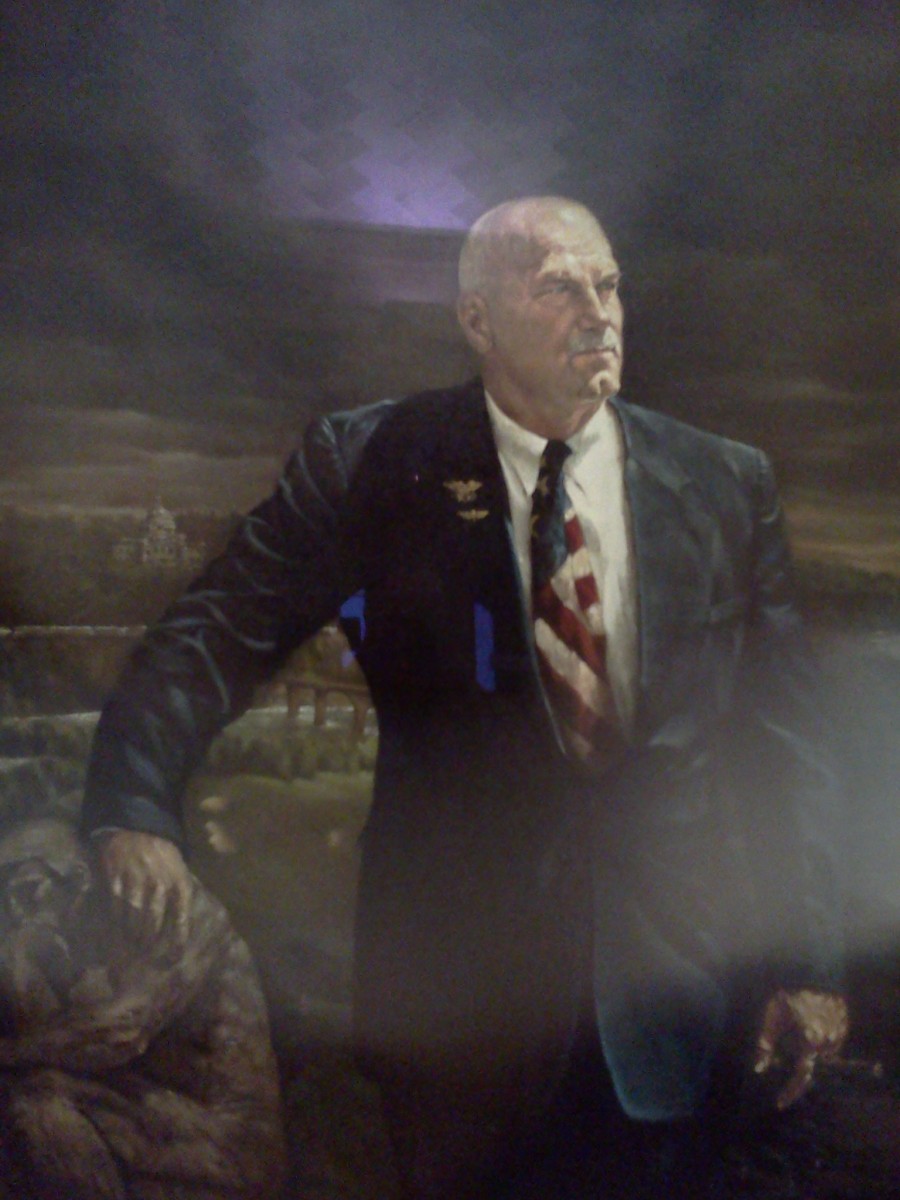 A bit after 1pm, we made our way to the Capitol Rotunda.  On the way, we took a moment to take in the glory of the Governor Jesse Ventura portrait, which makes St. Paul look a lot like Mordor from the Lord of the Rings.  After having more trouble than necessary to reach the center of the building, we entered the Rotunda.  Inside the Rotunda, I had a few minutes of sensory overload and many bodies moved from stand to stand in a relatively small space.  There were pagan images on the dome above and red blinkies left and right.  The stands were sponsors of the summit and some of them brought along bicycles.  I found a chair near the Surly Moonlander (below) with her cartoonishly large tires. 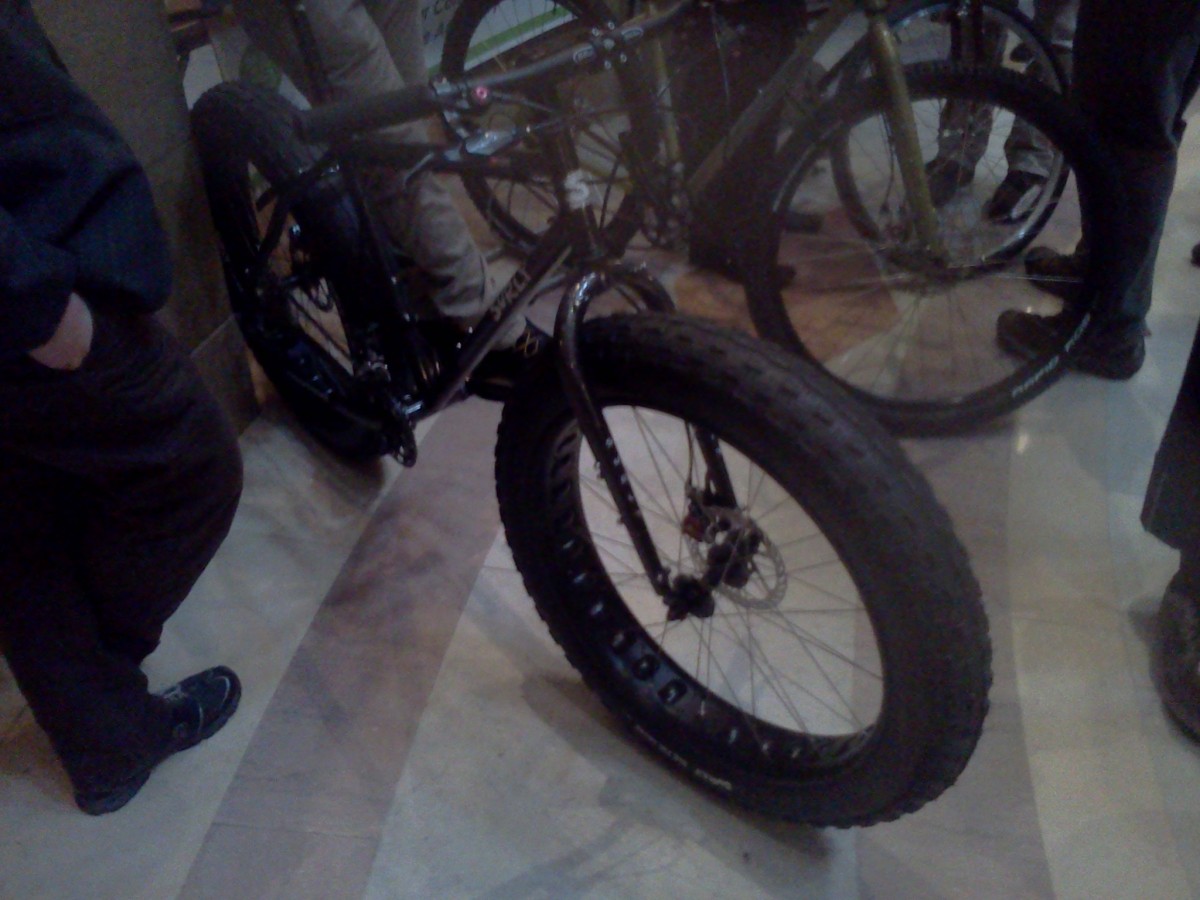 I got to see a few politicians talk before it was time to head to Senator Scott Dibble’s office.  Julie Rosen, a Republican from Fairmont who is an author on the Safe Routes to School bill spoke of getting into politics after becoming a mother and realizing there were no safe route for her kids to bike to school.  She spoke of meeting Representative Phyllis Kahn (DFL, Marcy-Holmes neighborhood) at RAGBRAI, a bike tour / party across Iowa. Senators Mary Jo McGuire (DFL Falcon Heights) and Khan then spoke of forming the Women’s Public Policy and Bicycling Society.  They then announced the formation of a Legislative Bike Caucus for Minnesota.

Soon later, the district 60 residents and the Murder Cats Turbo Crew left to get to Senator Dibble’s office early.  His office assistant was surprised to see so many people (11 at final count) there to see the Senator, so he booked us a nice big room.  I noticed a toy on his desk that was a large bird on a green cruiser bicycle.  I considered bringing it to the meeting, but decided otherwise.

After a brief wait, Senator Dibble showed up and took his seat.  He took off his hospitality button (there was a hospitality industry conference going on) and replaced with one of our bicycle pins.  He described himself as a fair weather cyclist, but also as a strong advocate.  We brought up the issue of Safe Routes to School, and he said he has signed on as a coauthor to that bill.  We then mentioned the idea of legislation surrounding the definition of a Vulnerable Road User, and he suggested the best way to make that happen was to propose it as an amendment to the Omnibus Transportation Policy Bill.  We discussed the Mississippi River Trail, and he says he remembers it being talked about the previous legislative session, but after the Senate more or less collapsed towards the end of the session, the bill died.  After discussing the bills, we snapped a photo together, and I left feeling very invigorated having a senator who not only supported me but was ahead of me in knowing the ins and outs of bicycle advocacy law.

We had a meeting scheduled with Representative Frank Hornstein next, but it was cancelled because he was in session, so we said out goodbyes, and I walked across downtown to the library.  The legislative session ends soon, so the results of our lobbying will come quickly.  Yesterday was a day of words.  Today is a day of action: bicycle action.  I think we can all feel good about that. 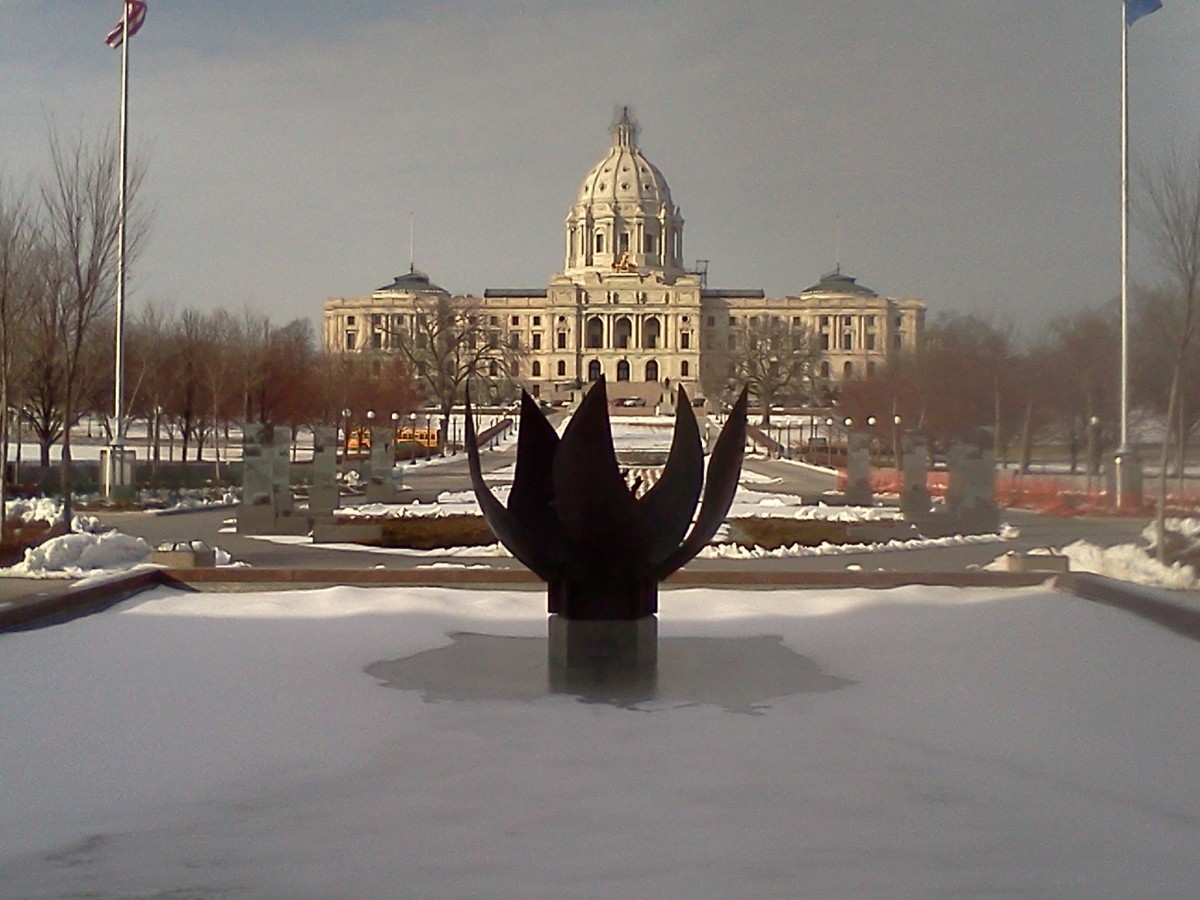