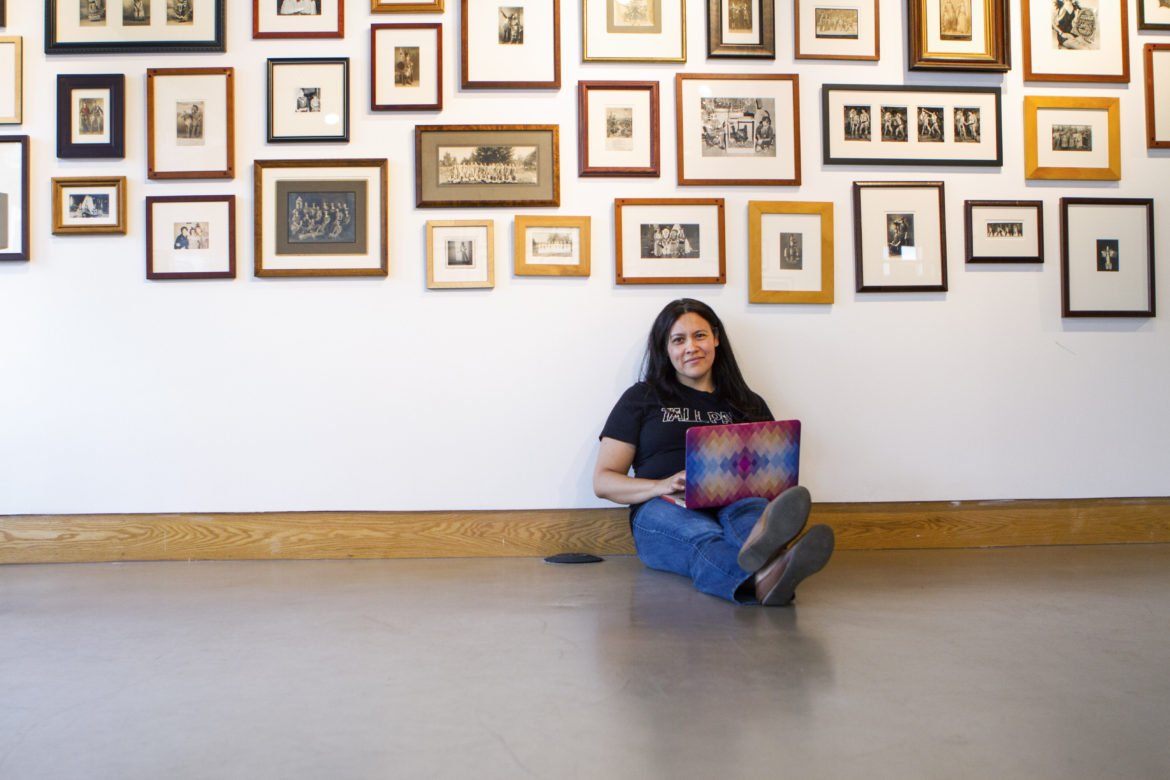 Rhiana Yazzie of New Native Theatre is the founder of an upcoming podcast series titled Little Apple Big Apple. She is one of a growing movement of local femmes and POCI women utilizing podcasting to widely share their own narratives. Photo by Brooke Ross.

Sitting in the café of All My Relations gallery, Rhiana Yazzie, artistic director of New Native Theater, is busy developing a radio play titled Little Apple Big Apple, one of many podcasts she has in the works. Little Apple Big Apple, referring to Minnesota and New York’s vibrant theater scenes, is a comedic play about two Native American women who run a theater company advocating for mental health. Though the play is lighthearted in tone, its premise is based on actors who perform deescalation techniques for people experiencing mental health crises at school, at work or in front of the police. Yazzie hopes that through sharing these stories she will inform her listeners and also provide valuable opportunities to local Native actors, many of whom she creates with through New Native Theater. For Yazzie, podcasts are becoming the next big frontier for new actors looking to break into the theater scene.

Yazzie is only one of many local women breaking into the white and male dominated world of podcasting. Each of these podcasts led or co-produced by women represents a different lens on gender and culture and simultaneously reflects on the meanings of respectability and community. With “Little Apple Big Apple,” Yazzie strives to engage and elevate her community by providing local actors with lucrative skills like professional voice training.

Eventually she hopes to invite veteran national talent and a broader national audience which she said is possible due to the ease and accessibility of recording remotely– another benefit of podcasting that she points to. “Native people around the country will be able to listen in and laugh with us,” Yazzie said. She hopes her podcast will be a springboard for other folks who will be inspired to tell their own stories too.

Current events, health and politics all in one Spanglish podcast

Hip hop artist Maria Isa Pérez and digital community organizer Arianna Genis are already two years into their increasingly popular podcast, “Latina Theory.” “We are trying to unify other artists, activists, mentors, to be able to talk and utilize what we have even if it may be a diamond in the rough,” Pérez said, “but it does shine.”

“Latina Theory” – Pérez and Genis dubbed it the Spanglish podcast – focuses on politics, health and current events all from a Latina lens. Before starting this project, Pérez hosted a radio show for La Mera Buena, where she felt like she was not staying true to her values and felt too restricted by the Federal Communications Commission guidelines. As kindred spirits dedicated to activism, once they brainstormed the idea of a podcast the rest was history. Pérez said she and Genis use their podcast as a way to preserve Latinx and African diasporic cultures and shape a more just and equitable narrative for the future. “How can we be better human beings? and how can we utilize technology to be able to share our tools that have been able to keep us surviving?” Pérez said.

On Saturday, June 17, the day after St. Anthony Police Officer Jeronimo Yanez was acquitted on all charges in the death of Philando Castile, Pérez along with 100 or so people gathered at St. Paul College to address the epidemic of police violence in the Twin Cities following the death of Castile. Pérez was invited to perform a traditional Bomba song called “Campo” and an original song by her band Villa Rosa titled “Blindfolded,” inspired by Nina Simone’s “Baltimore.” With the Yanez verdict still fresh on everyone’s minds Pérez sang and beat her drums – that night it became clear to her how raw her sentiments around this tragedy were and how deeply connected to the Rondo community she felt. She credits her role as an activist, artist and educator, especially in the Rondo community, for her approach to this newest media platform. “’Latina Theory’ let’s us be able to reflect…its influences have grown now,” Pérez said referring to the senators and policy makers she knows are listening, “we may not be able to get in their offices every day but our podcast does.”

The different arms of of Pérez’s community work all culminate here in this podcast. “You have community organizers and you have our youth listening to empower them. Our goal is that, to be able to bridge communication in places that our people still feel we are not welcome to, Pérez said, “and our podcast doesn’t open the door, it pushes it open.” Her career as a musician and her role as an activist are not by choice, they are her duty. And she and Genis want “Latina Theory” to expand the possibilities of what podcasting can be – revolutionary, feminist, informative, pop culture and with an amazing music selection. Pérez said defiantly, “We are here, whatchu gonna do about it?” 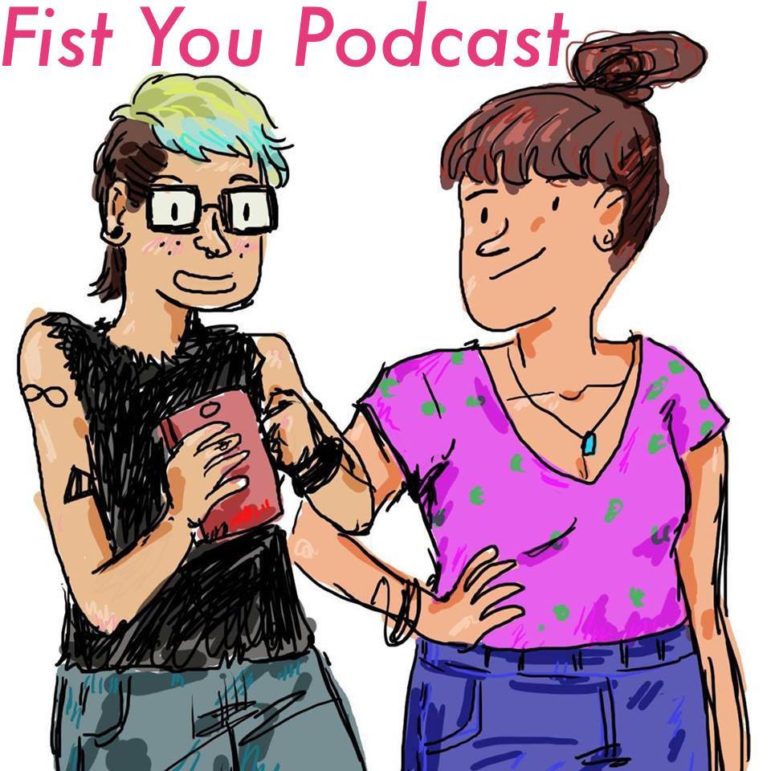 Ethel and Archie are the quirky pseudonyms for the folks behind the podcast “Fist You.” By day, they both have corporate day jobs in traditional offices (hence the name changes), but on the podcast the pair aim to shatter perceptions about queerness and sexuality by exploring sex toys, sex positions, sex nicknames, sex questions and sexual health with their audience. Each episode takes on an unconventional topic and despite how salacious the talk gets, Ethel wants listeners to feel as safe and normal discussing these topics as possible. On a conversational note, the audience is invited to take part in the conversation between these two light-hearted friends. This intimacy and lighthearted tone is candid but also not accidental.

“I think the advantage of keeping it conversational is that it keeps it accessible too,” Ethel said. One of the difficulties that she finds with creating her content is keeping the levity while also staying relevant to the current political climate that polices women’s bodies and sexuality. She and her co-host Archie strive to find that happy medium. Ethel started “Fist You” to help people erase the scariness and taboos that surround sex while embracing the awkwardness and fun of it.

With Fist You, Ethel hopes to change how her audiences perceive sex: “We are hoping that people will listen in and be like there is not just one right way and that it is always changing. You know how I thought about sex now is totally different from how i thought about sex a year ago and i imagine like, in six months, it will have evolved and changed even more.” 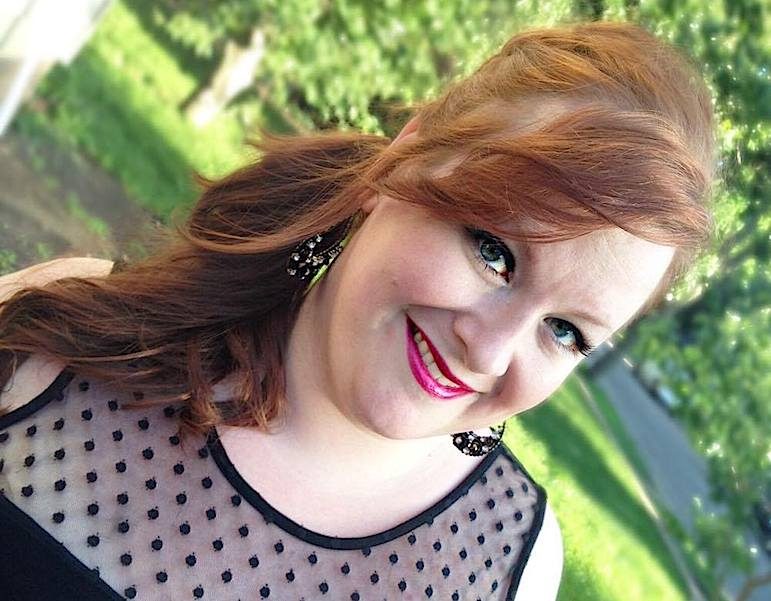 Angela Callais, formerly of the Poly in the Cities podcast

Although “Poly in the Cities” was discontinued, Angela Callais, one third of the dynamic group, continues to study and promote sex education through a new show she’s planning to debut this fall. Callais’ ultimate goal is to destigmatize labels like polyamorous and other so-called-taboos that push too many folks into the margins. Of course, she knows this work comes with its pitfalls and a lot to lose.

“It’s high stakes for people to talk about their sexuality, unless it’s something really normative, and when you step outside of that box there are actual risks at stake,” said Callais. Other podcasters, like Ethel and Archie of Fist You have chosen aliases in order to exist relatively peacefully in the world beyond their homes and tightknit communities. Callais hopes podcasting has more freedom, if not curiosity and anonymity, to offer.

“I think things like podcasting allow people to explore their feelings about things and learn new things all from the privacy of wherever they are,” she said. “Poly in the Cities” often invited different guests to share their experiences in polyamorous relationships and hosted events and fostered social media discourse which Callais hopes to continue in her next project. The accessibility and affirmation that this podcast provided to their listeners created an environment of inclusion, which is really what the podcast landscape is about.

Podcasts provide an engaging, digital community where a listener can feel like they belong. Podcasters like Yazzie, Pérez, Ethel and Callais create an accessible sounding board for their listeners while describing politics, health tips, funny stories or playing games. While there is something unassuming and versatile to the medium itself, these podcasters have used their programming as a valuable tool. They use their voices to dispel myths, work to eradicate stigmas, inform their listeners, lighten up the mood, provide safety and a community for people who might not feel safe, or have the ability to express their sexuality, political beliefs or opinions out in the open.

“We’re dealing with what we have to as women of color in society,” Pérez said. “Podcasting has been able to help mentally, help physically, help emotionally, help spiritually because it has connected us with so many other women and men and children of different backgrounds to say, ‘We’re here.’”

Correction: an earlier version of this story inaccurately stated Maria Isa Perez  sang “Pig Roast” at a July 17th event. This has been updated.