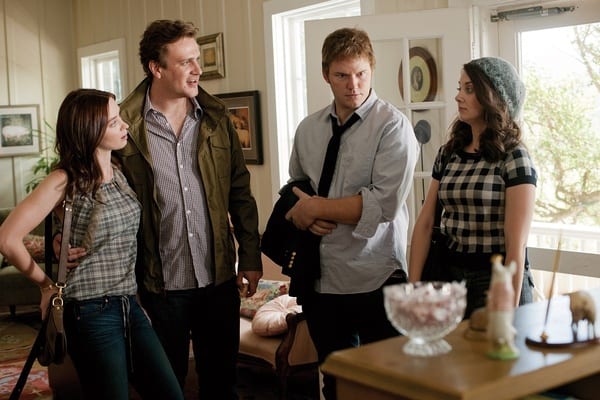 The wedding setting is a favored plot device in many a romantic comedy movie. From Father of the Bride (1991) to Bridesmaids (2011), rom-coms have used the scent of bouquet flowers and the bland taste of white marble cake for climaxes that usually end up with somebody saying, “I do,” after a series of shenanigans has ensued. The wedding/marriage theme, though arguably a tired movie topic because it’s been worn by movie studios more times than a Little Leaguer’s lucky ball cap, will continue to be a mainstay in rom-coms. Prolonged romance portrayed on film, just like in real life, has a tendency to end up taking a detour to Matrimony Maniaville, population: however many people you can cram in the banquet hall for the ceremony.

No stranger to romantic comedies that intertwine witty humor with rowdy raunchiness, Jason Segel and Nicholas Stoller, the two-man creative team behind Forgetting Sarah Marshall (2008), return to exposing the not-so-glamorous side of relationships with The Five-Year Engagement. Like their combined comedy effort four years ago, The Five-Year Engagement explores both the joys and horrors of romance. This time around, however, the tenacious two look into the time period between the proposal and the wedding. That patch of time turns out to be a battleground, and the couple examined in The Five-Year Engagement discovers that battlegrounds are filled with treacherous landmines and sketchy-looking pockmarks.

Tom Solomon (Jason Segel) and Violet Barnes (Emily Blunt) form an easy-going San Francisco couple whose relationship is seemingly solidified when Tom proposes to Violet one year after meeting her at a New Year’s Eve party. After initial sobs and cheers, the two lovebirds find that life can disturb even the most solid of sure things. A psychology student looking to do some post-doctorate work, Violet gets an opportunity for such an endeavor when she is accepted into the University of Michigan. This is great news, but it requires relocation for several years. Tom is comfortable in the City by the Bay. He has a respectably paid gig as a chef in a very happening restaurant, and he is slated to receive the keys to the Clam Bar, a new eatery being opened by Tom’s boss in the near future.

Swallowing his frustration to preserve an ideal relationship with Violet, Tom is immersed in the film’s perspective of Michigan culture, the staples of which include deer hunting, ice scraping, and sweater knitting.

Thus begins the descent into Romance Hell. Screenwriters Jason Segel and Nicholas Stoller show love through a dark lens in the film’s middle section. This is not your run-of-the-mill, light romantic comedy. Touchy subjects of a romantic relationship, such as a rocky relocation, bottled-up frustration, one-night affairs, and stone-cold doubt, are all given screen time. I admire Segel and Stoller for not turning their backs on the dark side of the relationship moon. By integrating the negative aspects of romance into their story, Segel and Stoller are able to give the film realistic weight.

Segel’s acting garners a considerable amount of empathy. As Tom and Violet’s wedding gets continually pushed back to the point where the cutting of the cake seems like a mirage, Tom sinks into a resigned, quiet depression. Having to get up at 2 A.M. to make bread as part of his gig at Zingerman’s Delicatessen doesn’t help lift Tom’s spirits. The man grows a Grisly Adams throwback beard, squeezes into an enclosed deer stand with two other men in the early morning hours, and decides that he doesn’t want to have children—all while Violet is enjoying the hell out of her psychology experiments at the college. Segel gets more depressed here than he did in Forgetting Sarah Marshall.

There is an engaging subplot involving two likeable co-stars: Chris Pratt as Tom’s brother Alex, and Alison Brie as Violet’s sister Suzie. These two Thursday night NBC stars (Pratt from Parks and Recreation and Brie from Community, respectively) get entangled in their own romance and become a more stable couple than Tom and Violet. Throughout the five years the film depicts, Alex and Suzie’s romance is lauded and elevated above their older siblings’ bond by family members, creating funny moments that sneak their way into the plot. Pratt, with his offbeat insight into everyday life, solidifies himself once again as a solid supporting man. Brie also provides plenty of rib-ticklers with her exasperated humor served to the audience in a convincing British accent that’s a complete departure from her All-American crooning on Community.

Many segments in The Five-Year Engagement are funny, some segments hit home in the drama category, and a few segments aren’t memorable and could have been reserved for the “deleted scenes” feature on home release. As a whole, though, the film is a fantastic look at an imperfect relationship.

The Five-Year Engagement is rated R, with a running time of 2 hours and 4 minutes. It was given a wide release in the United States on April 27, 2012.