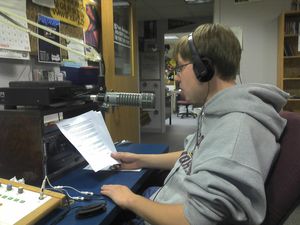 Pausing over breakfast at Don’s Cafe in Morris, 20-year-old University of Minnesota student Taylor Barker shares his passion for the spirit of rural community that the moderate independent student discovered while attending the liberal arts college in Stevens County.

Barker, General Station Manager of KUMM-FM, the student-run radio station on campus, doesn’t have long to talk: he’s due to give prospective students a campus tour at ten.

“I like the small-town atmosphere and values here,”  Barker said, after noting that he’d grown up in Fridley. “My grandparents are from small towns in Renville and Isanti Counties. I feel like people can sit down and discuss issues over a cup of coffee at cafes like Don’s. It’s like the way my grandparents talk things over coffee at their kitchen tables with neighbors.”

Barker’s been drinking decaf while he talks about his development as a straight ally for the freedom to marry. Five years ago, Barker recalls, if he’d heard a news report about  derogatory anti-gay slurs, he’d have said, “Attaboy!”

As Barker got to know more gay men and lesbians, he came to believe that all people should be enjoy the freedom to marry the person they love. This realization fit well with Barker’s belief in individual liberty and limited government.

Indeed, Barker considered himself a Republican until the 2012 election, when he thought that political purity–“candidates competing to see who is ‘more conservative'” — and religious dogma became more important than the ability to consider individual rights and liberties. Like many young voters, he’s turned off by the social conservatism of Republican platform positions that don’t acknowledge the full citizenship of all Americans.

During the 2012 campaign season, Barker spoke out against the amendment to restrict the right to marry.

Whether in politics or professional ambitions, Barker said he’s drawn to a sense of community that values all people.  “I keep coming back to this: we think getting to know people is important in Greater Minnesota,” he said. “Our values of being a good citizen,  part of a community–once you get beyond stereotypes, it’s clear that same-sex couples are like their neighbors and only to marry the person they love.”

Barker had to dash off to introduce students to the little campus on the prairie,  in a townwhich banded together to help elected Jay McNamar while rejecting the amendment by 58.37 percent of the ballots cast.

Photo: Taylor Barker in the studios of KUMM-FM.