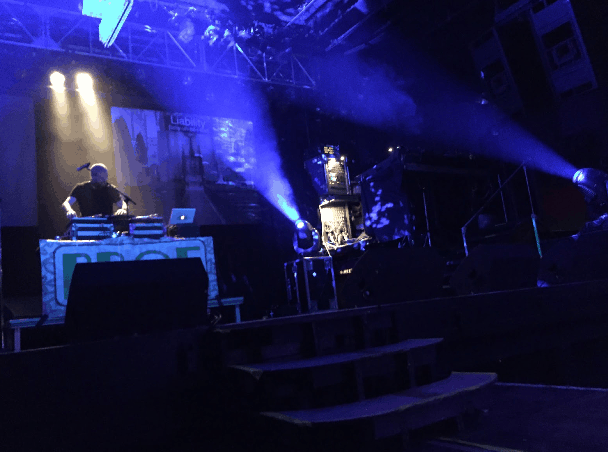 First Avenue was packed on Saturday night with a lively pre-Soundset bash.  DJ Fundo, Blvck Spvce, Bobby can rap, Fashawn, and Prof provided the jams at the official Rhymesayers Soundset Before Party.

DJ Fundo hosted the night and kicked a diverse mix of old and new school, from vintage A Tribe Called Quest to Bobby Shmurda. The crow warmed up to the alternating boom of 808s and trap snares. By the time he got to spinning some Snoop Dogg, the audience was ready to fill in words, and Flo Rida took the teens up with “Turn Down For What.” The venue filled up quickly, an even split of twerking youths and more somber adults, who mostly managed a respectably enthused head bop.

Local newcomers to the game Blvck Spvce were pure energy onstage, spitting songs like “Thought you Knew” and “Finesse” with a certain weed-fueled pizzazz. The trio were all energy and smoke, taking puffs onstage as they performed. First Ave was packed by the time they came on, and the set finished strong. Another opener, Bobby Can Rap popped plenty of jokes and random windmills, as his hype man Malcolm stomped the stage.

California rapper Fashawn played it as cool as fedora suggests, opening with his album starter “Guess Who’s Back.” Out of all the artists on the stage, he was able to get away with more relaxed tracks, and had the crowd bumping with acapellas. Although the mostly frat-bro demographic didn’t catch all of his nuances, Fashawn put on an overall dope show.

Minnesota headliner Prof lived up to his reputation of rocking a stage, coming out to a roaring crowd. He started out singing some soulful chords before giving an ADHD performance, at times pouring water on himself and the crowd. Prof promoted his new album “Liability,” which will be out on September 4. About halfway through his show, Prof went crowd surfing in an actual raft. When he said, “I could be up here forever,” between sets, it was believable.

Rhymesayers events are a must-see for any hip-hop head in the Twin Cities, and this one did not disappoint. First Avenue is a historic venue, and both the practical services and ambiance are among the best in the Cities.

For the full lineup and ticket information go here